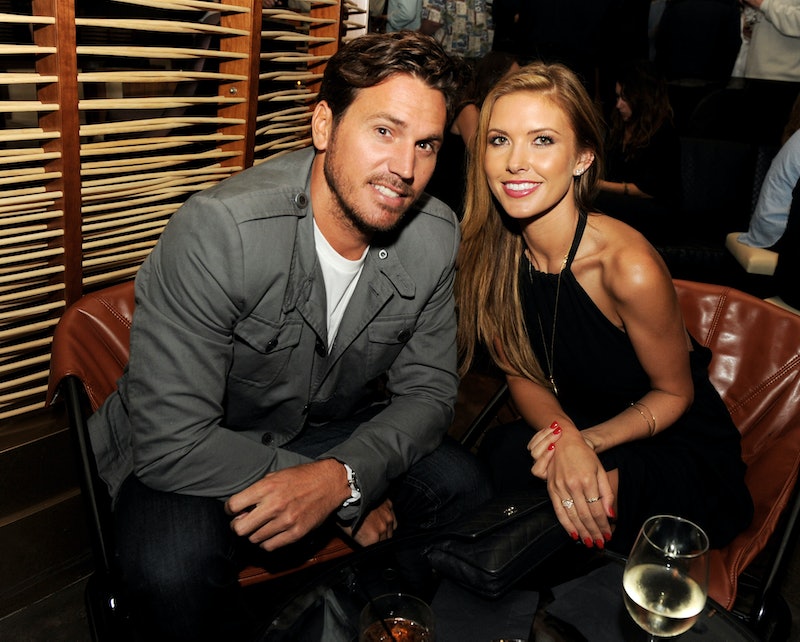 Once upon a time, I thought that there would be no man good enough for Audrina Patridge to give her heart to forever because of the onslaught of drama on The Hills. I mean, it was looking that way for awhile, wasn't it? Thankfully though, I am not as clairvoyant as I thought myself to be back in my middle school and high school years, because Patridge is now engaged to Corey Bohan, who was actually on The Hills a handful of times. And, oh yeah, Patridge and Bohan are expecting a baby together, too. But, who is Bohan? Other than, let's be real, an extremely good looking dude?

Well, Bohan has actually has made quite a name for himself, and one that does not have to do with his reality star fiancée; it's just that his association with The Hills alum has brought him more into the celebrity orbit. According to RedBull.com, he's actually an accomplished BMX Dirt rider. As per his bio on the site, Bohan,

...has won many prestigious BMX Dirt titles over the years, including the first three-peat in X Games BMX Dirt history and victories at Red Bull Elevation, Red Bull Empire of Dirt, and the Vans Dirt and Roll. His creative tricks and widely admired style have earned him the respect of his peers, who voted him Dirt Jumper of the Year at the NORA Cup Awards for five years in a row from 2004 to 2008.

If you're interest is now piqued, you can check out some more info about him below:

He's From Down Under

The BMXer is from Brisbane, Australia.

I don't know about you, but I'm impressed.

He's A YouTube Reality Star In His Own Right

If you haven't caught any of the Red Bull series, "Hanging Foul With Corey Bohan," here's your chance. The Patridge-Bohan baby is going to be natural in front of the camera, I just know it.

Red Bull describes this video as,

The brainchild of Corey Bohan, Bicycle Motocross comes after a lifetime of religious viewing of the original film which saw Nicole Kidman grace the silverscreen for the first time, two years of planning and a hectic two weeks of filming across Sydney to create something that truly paid tribute to the original, with Corey's unique twist.

Watch it. Because it's too good not too.

He & Patridge Are #CoupleGoals

How does that saying go? Oh yeah, couples that genuinely enjoy each other's company, stay together.

Now that I know more about him, Bohan seems pretty damn cool to me.

More like this
Ryan Reynolds Brought Some Famous Friends To Wrexham A.F.C's Last Game Of The Season
By El Hunt
Jake Daniels Just Became The UK’s First Active Football Player To Come Out As Gay Since 1990
By Sam Ramsden
What Is Jeanie Buss' Net Worth? The Lakers President Is Uber Rich
By Hugh McIntyre
Selma Blair Wrote Through The Pain
By Samantha Leach
Get Even More From Bustle — Sign Up For The Newsletter