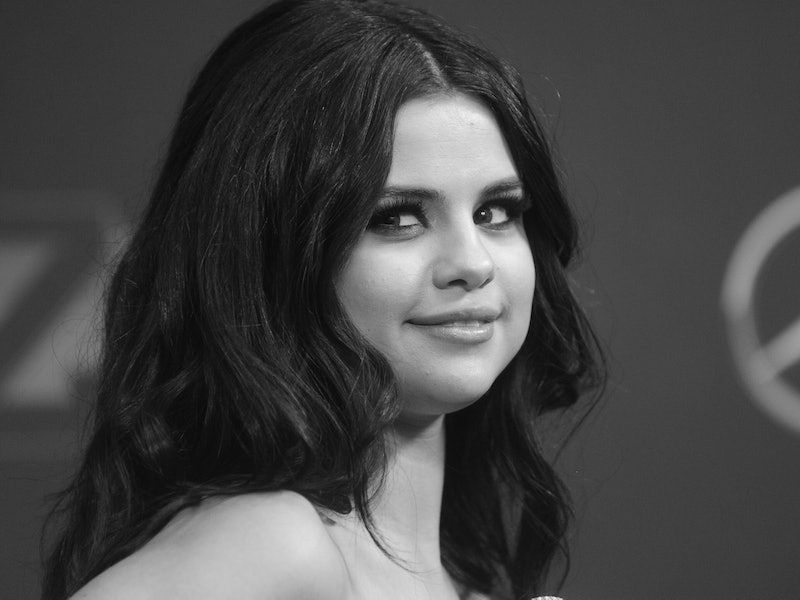 If you find yourself missing Christian Grey and Anastasia Steele and can't wait until 2017 for their sequel, I have good news for you: Selena Gomez is channeling Fifty Shades of Grey in the teaser for her teaser for Gomez's "Hands To Myself" video. It's off her September 2015 album Revival, and a song that many people have cited as their favorite, not to mention it has a hook that grabs you right off the bat. It's almost bouncy, in fact, in a way that belies the more risqué subject matter, which features Gomez's character unable to stop touching the guy she's singing about. (Cough cough, is that you Justin Bieber?) Thus, it really comes no surprise that such a risqué song comes with such a risqué teaser and, most likely, an equally risqué video coming our way.

If you'd asked me what I thought the video for the single might feature, I probably would've guessed it'd be dance heavy with big groups, set at maybe a club? Lots of bright colors and flashing lights, all that kind of stuff that goes along with a bouncy beat. But instead, it seems like she went a completely different direction, keeping things simple and pared down, with just herself and one guy being seen in the video.

Gomez in a bra and short shorts, strutting out with her eyes on the camera, with a confidence that seems straight out of Fifty Shades, to me. We zoom in on her writhing on the floor, running her hands all over her skin, to the point where it seems like she kind of can keep her hands to herself. And only herself, if you know what I mean. Check out the teaser below, which Gomez shared with her Twitter followers on Dec. 18.

Dakota Johnson better watch her back, right? If the "Hands To Myself" teaser is any indication, Selena Gomez is gunning for the role of Anastasia Steele in Fifty Shades Darker.