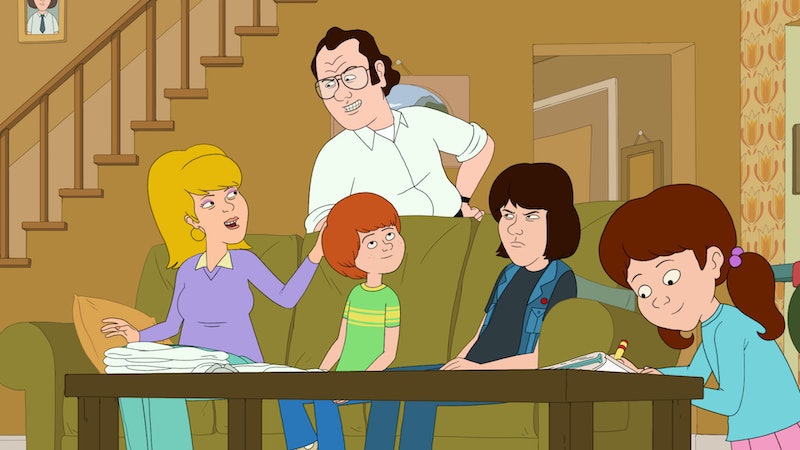 Netflix's F Is For Family is an old story told in a new voice. The sitcom follows the lives of the Murphy family as they maneuver the world of middle-class living in the 1970s. F Is For Family is Netflix's newest animated offering, and created by, written by, and stars its executive producer Bill Burr. He is joined by esteemed actors such as Laura Dern, Justin Long, and Sam Rockwell in bringing his world to vivid, colorful life. Burr's voice is extremely present in the series — comedically as well as literally — and contributes his worldview in another entry into the storied television tradition of the family sitcom.

Like many acclaimed comedians before him like Geroge Lopez, Ray Ramono, and Chris Rock — Burr and his fellow writers take his observations in stand-up about life, love, and the American dream and translate it into the story of a middle-class family just trying to get by. Burr's stand-up is known for being a blunt, profane, and brutally honest takedown of modern American culture, especially the aspects of America that he finds to be taken too seriously. It's this worldview that informs the comedy of F Is For Family.

Burr and company have created a family structure that leans towards the realistic as opposed to the talking dogs and aliens of animated sitcoms like Family Guy and American Dad. A more apt comparison would be The Simpsons or Bob's Burgers, which, like F Is For Family, focus on the efforts of a slightly overweight father in a menial and not wholly satisfying job, a stay-at-home wife, and three children who get into all kinds of trouble.

Early episodes involve family patriarch Frank's need to not be a "loser," as he describes himself — be it through trying to have the nicest television on the block or scaring his son into facing responsibilities. A major theme in the show is the conflict between parents and children, as the love between the two forces is constantly tested in the series amongst a flurry of expletives and threats — and boy oh boy, does this show have expletives. F Is For Family may be a sitcom about a family, but it is far from a family sitcom. The series featured strong language, as well as some strong — negative — portrayals of what the world looked like to middle-aged white men in the 1970s. Expect to be hearing the phrase "Those Koreans" multiple times over the course of the series' six episodes.

While the series occasionally gets bogged down in Burr's desire to portray a pre-political correctness world, it offers insight into how dysfunctional families operated in the latter half of the twentieth century. You get the feeling from watching the show that many of these scenarios were pulled from Burr's childhood, and Frank constantly walks the line between being comically cruel or being a genuinely abusive father.

If you're a fan of Burr's in-your-face style of comedy, then you'll likely be a fan of F Is For Family. It covers a lot of similar ground to its animated family sitcom predecessors but manages to do so while having a voice all it's own, and coming from an incredibly honest — if possibly misguided — viewpoint on American living.