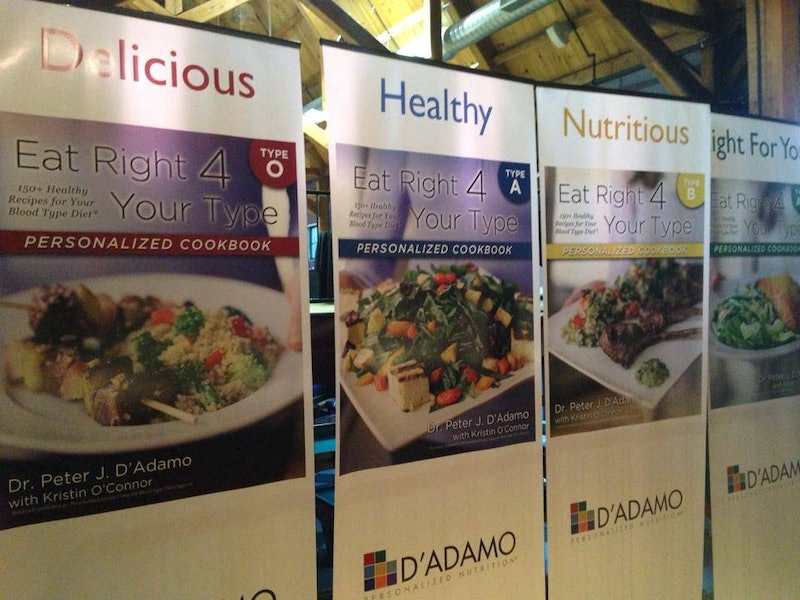 After nearly two decades of making the rounds, something known as the "blood type diet" has been debunked. Created by doctor Peter D'Adamo, the diet's unlikely premise is that people with different blood types have different dietary needs. For instance, D'Adamo thinks people with type O blood need a lot of animal protein, while those with type A fare better on a largely vegetarian diet. Despite the absence of any sound science to back this up, celebrities (such as Miranda Kerr and Cheryl Cole) and lay people alike have been embracing the diet since D'Adamo first published Eat Right 4 Your Type in 1996.

Thankfully, a team of scientists has finally proven the premise of this diet to be false (let's hope once and for all). In a paper published in the journal PLoS One , researchers from the University of Toronto concluded that there's "no evidence" to support the theory behind the blood type diet. The team examined 1,455 healthy adults, collecting information on typical eating habits, blood type, and health markers such as insulin, triglyceride, and cholesterol levels. Ultimately, they found nothing linking close adherence to one's recommended blood type diet plan and likelihood to be in good health. Nor was eating against type linked to any worse health outcomes.

"We can now be confident in saying that the blood type diet hypothesis is false."

It's kind of easy to see why the blood type diet caught on: It was created and marketed by a doctor, it relied on psuedo-scientific claims that sound plausible enough if you don't know a lot about biology or nutrition (as most people quite understandably don't), and some followers did actually lose weight and/or feel better. But that it kind of "worked" for weight loss isn't so surprising — amazingly, none of the blood types were said to thrive on Oreos and pizza. Regardless of blood type, D'Adamo recommended ample whole foods and cutting out the processed stuff. And any time you eliminate or cut back on junk foods, refined carbs, sugars, and sodas, you're likely to lose weight; any time you up your fruit, vegetable, and whole grains intake, you'll likely have more energy, etc.

Marginal effectiveness doesn't make the underlying premise of the blood type diet true — something to keep in mind when it comes to other psuedoscientific diet fads, like the Paleo diet or wheat belly diet. Like the blood type diet, these plans recommend cutting out the crap from your diet and filling up on healthy fare. That's good advice! And there's a good chance it will lead to weight loss or better health. But that doesn't mean these diets work as advertised.