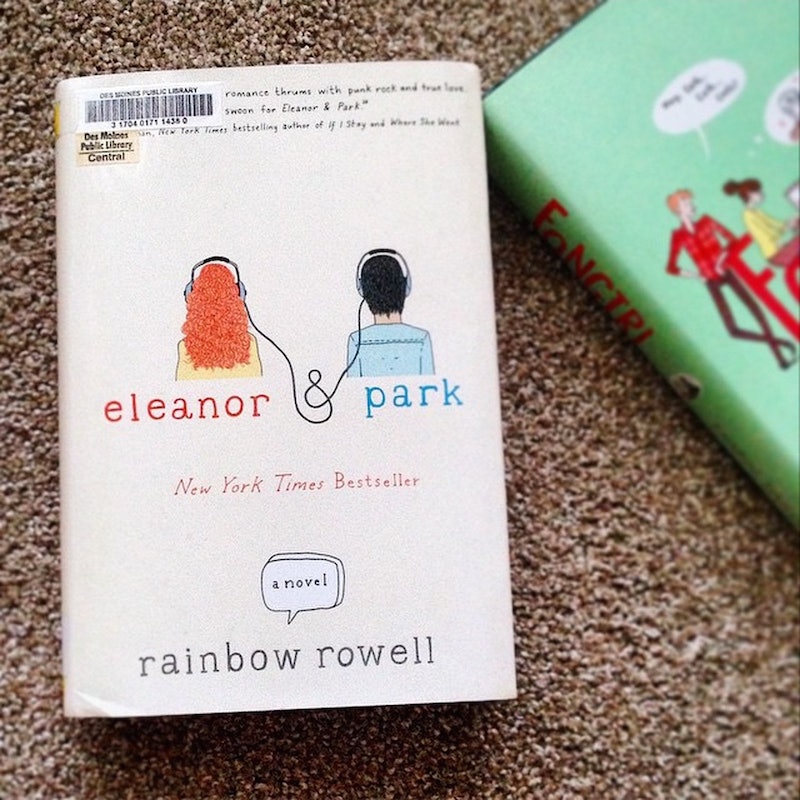 In just a short time, Rainbow Rowell has shot to literary fame with five incredible books in just five years. While Eleanor and Park, her story of a young girl struggling with a chaotic and impoverished home life and finding friendship and love in an unlikely place, won her much of her critical acclaim, she’s had no problems striking out into different genres and earning a diverse fandom for her later books. Of course, the massive fandom she’s earned could also be because Rowell herself is as awesome as her books are.

In interviews, she brings the real and the nerdy, and she does so unabashedly, making her as loveable as the characters she creates. So, naturally, we, real nerdy fans of Rowell’s just have to know what she reads… you know, so we can have something to read while we wait anxiously for her next book and the Eleanor and Park movie.

Well, it turns out Rainbow Rowell’s favorite books are as wide-ranging as her own books, which often find themselves placed into wildly different categories, including YA, fantasy, and even romance. Her nerdy fangirl tastes span from comic books to fantasy to YA and what some might call “serious fiction.” Seeing as Rowell herself defies any limitations or pigeon-holing imposed by genre, it should come as no surprise that she doesn’t allow genre to limit her own reading. Like any book-lover, Rowell’s got a lot of favorite and they’re all over the map. That just means there’s a Rainbow Rowell-recommended book for everyone!

1. The World According to Garp by John Irving

Rowell mentions The World According To Garp as a personal favorite in several interviews and readings, and it makes total sense. Raised in the '70s by a mother she suspects was a bit of hippie (I mean, she did name her daughter Rainbow) and growing up in pretty unusual circumstances, how could she not find something familiar in Garp’s own off-kilter mother and unusual upbringing?

2. Soon I Will Be Invincible by Austin Grossman

A hilarious take on the superhero and villain genre, Soon I Will Be Invincible probably appeals to Rowell’s nerdy side, as well as reflecting her own tendency to poke fun at genre tropes, as she does in Carry On. Rowell praises Grossman’s hilarious novel as “super funny” and for it “gorgeous writing”

3. The Brides of Rollrock Island by Margo Lanagan

Sea witches! Guys: sea witches! Rowell throws Margo Lanagan’s name out there pretty often in interviews as an author she loves and recommends heartily. I admit, I hadn’t heard of the book until now, but a story about a quaint island town and the sea brides that bewitch them? Yes, please. [Editor's note: Yaas, go get it now, it's captivating.]

See? There goes another Margo Lanagan book. Rowell recommends this one in an interview with the ALA. While at its core it’s a retelling of Rose Red and Snow White, Tender Morsels is a whole lot darker than the Brothers Grimm original. Despite its fairy tale setting, it’s a very sophisticated and real story about sexual abuse and healing. Rowell never did shy away from the gritty, real stuff in her own works either.

OK, so I might've fallen completely in love with Rainbow Rowell when I learned that this was a Rowell favorite. Brian K. Vaughan is one of my favorite comic book writers, and Saga is one of my own favorite contemporary comic books. If any new book ever deserved to be called “epic,” it’s Saga. An epic tale of literally star-crossed love, war, and survival, Saga is world-building at its best. Rowell recommends “anything by Brian K. Vaughan” to anyone looking for great comics. This makes her infinitely cooler.

Yep, this Brian K. Vaughan comic gets a mention too!

7. Anna and the French Kiss by Stephanie Perkins

If you’re not a romance fan, you might be inclined to skip a straight-up romance about an American high school senior finding love in Paris, but in an interview with The Toast, Rowell makes a case for romance in books “romance and romantic love are so much a part of most of our lives. The desire for it, the search for it, finding it, losing it, holding on …” And she counts Anna and the French Kiss among one of her favorite books

Rowell’s books might often be found in the YA section, but they appeal to as much to adults as they do to younger audiences. Her reading tastes also extend beyond the YA genre. The holiday in Rachel’s Holiday isn’t exactly of the relaxing, meet-a-boy-and-fall-in-love-in-Paris kind, and despite the light-hearted title, this book gets down to the real pretty hard, and you’ll be pulled along for the ups and downs whether you like it or not. If you’ve read Eleanor and Park, you know Rowell embraces the real herself.

9. Then We Came To The End by Joshua Ferris

There’s a lot of dark in Rowell’s reading choices, but, she’s got a funny bone, too. Noting Joshua Ferris’ Then We Came to The End as one of the more recent books that she loved, Rowell proves that she likes a little laughter in her books. There’s a lot to laugh at in Ferris’ send up of the hilarity and mundane of working in an office.

10. The Graveyard Book by Neil Gaiman

Rowell cites The Graveyard Book as one of her favorite books, noting that, like her own genre-defying novels, it’s one of those books that are “difficult to shelve.”

Part historical fiction, part straight-up romance, Diana Gabaldon’s Outlander also wins Rowell’s praise as a book that is “difficult to shelve.” If you need something to read while waiting for Rowell’s next book, you’ll have your hands full with the several lengthy volumes of this historical, romantic epic.

Like any reader who came to books early on, Rowell’s got a soft spot for the classics. As well as Catcher in the Rye, Rowell also claims love for Little Men by Louisa May Alcott and Brave New World by Aldous Huxley. These books makes it onto our school syllabi for a reason, right?

13. Watership Down by Richard Adams

Now, this classic is where things get a little...different. Watership Down is a book about rabbits, often credited as an allegory of politics and religious stories, though Adams himself has denied that. The story follows a fellowship of rabbits fleeing the destruction of their home by human land prospectors, and all the dangers they face along the way. Rowell lists this as one of the classics she read multiple times in high school.

14. King’s Blades series and A Man of His Word series by Dave Duncan

When someone calls themselves “evangelical” about an author, they’ve got some serious feels for the author’s work. And that’s just what Rainbow Rowell says about fantasy writer Dave Duncan, and with more than 40 novels under his belt, there’s a whole body of Duncan’s work to get religious about. If you were wondering where Rowell got her fantasy chops from, well, the books that Rowell specifically calls out, the King’s Blades series and the A Man of His Word series, are hard fantasy. We’re talking swords and kings and magic. But these books are incrediblt unique. The Man of his Word series, for example, doesn’t have a single human in it (though no, it's not also about rabbits).

15. Among Others by Jo Walton

If there’s one book that best captured some of the strongest and insanely varied themes in Rowell’s own work, it’d be this one. A young girl with a troubled childhood, magic, sci-fi geekdom, and dark truths… Yep, Among Others has it all, but it’s as unique from Rowell’s own works as Rowell’s own books are from each other. Rowell claimed it was the best book she read in 2015.