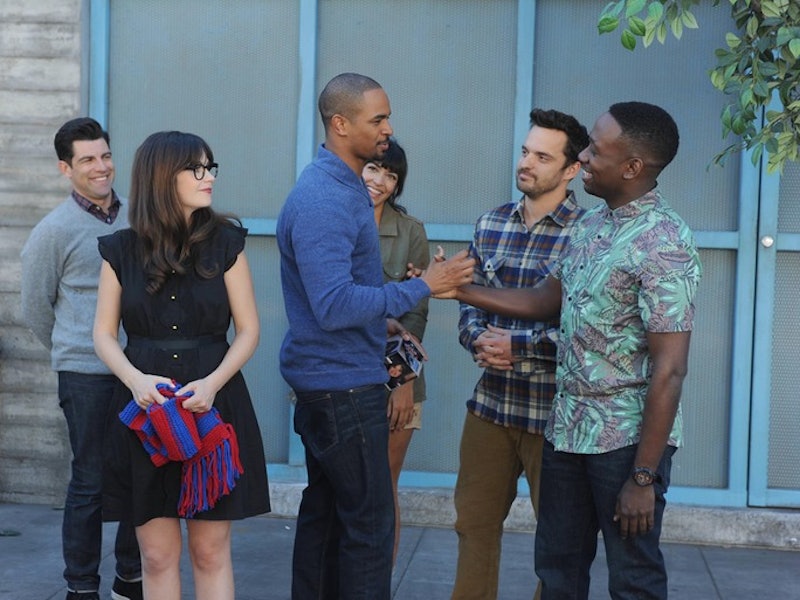 If it seems like so long ago that there was a new episode of New Girl, that's because it was: Season 4 ended all the way back in May of this year, and Season 5 doesn't premiere until Jan. 5 — yes, that's all the way next year. A whole 'nother year! Luckily, though, at least we fans have stuff like this to tide us over until then: Fox has just released a new clip from New Girl Season 5, and it definitely doesn't disappoint.

Also, in addition to not disappointing, it will also leave you with a ton of questions.

When we last saw Jess and the gang, Schmidt and Cece had just gotten engaged, Coach moved to New York, and it seemed like there was a teeny tiny possibility that Nick and Jess might get back together. After that, all fans heard about the new season is that Megan Fox will be filling in for Zooey Deschanel as a new roomie for a few episodes while Deschanel was out on maternity leave — the pretext being that Jess is called away on jury duty and Fox's character sublets her room. For months, that was all we knew. In this clip, though, there's a ton going on: It looks like Schmidt and Cece's wedding is well under way, and Jess — who is once again Cece's maid of honor — doesn't seem to be feeling her best. With so little known about the plot of Season 5, the new clip leaves viewers with a lot more questions than answers.

There's a lot to get through, so let's dive right in.

Inexplicably, Jess is in a motorized wheelchair with both of her legs broken and her arm in a cast. How did this happen? I need to know more.

Throughout the show — even during Cece's first (failed) wedding — there hasn't been any mention of her parents. Could this be our first glimpse of Cece's mother?

Robbie and Schmidt have had a complex struggle for Cece's affection over the years. Why was he invited to this party? You never invite an ex to a wedding!

4. Why Is Schmidt Dancing?

Schmidt surprises Cece and the rest of the guest by popping up during this really epic Indian dance number. It seems like a bold move, but then again, Schmidt's a bold guy.

Dancing at a big, fancy event seems very out of character for Nick Miller. What's happened? Is he just that excited for his friend? I'm going to need more context.

6. What Will This Mean For Everyone?

Cece and Schmidt's wedding will definitely change the dynamic of the group, at least a little bit. Is Schmidt going to move out? Will they find a new roommate? What's going to happen to all of them? So. Many. Questions.