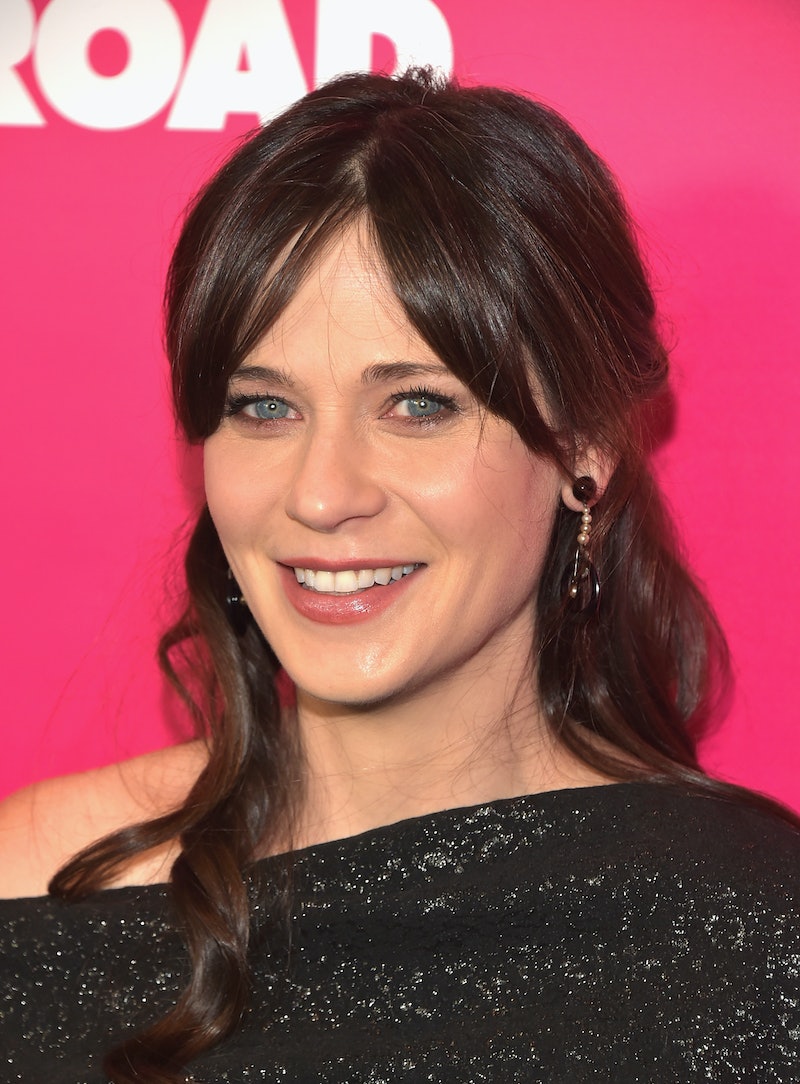 From the first time Zooey Deschanel announced her pregnancy, I was excited about one thing: Her baby's name. Knowing Deschanel, it was practically a given that her offspring will all have unusual yet ridiculously adorable names, but then, the worst possible thing happened. Deschanel gave birth in August to her baby girl, and didn't tell us the name. A month went by, and still no name. Suddenly, it's October, and the world has yet to find out who this baby actually is — until now. At the premiere of her latest flick, Rock the Kasbah, Deschanel finally revealed she named her baby Elsie Otter, and I was right. The name is equal parts unusual and adorable, but I definitely have some questions. Number one: Why would Deschanel and husband Jacob Pechenik include "Otter" in the name?

OK, so of all the animals to include in a name, Otter's a good one. They're cute and sweet, and with both names put together, Elsie Otter Pechenik sounds like the adorable baby girl I know Deschanel's daughter is, even if she's not sharing baby pics just yet. You can't deny it — a girl named Elsie Otter is definitely going to grow up to be a cute, quirky hipster, and maybe she'll even have a love for marine life as her name suggests.

I'm still curious about the decision making process here, though. Why would they pick otters, of all animals? Here's what I'm thinking:

Otters Are Special To Pechenik, Deschanel, Or Both

I'm assuming there's a story here, since this isn't exactly a name you'd find and point to in a baby book. Maybe Deschanel had a beloved stuffed otter as a kid, or they're Pechenik's favorite animal. Or maybe, Elsie's parents realized they were in love for the first time while visiting the otter exhibit at the aquarium? The possibilities are endless.

Everybody knows hipsters love Narwhals. And how embarrassing would it be if you chose an adorable, mystical sea creature to name your daughter after and she goes to kindergarten only to find out there are a million other Elsie Narwhals in her class?. Otter was obviously the safe choice here. She'll never have to go by Elsie Otter P., like I was forced to be called Nicole P. for all of first and second grades. From experience, I can tell you it's the worst. There is nothing funnier to little kids than the letter P, for obvious reasons.

"Otter" Actually Has Nothing To Do With The Animal

Maybe it's a family name? OK, so that sounds like a stretch. But the more I think about it, the more I love Elsie Otter's name. It's cute, it's unique, and it's exactly what I would have expected Deschanel to choose.

Just Look At Them. Who Wouldn't Name A Baby After This?

No matter why they picked the name that they did, it's obvious Deschanel and Pechenik are loving parenthood so far. My only hope is that they break down and offer up an Instagram photo or two of their bundle of joy. I'm dying to see how beautiful she is!