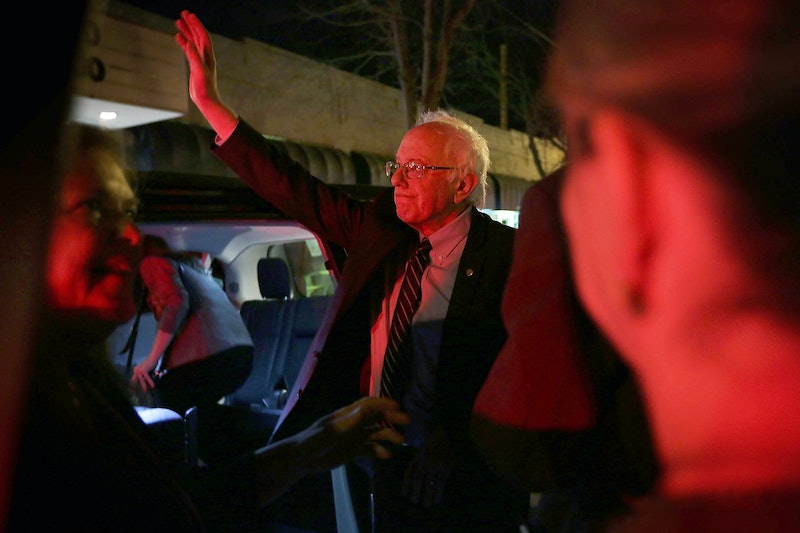 The gloves are off. At Saturday's Democratic primary debate, at least one topic in particular is guaranteed to crop up, and that's the latest vicious scandal brewing between Bernie Sanders and front-runner Hillary Clinton's camp. Saturday's primary showdown comes right on the heels of reports claiming that a Sanders staffer accessed confidential voter data meant for the Clinton campaign within the Democratic National Committee's database — meaning that there are at least a few different ways the Sanders/DNC drama could play out on the debate stage.

In response to news that Sanders staffer Josh Uretsky, who was fired Friday, may have breached Clinton's voter information utilizing a faulty patch in the DNC system, the DNC itself temporarily suspended Sanders' access to his own voter data, something that campaign spokesman Jeff Weaver called "inappropriate" in a televised press conference.

"The DNC, in an inappropriate overreaction, has denied us access to our own data," Weaver told reporters, adding that his staff had attempted to warn the DNC of the software glitch, which also exposed Sanders' data, as far back as October. "The leadership of the Democratic National Committee is actively trying to undermine our campaign."

Responding in kind, DNC chairwoman Debbie Wasserman-Schultz accused the Sanders camp of exploiting an obvious flaw in the system to its own benefit. "That is just like if you walked into someone's home when the door was unlocked and took things that don't belong to you in order to use them for your own benefit," said Wasserman-Schultz, in an interview with CNN's Wolf Blitzer on Friday. "That's inappropriate [and] unacceptable."

The bubbling feud will likely be a hot topic of conversation at the final Democratic debate of the year, which is set to air at 8 p.m. ET (viewers can also catch the debate using a paywall-free livestream on the ABC News site). Here's how it might affect the night's conversation:

Up until now, the GOP has been the party of finger-pointing and ferocious ad hominem attacks. But if Sanders and Clinton decide to go toe-to-toe on Saturday, that could change. Since first entering the race back in April, Sanders has again and again insisted that he would not run a negative campaign against Clinton and any other Democratic rivals. Clinton, however, has made no such promise, in recent days going so far as to accuse Sanders of being sexist after the Vermont senator implied that no amount of "shouting" over gun control would change things.

"When women talk, some people think we're shouting," the former secretary of state shot back in a statement that month. If this same Hillary Clinton makes an appearance makes an appearance at Saturday's debate to hash out the latest DNC scandal, it's a safe bet that Sanders have to break out the boxing gloves and get ready for some heavy hits.

Then again, Clinton and Sanders have been relatively good humored about one another at public gatherings, no matter what sort of back and forth is brewing beneath the surface. "Maybe I shouldn't say this," Sanders told CNN in May. "I like Hillary Clinton, [and] I respect Hillary Clinton ... Is the only way you get media attention by ripping apart somebody else?"

The perpetual peace-maker, Sanders has, for the most part, avoided contention in the party by staying supportive of each candidate personally, choosing only to remark on policy issues. Although it's highly unlikely, if this debate is anything like the last, perhaps Clinton will play the nice-guy card and wave off the scandal in favor of talking about national security and foreign policy the way that Sanders did for her back in October, when he joked that the American public was "sick and tired of hearing about [her] damn emails." However, given the seriousness of the breach and the direct impact it may have had on Clinton's camp, it's much more probable that this won't be the case.

Of course, Saturday's debate moderators, David Muir, Martha Raddatz, and Josh McElveen, will be writing up their own questions — but that doesn't mean they haven't felt the pressure from the DNC to push Sanders to his limit. Whether or not Sanders is questioned about his role in the scandal (or lack thereof) might be beside the point: If the DNC wants a fistfight, it'll get it any way possible.

"Clearly, in this case, [the DNC is] trying to help the Clinton campaign," Weaver said in Friday's press conference, implying that Wasserman-Schultz and the rest of the committee were willing to get their hands dirty. Expect heavier scrutiny over Sanders' leadership abilities and jabs over his accountability to the American public no matter what happens.

Sanders campaign could be on the cusp of a momentous shift. If things start to go south, it's highly likely Sanders, who's a passionate debater, could turn the tide on his rivals and break out a leaner, meaner tone of voice to combat the allegations against him out of the DNC camp. That could mean one of two things: Either the strategy works, and Sanders starts to rocket through the polls as the anti-establishment option for people who believe the DNC is out of line, or Sanders is pegged as the more distrustful of the two top Democratic candidates and starts to fade in the polls, losing ground in key states until he's forced to step aside.

Clinton's camp is likely banking on the second. With her own credibility still shaky among prospective voters, it's almost a guarantee that she'll step aside in the hopes that Sanders will crash and burn on his own. But given the tenacious senator's uphill battle up until this point, he's probably not going down without a fight.