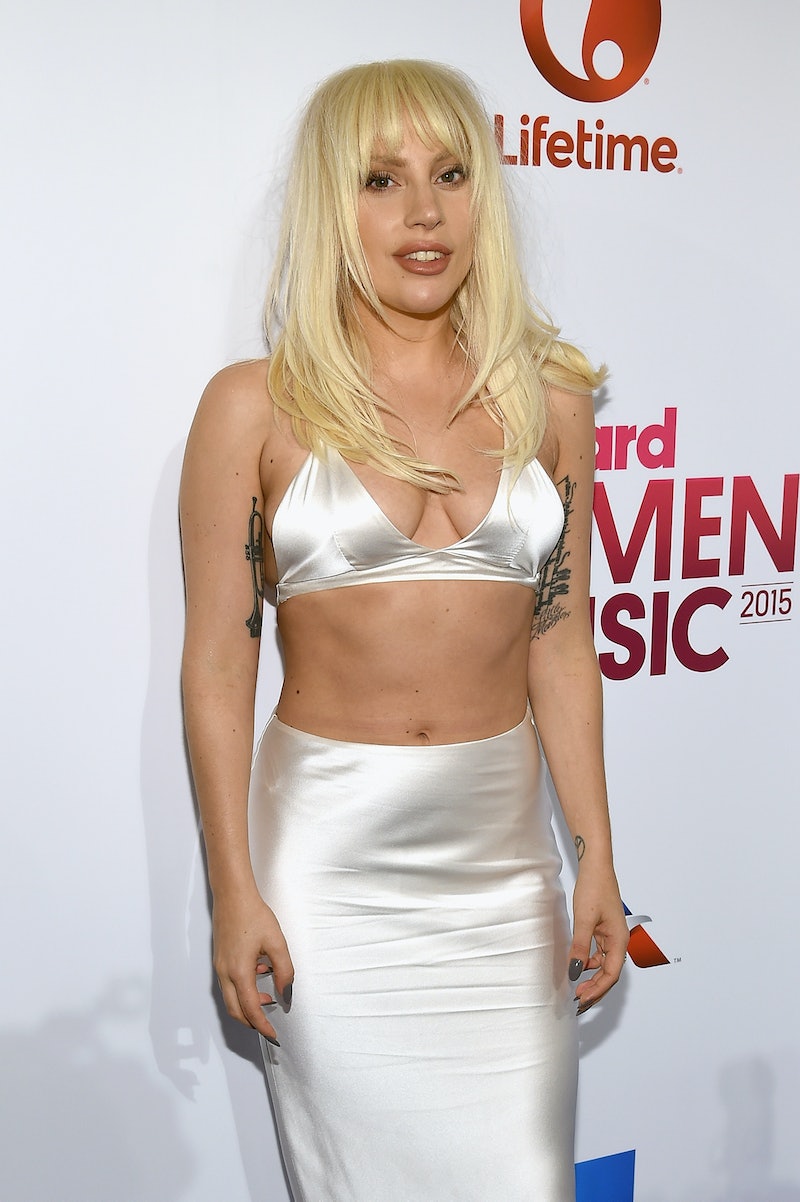 Lady Gaga is hardly unfamiliar with being nominated for or receiving awards. And though the performer has been laying low of late as far as the pop music scene is concerned, Lady Gaga is still raking in the honors. This month, she received her first Golden Globe nomination for her acting in American Horror Story: Hotel. And on Friday night, she was honored by Billboard Women In Music as 2015's Woman Of The Year. This award ceremony has been taking place annually for the past decade. This year, Lifetime broadcast the show to a national audience for the very first time. Viewers tuning in for the show saw a tribute to Gaga that was a full family affair. With her family, fiance Taylor Kinney, and duet partner Tony Bennett in the audience, Lady Gaga accepted the Woman Of The Year award from her mother, Cynthia Germanotta.

It was a touching and personal choice, and I wonder if Billboard or Lady Gaga herself came up with the idea. Other artists received their awards from friends, collaborators, or admirers who are also in the industry. But the last award of the evening was handed to the Woman Of The Year by the woman who raised her. Lady Gaga has consistently voiced her gratitude for the support of her parents since she first broke through in music. The close ties she keeps to her family and her references to her conventional upbringing contrast strikingly with her avant-garde extravagance and daredevil theatricality. Lady Gaga didn't arrive in a bubble or sport a raw meat dress for this particular event, but it's always cool and bizarre in the best way to see her with relatives who are so — for lack of a better word — normal.

Cynthia Germanotta prefaced the award presentation with a heartfelt speech that related two major family moments that occurred 29 years previous. First, her daughter Stephanie was born; and then their family inherited her father's childhood piano.

That family piano was the beginning of and a catalyst for a curious, creative, compassionate and self-driven baby girl. She learned to walk by grabbing on to the leg of that piano and pulling herself up and in the process, managed to reach the keys. She heard the sound and thereafter, day after day, she would go to the piano and press those black and white keys.

Dressed in a vivid red suit and sporting metallic silver eye makeup for her performance, Lady Gaga sat down to a different piano and performed "Till It Happens To You," a song she co-wrote with Diane Warren for The Hunting Ground, a documentary on the epidemic of campus sexual assault. In her speech, she acknowledged her family again for not denying her "right to express [herself] at a young age" and encouraged other parents with creative children to do the same.

Lady Gaga also highlighted the important of events like Billboard Women In Music to give female artists a platform and a voice.

But what I really want to say is that it is really hard sometimes for women in music. It’s like a f***in’ boys' club that we just can’t get into. Sorry, Grandma...And that’s why tonight is so important. Because women provide a wisdom to music that is very unique and special. It is a perspective that no other person can have because we bear life, and we go through things that no one goes through. And more importantly because it’s right. Because we’re all equal.

On a night that was all about women supporting each other, my highlight was watching Lady Gaga receive an award for her vision, talent, and selflessness from her very own mom.

More like this
Tom Cruise Gives His Honest Review Of Lady Gaga’s New Song For 'Top Gun: Maverick'
By Hugh McIntyre
Spice Girls’ Net Worth: The Richest Member Is Wealthier Than The Rest Combined
By Hugh McIntyre
Love Of Huns' Definitive Guide To A Seminal BRIT Awards Moment
By El Hunt
Is Megan Fox Pregnant? MGK Gave A Shout-Out To Their “Unborn Child” Onstage
By Hugh McIntyre
Get Even More From Bustle — Sign Up For The Newsletter