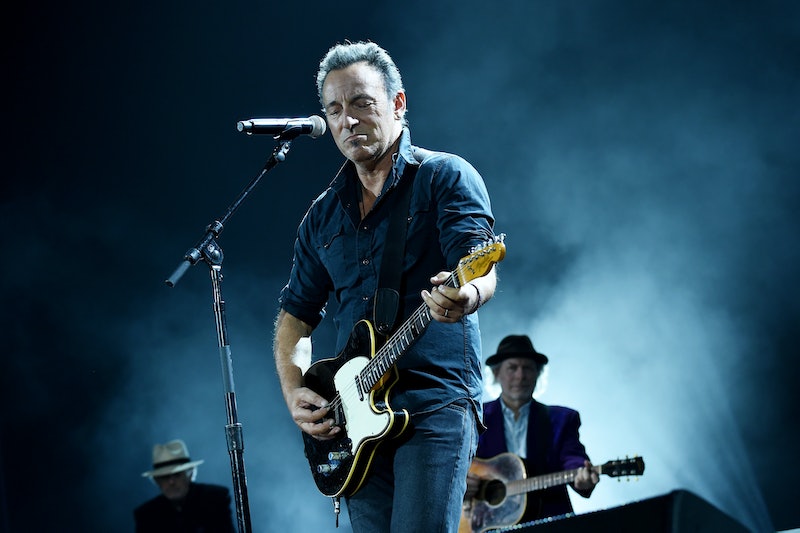 As if the Saturday Night Live Christmas episode wasn't amazing enough thanks to Tina Fey and Amy Poehler's unparalleled hosting talents, Bruce Springsteen was the musical guest — and to say the Boss didn't disappoint would be an understatement. It was his first time on the show since 2002 and his performances of "Meet Me In The City" and "The Ties That Bind" were amazing — but the evening's musical highlight was when Springsteen was joined onstage by Paul McCartney at the end of Saturday Night Live. The pair sang "Santa Claus Is Coming To Town," while the cast, Fey, Poehler, and Maya Rudolph provided backing vocals. (Dressed in Santa hats, of course.)

What better way to close the episode than with a fun, upbeat Christmas song and a surprise guest? The performance was sure to put even the Grinches and Scrooges of the world in the holiday spirit. The episode was highly anticipated, and it felt like a reunion in many ways since it was hosted by two alums, and Maya Rudolph was also prominently featured. This epic closing scene was festive and it was wonderful to see the cast and guests getting into the Christmas spirit together.

My only complaint is that I couldn't be there — I mean, everyone onstage looked like they were having the time of their lives. All the Christmas parties I'll attend this season will just pale in comparison.

This episode was Saturday Night Live's Christmas gift to us — and, based on viewers' social media reactions, it was one of the best presents ever.

I don't know about you, but these performances left me really wishing I could catch a show during Springsteen's upcoming tour. I know it doesn't kick off until January, but I still wouldn't mind seeing him sing "Santa Claus Is Coming To Town" in concert.