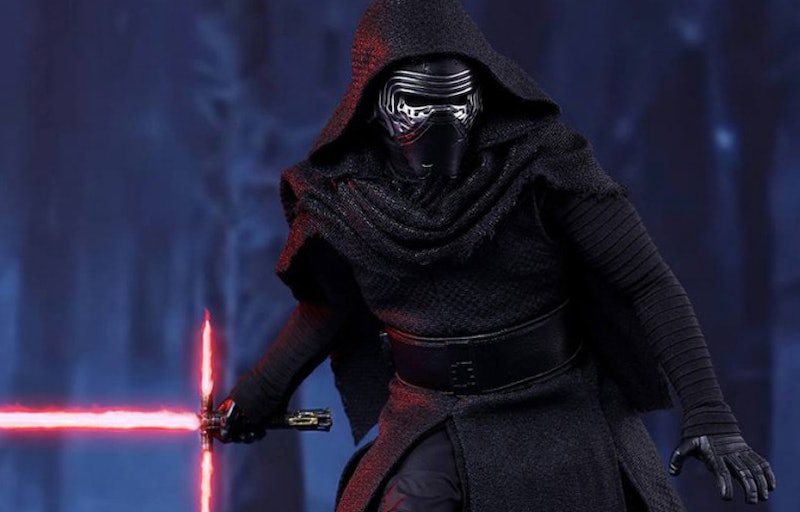 It's an important question to ask, after all: Adam Driver is always superbly on point in any project, and his role as Kylo Ren is no exception. But, does Driver's Star Wars contract extend to further films post-The Force Awakens? I have so many questions about Kylo Ren and how he went from being Leia and Han Solo's son to a major villain, and I'm sure every other Star Wars fan wants to know too — and all these questions hinge on him being alive in future films.

Well, Good news and a huge spoiler alert: Kylo Ren didn't die at the end of Star Wars: The Force Awakens. Yes, he was injured quite seriously during his fight with Rey and Finn, with a lot of visible blood falling to the ground — but still, he was not killed onscreen, and could be seen very much alive, in the last shot we saw of him. Though the mega Death Star planet did explode at the end of the film — and we didn't see him escape from it before — his character arc in The Force Awakens suggests that there is much more to Kylo Ren's story than we have seen so far, so I can't believe that his character would be killed off like that, especially off-screen.

It's great news for Adam Driver fans if Kylo Ren appears in more Star Wars movies. It was so satisfying to see Driver, who notably plays emotionally stunted Adam in Girls , in a complex and physically demanding role. His screen presence fitted the role of movie villain perfectly, and it'd be great to see even more of Driver in the next two Star Wars sequels.

A report on the Daily Mail quotes Kathleen Kennedy, the movie's producer, as saying, "There will be a handful of new cast members in Episode VIII but also all the cast members you see here tonight will be in it as well." Which certainly makes it sound as though Adam Driver will be back... and like Kylo Ren is definitely not dead.

When Kylo Ren kills his father, Han Solo, in The Force Awakens, it feels like an important step for the character. He will no longer be conflicted between his old life and his new role. Surely the next two sequels will deal with his evolution into the epitome of evil?

While we wait to find out more details, it's probably worth watching Star Wars: The Force Awakens a few more times and looking for clues about what happens next. It's sure to be epic.