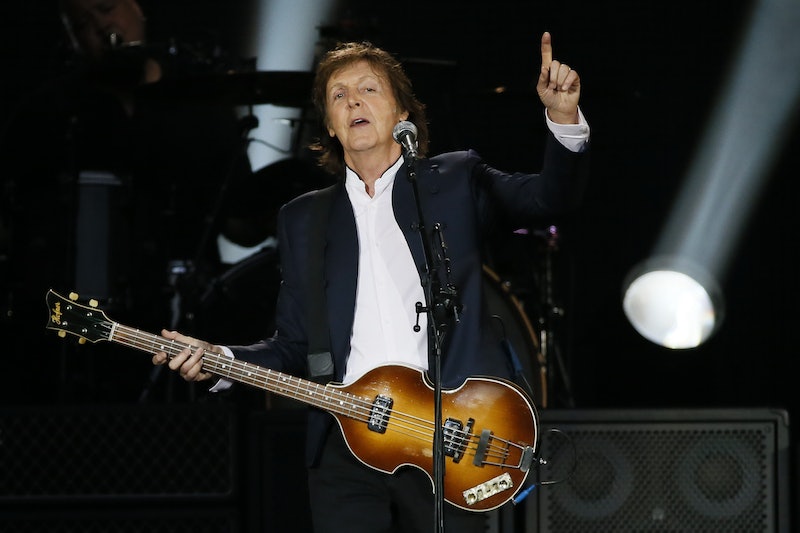 The day music fans have been waiting for since streaming music became a thing might be much closer than anyone thought: According to reports from Billboard, this could turn out to be a very Beatles Christmas. Sources have told the music website "Hey Jude" might show up on streaming services beginning December 24, with the rest of The Beatles timeless collection set to follow shortly after. This Christmas miracle comes after years of The Beatles holding out when it comes to releasing their music on new media platforms. It took six years for The Beatles music to land on iTunes (where it instantly became a massive success, selling 2 million albums in their first week), and while rumors of talks of streaming deals have surfaced before, they have all turned out to be just that — rumors.

What makes this time any different? Though all of the major streaming services all declined to comment to Billboard, the rumors are persisting, and, as a major Beatles fan, I can't help but pay them some attention. If The Beatles did in fact end up on a streaming service, it would be huge — and almost certain to make history. The current streaming record is held by Justin Bieber, but the pop star would likely be no match against the power of unlimited access to The Beatles greatest hits. Imagine being able to queue up "Yellow Submarine" whenever you want to — that is clearly a magical world everyone will want to live in.

While there is no confirmation if this will be happening and making your Christmas brighter and full of superb music, it's worth noting that there is one place where you can stream The Beatles right now: Pandora, the online radio service, already has The Beatles available to stream due to the different licensing agreements involved in "non-demand" radio.

If the rumors turn out to be true this time, then the wait for The Beatles to join all of your other favorites is almost over. It's possible that soon, we will live in a world where not just "Hey Jude," but all of The Beatles' music will be at our fingertips. Honestly, the coolest part of this development isn't even the streaming news — it is that six decades after the band came together, they are still the kings of the music industry.

I think everyone can agree Christmas plus The Beatles equals instant happiness.

More like this
'Bosch: Legacy 'Is Bringing Its Beloved Main Character Back
By Kadin Burnett
Britney Spears Thanks Fans After Miscarriage & Explains Why She's Writing A Book
By Jake Viswanath
Doja Cat Needed Tonsil Surgery & Now She Can't Eat Taco Bell's Mexican Pizza
By Jake Viswanath
Joe Alwyn Reacts To Taylor Swift Earning An NYU Doctorate In A Rare Interview
By Jake Viswanath and Nicole Pomarico
Get Even More From Bustle — Sign Up For The Newsletter