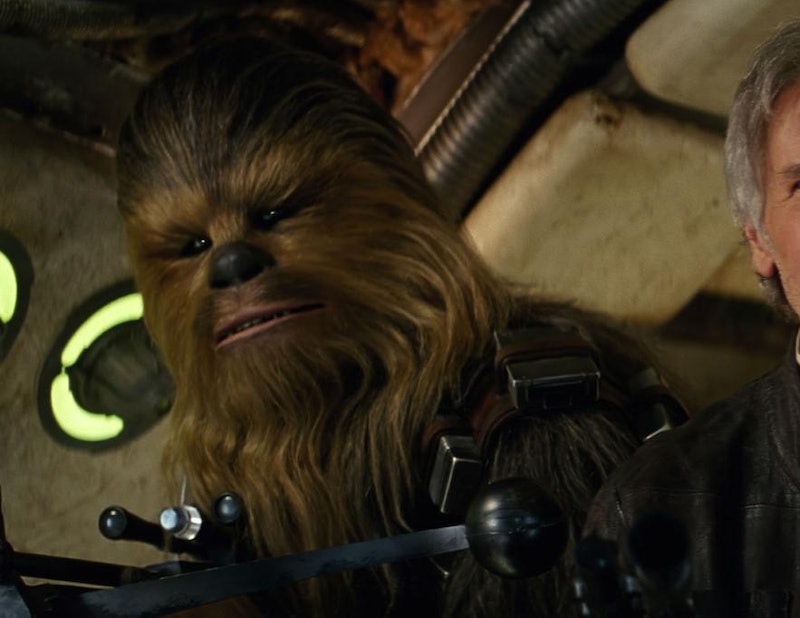 While most people are asking serious questions about Star Wars: The Force Awakens like "What has Luke Skywalker been doing on that island for all these years?" or, "Is Kylo Ren 100 percent evil now?", I'm considering something a bit different. The most important thing I need to discuss having seen Star Wars: Episode VII — The Force Awakens is, "Did Chewbacca get an ombré dip dye? What's behind his glossy golden makeover?" After seeing him in the movie, I'm sure you'll agree this is a pertinent question which we all need answers to immediately.

Knowing very little about Wookiees, I don't know if it's fairly typical for one of Chewbacca's age to go a little blond. As the other cast members have all had makeovers — from Carrie Fisher's new Leia hairdo, to Harrison Ford's silver fox perfectly-primed bed head — it makes sense that Chewie too would get the beauty treatment. So, did Chewbacca get an ombré or do I need to get my eyes tested? Is this Wookiee aging really well, or is there something wrong with me? Whose hair is better — Harrison Ford's or Chewbacca's?

Classic Chewbacca had hair/fur that often looked a little matted. It was brunette with what looked like occasional highlight —, but for the most part it was a deep mahogany, not dissimilar to Harrison Ford's own hair at the time.

Just like the rest of us, lighting makes all the difference when it comes to hair color. And under certain lights, Chewbacca's hair appears red. While there are gradients to Chewie's hair color, in the original trilogy, his tones are deep and dark, like a snuggly bear.

Chewbacca's first scene in The Force Awakens show him with incredibly light hair on his face. While he previously had lighter brown patches on his face and jaw line, all of his hair is now golden brown. It looks as though he went to a salon asked for Jennifer Aniston's golden hues and honey tones — and it looks amaze! Harrison Ford pulls off the silver fox look perfectly, with a choppy, yet not over the top, cut.

Both Chewie and Han Solo are on fleek.

When we get a long shot of Chewbacca, it's clear that the rest of his body has undergone some beauty treatment too. Maybe this is age — and if so, Wookiees age super well! Or maybe Chewie just had a little work done. The honey color certainly suits him, and brings Chewbacca's look up to date.

I rest my case: Chewbacca got an ombré dip dye, Harrison Ford looks as fit as ever, and it's always the right time to change up your style if you want to. Take a leaf out of Chewie's book.