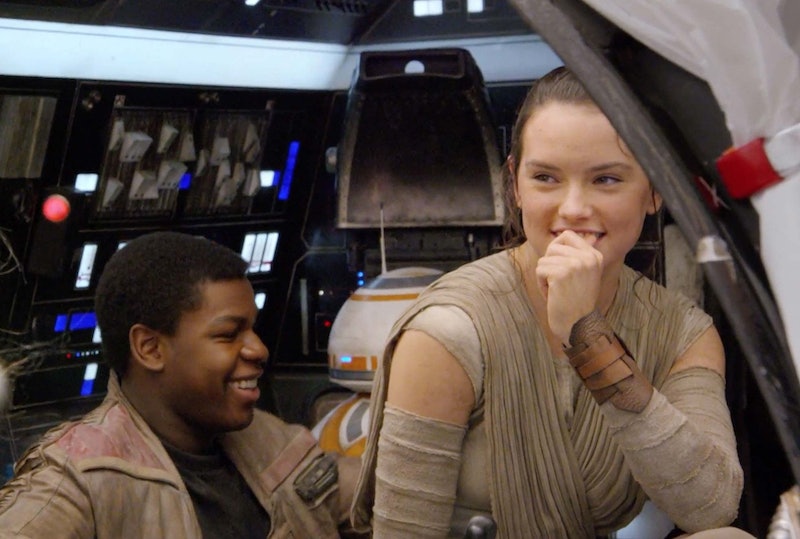 Doesn't it feel like December is really just a countdown to the premiere of Star Wars: The Force Awakens? Monday night, film critics and a few lucky fans were given the opportunity to preview Star Wars before it hits theaters on Dec. 18, and an important piece of info was unveiled to us via Los Angeles Times film writer, Rebecca Keegan. (Don't worry, no spoilers ahead). Apparently, Star Wars: The Force Awakens passes the Bechdel Test (!). Let me reiterate, using Keegan's own words: "Among its many wonderful qualities," Keegan tweeted, "Star Wars: The Force Awakens passes the Bechdel test." YAAAS. In a galaxy pretty damn near (aka Hollywood), women are often portrayed in terms of how they relate to men, so to say something as massively influential as Star Wars takes a stand against this has me, well, geeking out a little bit.

If you're unfamiliar with The Bechdel Test, I'll fill you in. Developed by Alison Bechdel in 1985, the "test" is a way to measure whether or not a film is gender-balanced, and calls for a film to have following criteria in order to "pass": 1) There have to be at least two woman in the film; 2) They must talk to each other; and 3) They must discuss something other than men. (Some add in that the women must also be named.)

Though the Bechdel Test doesn't determine whether or not the film has other feminist qualities (i.e. empowering female role models), it's helpful in assessing gender bias and such bias' pervasiveness in Hollywood. Unfortunately, a large percentage of Hollywood films don't pass The Bechdel Test (according to date reported by Silk, only 55.4 percent passed in 2014). As for previous Star Wars films? None of the three episodes from the original trilogy pass simply because Princess Leia is the only female in the movies that actually says more than a few sentences. As Vulture uncovers in the following video, woman other than Leia account for only 63 seconds of speaking time. (Out of a whopping 23,160 seconds that are present in the entire trilogy.)

Although the Star Wars trilogies might have missed the mark on a few aspects of gender representation, they did provide us with strong, empowered characters like Padmé and Princess Leia, who in turn, normalized the inclusion of female action heroes in the fantasy film canon. I don't know about you, but I'm thinking that foundation — however minor — sure as hell made Star Wars: The Force Awakens the kind of feminist fantasy film the galaxy's been waiting for.

Catch Star Wars: The Force Awakens in all its Bechdel-passing glory on Dec. 18.

Join us for the first episode of The Chat Room, where we discuss what it's like to be a woman with an opinion on the Internet and, of course, Star Wars: