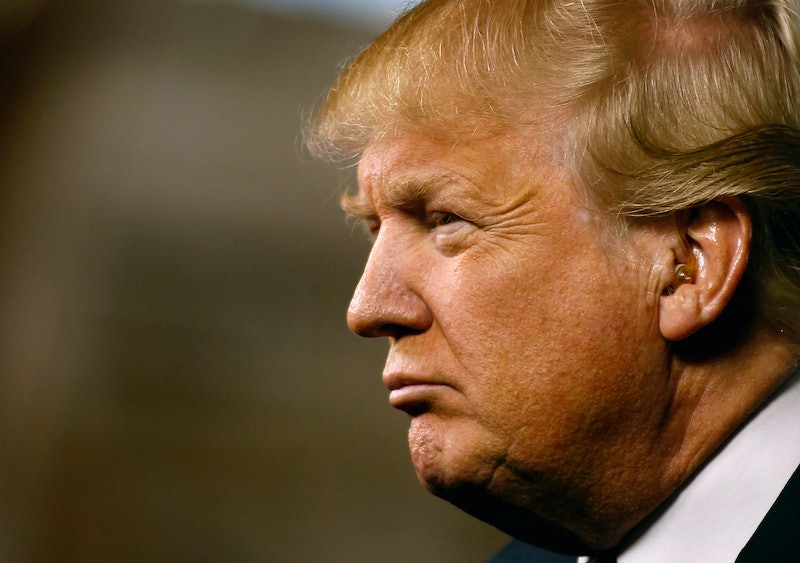 Here's a legitimate surprise: Donald Trump didn't live-tweet the Democratic debate. Not until after it was over, at least, and even then, all he did was make fun of an ABC anchor. No jabs at Hillary Clinton, Bernie Sanders, or Martin O'Malley; The Donald's Twitter feed was silent for the entire debate. What gives, man?

Live-tweeting the other party’s debates is becoming more and more common in presidential primaries, and it’s standard operating procedure for Trump. He repeatedly chided the Democrats during their second debate, with zingers like “O’Malley is a clown” and “Hillary and Sanders are not doing well” filling his Twitter feed. Trump live-tweeted the first Democratic debate as well, observing — accurately — that “O’Malley, as former Mayor Baltimore, has very little chance.” By the end of that night, Trump had picked up more Twitter followers than all of the Democratic candidates combined.

If this has you thinking that Trump is just unstoppably popular, even when he’s not onstage, consider this: During the fifth GOP debate, the candidate who picked up the most followers was Bernie Sanders, who criticized the Republican candidates. Perhaps the denizens of Twitter are simply more interested in hearing the thoughts of the candidates who aren’t on the debate stage, regardless of party.

But if that's the case, they were sorely let down tonight, because Trump had nothing to say. He only composed one debate-centric tweet, though he did retweet some followers afterwards, and it was devoted to insulting ABC host George Stephanopoulos, who provided debate analysis throughout the night on ABC.

One explanation for Trump's relative silence is that the debate was held on a Saturday night, and he simply had other things to do. But wait — Trump started tweeting almost the moment the debate ended. Perhaps he was intentionally avoiding bringing any attention to the Democratic presidential candidates in order to deprive them of media attention? Did he get home late and miss the bulk of the event? Maybe he just decided not to watch it due to general debate exhaustion? We'll probably never know.

In any event, watching your opponents duke it out on stage in front of a live audience and commenting on the event via Twitter is one of the easiest parts of being a presidential candidate. You get to rebut the other party’s arguments in real-time, but because the people making those arguments are still onstage — and thus unable to tweet — they can’t respond. It’s sort of like insulting someone and then plugging your ears so they know you can’t hear them.

On the other hand, debates attract huge audiences, and candidates often lie to those audiences with reckless abandon. From that perspective, it’s nice to have a platform for real-time fact-checking of the candidates statements. As Trump has made clear in the past, though, there’s a big difference between fact-checking a debate and simply mocking it.