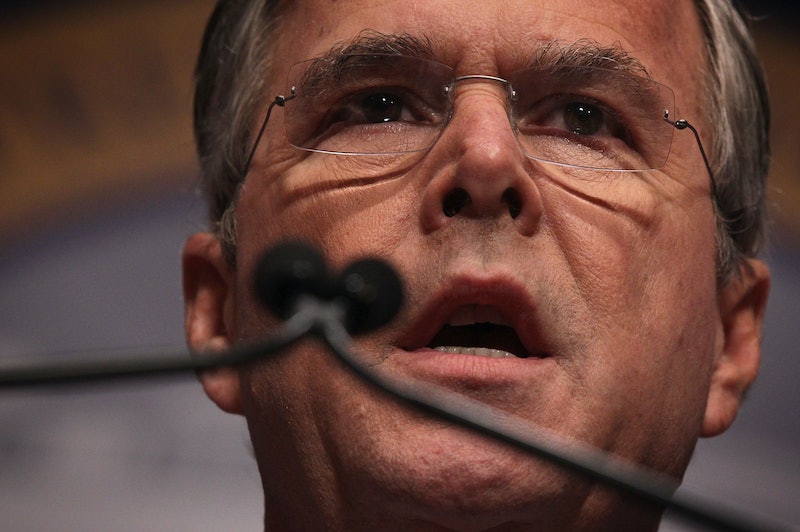 During Saturday's Democratic primary debate, the three candidates eagerly spent the majority of the first half debating the topic of ISIS and the realities of foreign policy going forward. Despite their passionate responses, it was GOP candidate Jeb Bush's sharp criticism of Hillary Clinton, Bill Clinton, and Donald Trump that left everyone feeling twitchy. Tweeting an old photo of the Clintons laughing it up with Trump, Bush pointed out that all three had previously dismissed ISIS as a serious threat to the United States.

"They've said ISIS is not our fight," Bush tweeted, throwing both Republican rival Trump and Clinton under the bus in one go. Viewers at the debate were faced with an uneasy reality: Either Bush was simply attempting to poke holes in Trump's campaign strategy, aligning the billionaire with the Democrats, or Bush had presented them with an uneasy truth. Given the recent slew of violent attacks by individuals pledging their allegiance to the militant terrorist group, did Clinton have some explaining to do?

In Clinton's defense, it seemed Bush's accusation was only half-true. At a campaign rally in early November, Clinton indicated that she would not support a war effort to combat the rise of ISIS, citing the current U.S. budgetary shortfall. "If you have a declaration of war, you'd better have a budget that backs it up," Clinton told supporters in New Hampshire. The former secretary of state then added that she believed the United States needed "to do a better job of understanding the threat that is posed by radical Islamic jihadist groups."

Later that month, at the second Democratic primary debate in Des Moines, Iowa, Clinton reaffirmed her belief that the war against ISIS could not solely be a U.S. effort. "[The war against ISIS] cannot be an American fight," Clinton said, speaking to the Drake University crowd. "We will support those who take the fight to ISIS ... [but] I don't think the United States has the bulk of the responsibility."

In response the following day, Bush lashed out at what he perceived as a failed policy stance. "Hillary Clinton last night said that it's not our fight," Bush lamented during an interview on CNN's State of the Union. "It is our fight. And without our leadership in building a coalition to destroy ISIS, it won't happen."

However, in recent weeks (and in contrast to Bush's claims), Clinton has attempted to parade a more hardline approach to the jihadist group, especially concerning the group's sudden rise and it's unsettling recruiting efforts. On the same day that Bush accused her of not being willing to lead, Clinton told supporters at a gathering in Ames, Iowa that the United States should be "rallying our partners and allies, pulling countries off the sidelines" in order to up the devastation factor against ISIS militants. "There is no middle ground in going after these terrorists," Clinton stated.

While Bush's attempts to cast both the Clinton and Republican front-runner Trump as ineffective foreign policy leaders were noteworthy, they only told half of the truth. If the former Florida governor was hoping to deal a real blow to Clinton's surging campaign, perhaps he shouldn't have cherry picked his facts.