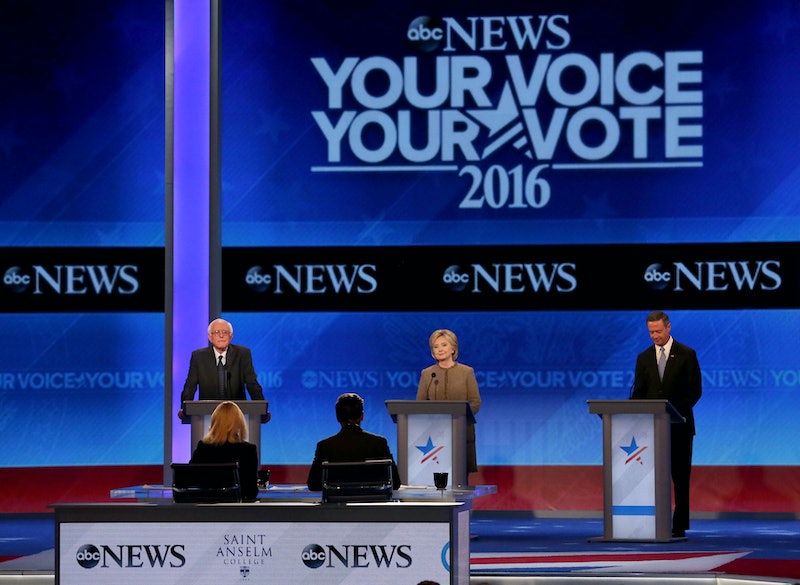 The primetime event took place on not just any old ordinary weekend evening, but on the Saturday night before Christmas. Though Tuesday's GOP debate saw their third most watched event this election cycle, it appeared as if many were disinterested in what was unfolding onstage at St. Anselm College in Manchester, New Hampshire. This Daily Show tweet perfectly sums up Saturday's Democratic debate or at least the viewing public's attitude behind it. In terms of entertainment value, having fewer candidates on the left means generally less chaos and even fewer chances to crack a few jokes.

That's undoubtedly why The Daily Show brought back former presidential hopeful Lincoln Chafee for a much-needed distraction from the humdrum of a well-conducted debate from ABC moderators David Muir, Martha Raddatz, and WMUR's Josh McElveen. The tweet shows that having a nude Chafee streaking across the screen would certainly be more entertaining, if anything. Using both the #DemDebate hashtag and #NotReallyWatching, The Daily Show has been able to craft a bizarre but brilliant parody of the event, even taking on political pundits with the Mad Libs-style tweet reading "Great/terrible moment! He/she just got/lost my vote!"

This style of tweeting shows a marked difference between the way that The Daily Show handled the last GOP debate and their lack of coverage of Saturday's Democratic debate. The show's Twitter account completely ignored the earlier Republican JV debate and instead tweeted out humorous candidate refreshers of all nine presidential hopefuls set to take the stage at The Venetian in Las Vegas. What followed was sharp jokes, GIFs, and take downs of candidates based off of what had been unfolding between them.

The Daily Show's counterpart, The Nightly Show, has taken things one step further by not tweeting a thing about the Democratic debate. Though the silence certainly won't net them any additional followers, it sends a strong statement to social media viewers looking for a bit of levity during the debate. Luckily, The Daily Show offers a respite from this heated showdown.

Martin O'Malley has emerged as surprisingly temperamental and Bernie Sanders likewise has appeared a bit more passionate than usual about smaller issues, such as the terms the candidates had agreed upon for the debate itself. Those wishing that the savvy political humor show would take aim at the Democratic debate need only wait until the next show. For now, they can enjoy the fake but funny world of The Daily Show's #DemDebate #NotReallyWatching coverage.

More like this
Twitter Is In Utter Meltdown After 'Derry Girls’ “Poignant” Finale
By Sam Ramsden
Twitter Can’t Get Enough Of The WAGatha Christie Trial
By Nola Ojomu
How To Support Gun Control Reform Right Now
By Morgan Brinlee and Carolyn Steber
Taylor Swift, Kerry Washington & More Speak Out On Uvalde Mass Shooting
By Jake Viswanath
Get Even More From Bustle — Sign Up For The Newsletter