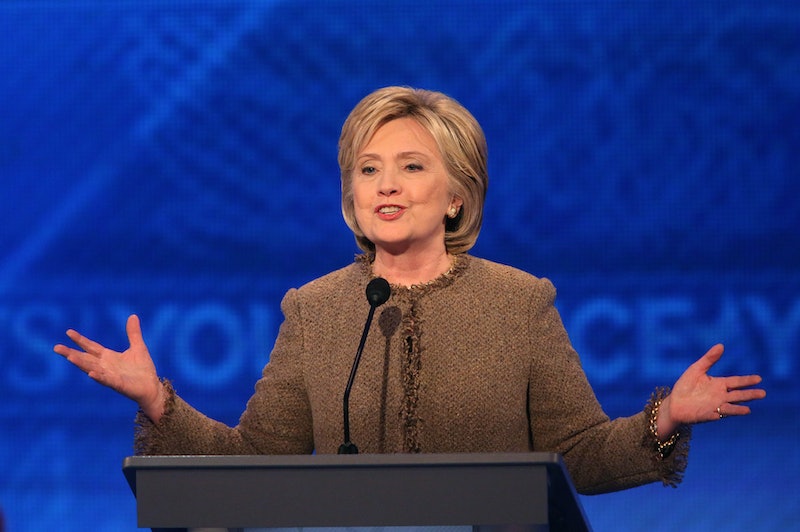 When the third Democratic debate returned from a commercial break Saturday night, Hillary Clinton was late getting back on the stage. With the debate airing live, Clinton returned to her podium after moderator David Muir began his questioning and sheepishly said, "Sorry." This vine mashup of Clinton with Justin Bieber will definitely put a smile on your face as you grapple with all the seriousness of the debate.

Since ABC News' debate happened in real time, the moderators didn't wait for Clinton to join Sanders and O'Malley on stage before starting the next question, but commented on her absence. Muir began: "We want to turn to American jobs, wages, and raises in this country. And we do believe Secretary Clinton will be coming around the corner any minute. But in the meantime we want to start with this eye-opening number..." And enters Clinton.

Although her apology was somewhat timid, she didn't seem embarrassed by the snafu. However, it fit perfectly into Bieber's song, with her voice replacing the "sorry" in his hit song's line, "Yeah I know that I let you down. Is it too late to say sorry now?" As the video of Clinton strolling in fashionably late to the Democratic debate cuts to dancers in Bieber's "Sorry" music video, it's impossible not to laugh.

It's not 100 percent known why Clinton was late, but multiple people pointed out a very valid possibility — there was a line in the ladies' room. Its seems like HBIC Clinton would always get her own private bathroom, but the college auditorium probably wasn't equipped with many personal bathrooms.

If nothing else, this fantastic vine mashup just reinforces the need for a real Clinton-Bieber video. I mean, how have these two not collaborated yet? They're bound to at least snap a selfie at some point, and I vote sooner rather than later.