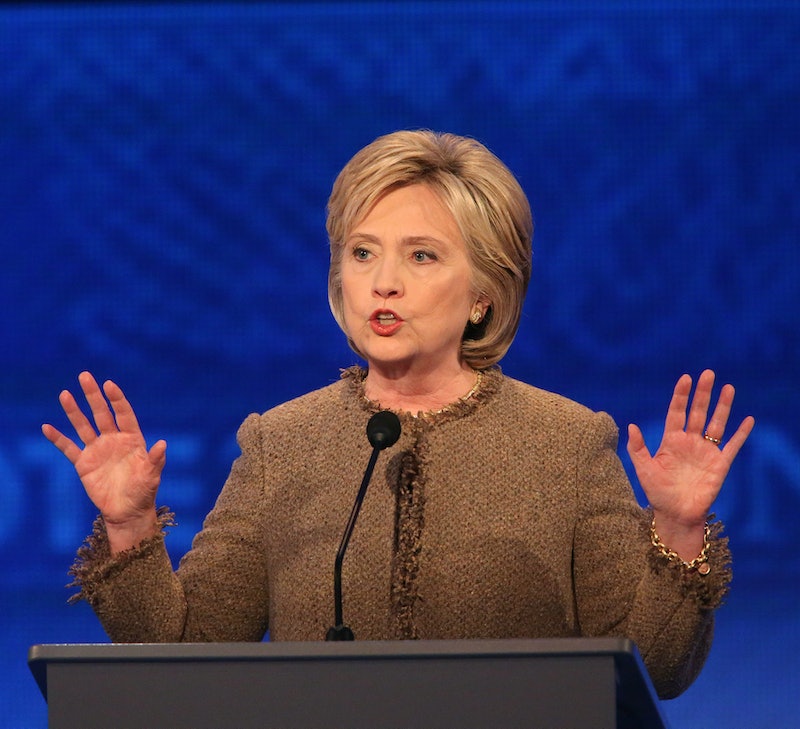 The third and final Democratic debate of 2015 took place on Saturday. It certainly offered many surprises, from the mention of the importance of the Black Lives Matter movement to Bernie Sanders' views on marijuana legalization, but what was truly a shock was a question asked of Democratic front-runner Hillary Clinton on the role of president spouses. When asked if it was time to change that position, Clinton said:

Whoever is part of the family of a president has the extraordinary privilege of making her or maybe his contribution ... with respect to my own husband, I'm probably still going to pick the flowers and the china for state dinners, but I'll probably turn to him as prior presidents have for advice ...

Clinton stands as the only candidate onstage whose spouse has served as president, thus she's the only one with experience as a first lady. She first assumed that role when her husband, Bill Clinton, was elected governor of his home state of Arkansas in 1979. But it was during her time in the White House as the first lady when Clinton began honing in on key issues that her and Bill's foundation, the Clinton Foundation, has continued to focus on, including education and childhood development. Clinton is more than just a political spouse, however, and her response hinting at interior design choices sadly not just overlooked that, but reinforced gender stereotypes that she is usually seen as fighting against.

The fact that the position of the president's spouse would even come into question shows an implicit bias towards the presidential hopeful. The gender stereotype of potentially changing the role of a first spouse reflects poorly on ABC — that the role would only change if a man was the spouse of a president, instead of a woman.

The political powerhouse has loads of experience serving in office. She's been a New York senator and has the most foreign policy experience of the three Democratic candidates, hands down, due to her high profile position serving as secretary of state in the Obama administration. She's proven time and again that she's unafraid to answer difficult questions in meaningful ways, so it's incredibly puzzling that she wouldn't call out moderators for the question, instead touching on the more inconsequential things she did as a first lady.

The question to Clinton did little to add to the debate. Its only silver lining may have been giving Bernie Sanders an opportunity to describe the more positive qualities of his wife, Jane, and why she would make a stellar first lady. Jane's positive qualities aside, asking about the role of a president spouse only because a woman is in the race was a major letdown in an otherwise impressive debate.