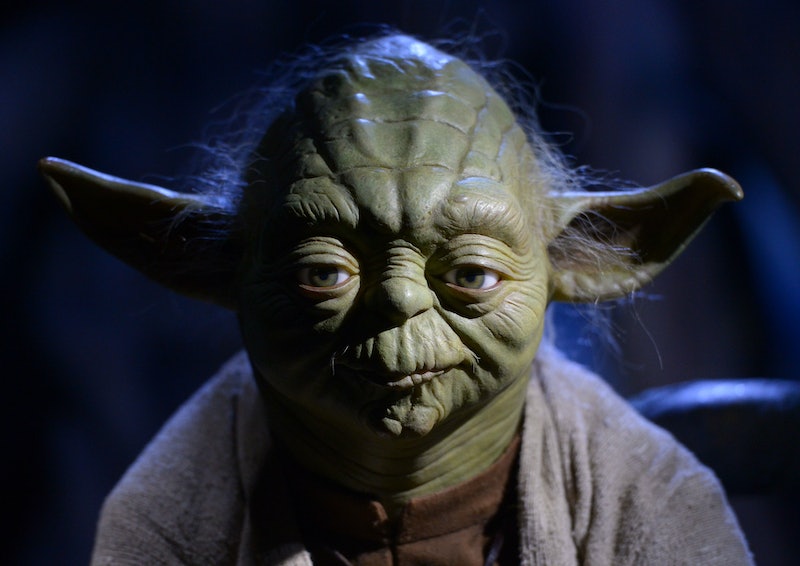 If you're a fan of Democratic politics and a fan of Star Wars, boy did you have a tough choice on Saturday night: to either go see the first new installment in the iconic sci-fi franchise (and the first good one in more than 30 years, by most accounts), or settle in for a night of progressive political debate with your old friends Hillary Clinton, Bernie Sanders, and Martin O'Malley. But you're in luck, because there was actually some cross-over: Yoda endorsed Hillary Clinton on Twitter, after the Democratic front-runner ended her closing statement with a triumphant "may the Force be with you."

Alright, alright, it wasn't really Yoda. That would be ridiculous! Yoda is but a fictional character in the Star Wars series — the realest he ever gets is when somebody's got their hand jammed up the back of his little puppet body (or if you prefer the prequels, when he's a computer-generated lightsaber tornado, but the less said about that, the better). Nor did the endorsement come from an official Star Wars Twitter account. They've got to sell tickets to space opera-loving conservatives too, after all.

But what does that matter when you're having fun? In a tweet just after the conclusion of the Republican debates, Yoda — that is to say @Yoda, which is a hell of a Twitter handle to snag — made it official.

More like this
10 Times Diana & Meghan Spoke Similarly On The Royal Family
By Sophie McEvoy
How The City Healed Five Years On From The Manchester Arena Attack
By Ella Glover
Michigan’s Governor Is “Going To Fight Like Hell” To Protect Abortion Access
By Andrea Zelinski
Oops! The 'Stranger Things' Monopoly Game Has Spoilers For Season 4
By Alyssa Lapid
Get Even More From Bustle — Sign Up For The Newsletter