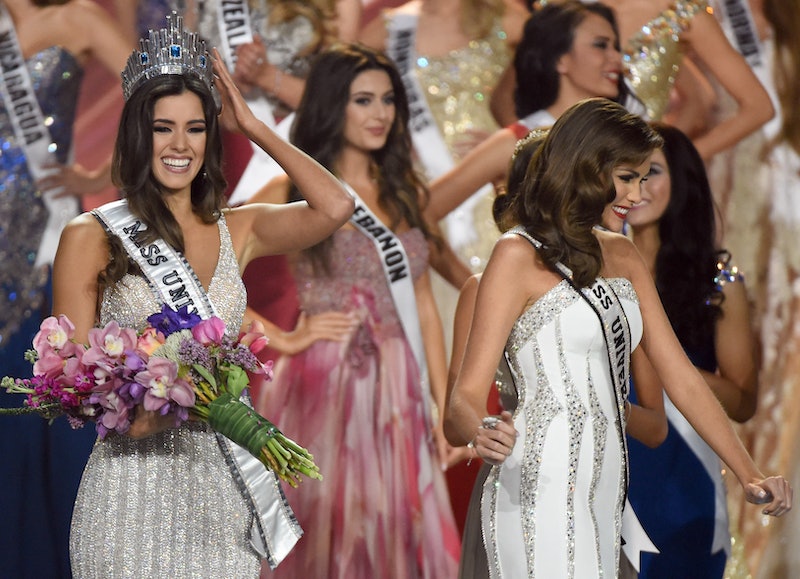 With the Miss Universe 2015 pageant airing on Dec. 20, you might be asking yourself, "When did Miss Universe start?" One might think it was always this big shebang of glitz and glamour, during which the most stereotypically beautiful women of the world banded together to smile big and talk about world peace. But things weren't quite like that from the get-go.

In his book Alabama Afternoons: Profiles And Conversations, Roy Hoffman noted that the pageant was founded after Yolande Betbeze, Miss Alabama and 1951 Miss America winner, refused to pose in a swimsuit during the traditional Miss America tour circuit. Being an educated woman, an accomplished opera singer, and convent-educated, she didn't see the need for parading herself around in a tiny swimsuit, which didn't sit well with Catalina Swimwear, Miss America's main sponsor. As she told them during the sponsor breakfast the morning after the pageant, she was "a singer, not a pinup." According to Sarah Banet-Weiser in her book The Most Beautiful Girl In The World: Beauty Pageants And National Identity , it was because of this that Catalina pulled its sponsorship and created its own pageant circuit with events such as Miss USA and Miss Universe.

According to Miss America's website, Betbeze "feels her actions have been pivotal in directing pageant progress towards recognizing intellect, values, and leadership abilities, rather than focusing on beauty alone." Although that's a bold statement, one can only hope that it's true.

The first Miss Universe was held on June 28, 1952. According to the Ottawa Citizen, 30 contestants competed for the crown and it was won by 18-year old Armi Kuusela from Finland. While it could be argued Miss Finland earned her crown after toe-tapping and pageant-waving for four exhausting hours in front of judges, others thought the whole thing was rigged with a political undercurrent.

According to LIFE, 1952's Miss Italy believed that merit wasn't the deciding factor when choosing the runner-ups. "Finland was given first prize to publicize the Olympics. Miss Hawaii placed second because Hawaii is a candidate for statehood. Miss Hong Kong was given third place to prove the U.S. has no prejudice against Orientals, and Miss Germany got fifth place 'just so [Chancellor] Adenauer will know there will always be a place for Germany in America's round table.' Miss Italy said that only fourth-place Miss Greece earned a prize on the basis of her appearance."

Whether Miss Finland deserved the title or not, the crown didn't stick. She gave up her title to get married just before her year was complete. But while that queen left her reign early, there have been 61 others that have gone the distance. And tonight we'll see who will take the 63rd spot.

More like this
Iris Law's Skunk Mullet Is Not For The Faint-Hearted
By Tomi Otekunrin
'The Circle' Season 4 Star Yu Ling Wu Is Already A Beauty Icon
By Erin Stovall
Machine Gun Kelly Wore A $30K Diamond Mani To The BBMAs
By Paris Giles
Ryan Reynolds Brought Some Famous Friends To Wrexham A.F.C's Last Game Of The Season
By El Hunt
Get Even More From Bustle — Sign Up For The Newsletter