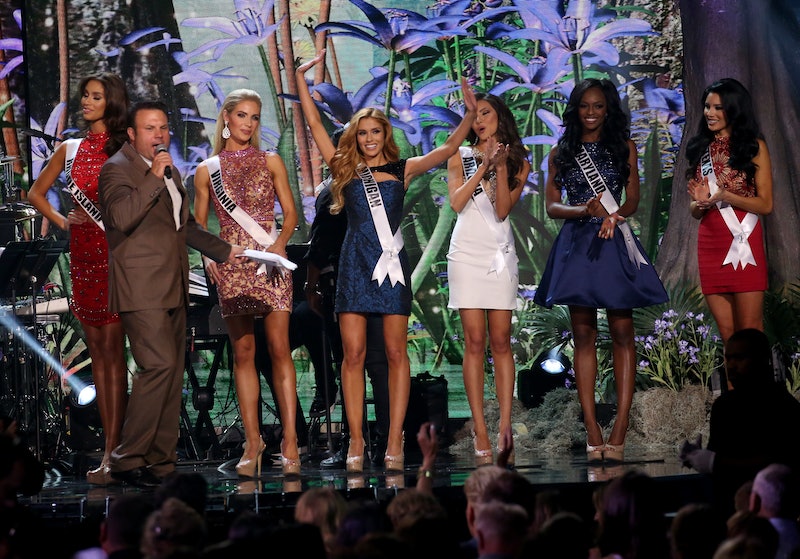 Though Miss Universe has been running for 63 years and offers a platform for a group of talented, beautiful women who each arguably deserve to win, it's always exciting to root for your home team. But how many times has Miss USA won Miss Universe? After all, when you have between 80 and 100 countries sending contestants to compete, said competition will be pretty stiff.

Since 1952, Miss USA has won the title a total of eight times out of the 63, as determined by Miss Universe's Past Winners section on the pageant's website. But while that only sounds like a handful of times, Miss USA is actually leading with the most crowns ever won, with Venezuela clocking in at second with a total of seven wins.

It all started with Miriam Stevenson, the 21-year-old Miss South Carolina who nabbed the title for the U.S. in 1954. According to a leading online resource for international beauty pageants, Global Beauties, since Catalina Swimwear was the biggest sponsor of the pageant, the lightning round that would break the tie between Stevenson and Miss Brazil was who had the "better" figure. According to Global Beauties, since Stevenson had "fitter" hips, she was crowned reigning queen. But feeling that Miss Brazil was a worthy adversary, she actually gifted the car she won in her prize package to Rocha as consolation (solidarity, man).

Only two years later in 1956, the USA took home its second crown with Carol Morris. Representing Iowa and being an accomplished woman who was a decorated swimmer and graduated fourth in her class from Drake University, she beat out 29 other contestants for the gold. Morris went on to use one of the Miss Universe prizes in earnest — a year long movie contract — acting in many films and TV shows.

At 18 years old, Linda Bement nabbed the third crown as Miss Utah in 1960, which also happened to be the first Miss Universe pageant to be televised nationwide. One notable aspect of Bement's win was that she beat out first runner up Daniela Bianchi from Italy, one of the most memorable Bond girls of all time (Tatiana Romanova from From Russia With Love).

Six years later, Sylvia Hitchcock became reigning queen by repping Alabama, though she grew up on a chicken farm in Miami. After winning her title, she tried the romantic dream of being a model in New York City, but disillusioned by the town she instead returned to Miami where she married the inventor of a fruit harvesting machine and worked for a television station.

Shawn Weatherly started off a new decade with a win of the Miss Universe crown for the U.S in 1980, and she went on to star as Jill Riley in the first season of Baywatch and Cadet Karen Adams in the film Police Academy 3: Back In Training, arguably making her one of the most successful American winners to date.

After a 15 year break, our sixth queen was 21-year-old Chelsi Smith of Texas, who took home the title in 1995. She went on to dabble with acting, modeling, and singing, with her biggest break being recording single "Dom Da Da," part of the soundtrack for The Sweetest Thing with Cameron Diaz.

Then Brook Lee from Hawaii carried on the title in 1997. Her grandfather emigrated from Korea to Hawaii in the 1950s, and her ancestry is a mix of Korean, Hawaiian, Chinese, Dutch, Portuguese, English, and French origins. Her win meant that she also nabbed the honor of being the oldest ever queen of the pageant, at the age of 26. She went on to finish her graduate studies in communication and to make several cameos in shows and movies.

As for our last champ, Olivia Culpo, Miss Rhode Island won the crown at age 20 in 2013. Miss USA was the first pageant she ever entered, and she nabbed the title only to take on the next contest with ease. While she seems to slay beauty pageants without even trying, Culpo has more talents than just a winning smile. Having played the cello since the second grade, she's an accomplished cellist who has worked alongside world-renowned musicians like Yo-Yo Ma and performed at Carnegie Hall.

Whether Miss USA wins the 2015 pageant or not, we clearly have a slew of talented women who have represented our country well. Here's wishing everyone good luck tonight while keeping our fingers crossed for the home team, Olivia Jordan.

More like this
Here Are All 703 Outfits Rachel Wore On Friends
By Kat George
Kim Kardashian On The Beauty Hack That “Changed My Life, My Skin, My Confidence”
By Taylor Jean Stephan
Rita Ora’s Sheer Dress & Mermaid-Inspired Prosthetics Stun At British Fashion Awards
By Sophie McEvoy
Raheem Sterling Had To Choose Between His Family & The World Cup
By Bustle UK
Get Even More From Bustle — Sign Up For The Newsletter