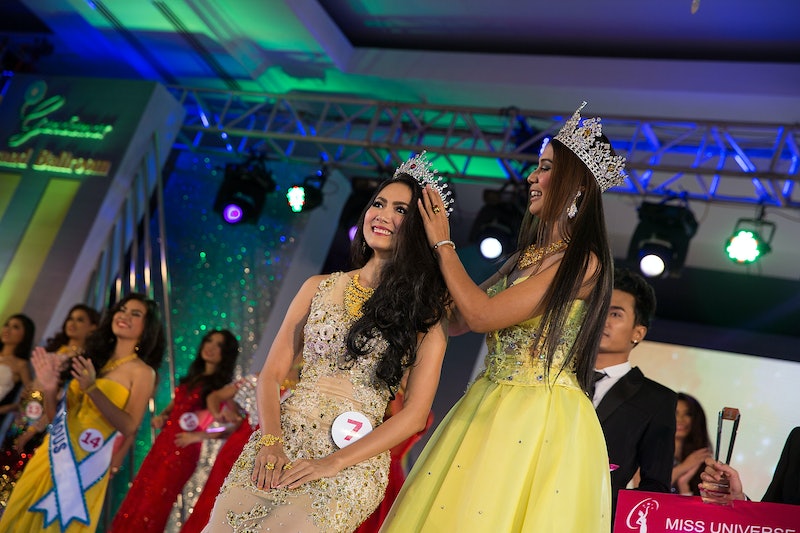 With the Miss Universe 2015 competition airing on the evening of Dec. 20, reflecting on the arguably feminist aspects of the Miss Universe pageant feels like a must for me. If we don't acknowledge that body positivity and feminism can be found even at seemingly sexist events, then how can we stop ourselves from vilifying the women involved? To me, the Miss Universe pageant has always been about so much more than an exploitation of women's bodies and overall aesthetics. Alongside the swimsuit, evening gown, and national costume portions of the event, the question and answer category is an opportunity for the gals to prove to the world that they care about much more than traditional beauty standards.

After winning Miss Universe, the following year contains for the winner a free apartment in New York and a huge cash prize, as well as what's essentially a full time job for Miss Universe through appearances and promotions. And let's not forget that gorgeous crown, obviously. But it's also important to remember that many of the winners go on to do cool things outside of pageantry. Whether through charitable work, entrepreneurship, or success on screen, several Miss Universe women have proven that they're so much more than just a pretty face.

Wendy Fitzwilliam was crowned Miss Universe for Trinidad & Tobago in 1998 as one of the tallest winners in history, standing at a proud 6'0". She currently describes herself as an entrepreneur, philanthropist, mother, and author. Not only has the star published a memoir, Letters To Ailan, but she's also Executive Producer and star of Caribbean's Next Top Model. It's definitely worth catching up on, considering the sad conclusion of Tyra Banks' own America's Next Top Model .

This Australian beauty won Miss Universe in 2004 and hasn't stopped rising in fame since. Also a host of a Top Model spin off, Hawkins has been the face of Australia's Next Top Model since 2013. But outside of her work in television, she has made a big career as a business woman. She is the founder and CEO of successful swimwear line Cozi By Jennifer Hawkins, as well as the spray tan brand Jbronze.

Shawn Weatherly winning Miss Universe for the USA in 1980 led to a pretty successful acting career for the contestant, proving that this title can result in many unique opportunities for the women involved. Most notably, Weatherly was one of the leads in Police Academy 3: Back In Training as well as starring in the first ever series of Baywatch as Jilly Riley.

Amelia Vega's win for the Dominican Republic in 2003 made her the tallest woman to ever win the competition, standing at an amazing 6'1". And her crowning also led to an extremely successful modeling career. This star has been the face for many Cover Girl campaigns since, as well as landing covers on publications such as Cosmopolitan, Glamour , and Harper's Bazaar.

Armi Kuusela was the first ever winner of Miss Universe in 1952, representing Finland. Although she didn't go on to a media-focused career like many of the women since, she did — interestingly enough — give up the title so she could get married and start a family. Prioritizing her personal life over the spotlight was a pretty badass move in my opinion.

Gabriela Isler won the title of Miss Universe for Venezuela in 2013. She has since gone on to become the founder and CEO of the Universe Of Blessings Fund, a charity dedicated to educating young women and girls around the world about "decreasing the rates of adolescent pregnancy and maternal mortality, combating trafficking, and supporting values-based educational programs." Her humanitarian work has even led to a blessing from the Pope after she spoke out against human trafficking.

Lara Dutta won Miss Universe for India in 2000, and the title launched her into a highly successful acting career. She is likely a household name in India these days, despite turning down roles in The Matrix Reloaded and The Matrix Revolution, according to her IMDB trivia page.

When you hear about some of rad things these women are doing, it becomes clear that the role of Miss Universe isn't one to be sneered at. It's often used as the starting point for elevating many women's careers. And that part is definitely a good thing.

More like this
Here Are All 703 Outfits Rachel Wore On Friends
By Kat George
The Best Heels For Bunions, According To A Podiatrist
By Margeaux Baulch Klein and Maria Cassano
Dua Lipa On YSL Beauty, Plus Her Fearless Approach To Hair & Makeup
By Erin Stovall
All The Products Hailey Bieber Used For Her Birthday Makeup Look
By Olivia Rose Ferreiro
Get Even More From Bustle — Sign Up For The Newsletter