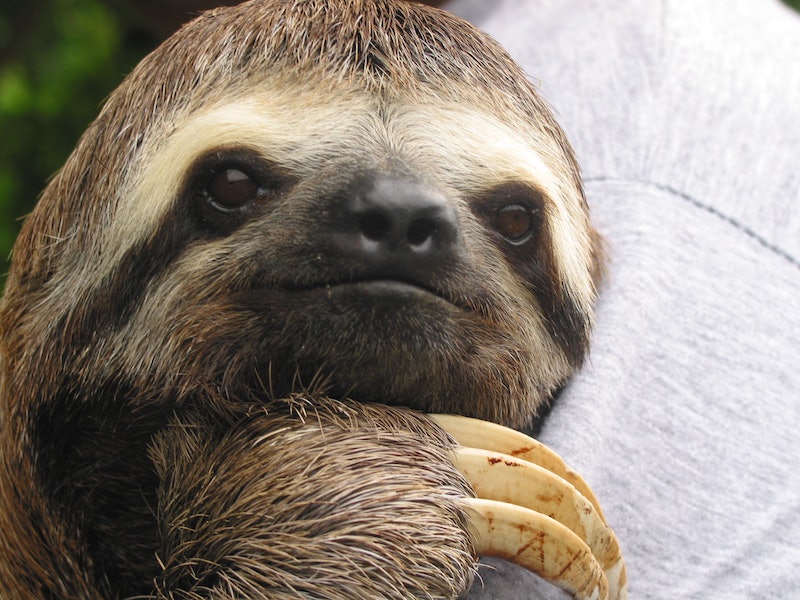 In theory, going viral is every anti-drug campaign's dream, but in practice, the Internet's attention isn't always what it's cracked up to be. Recently, the New South Wales government's "stoner sloth" anti-drug campaign has become intimately familiar with the dark side of going viral after its series of short videos meant to discourage adolescents from marijuana use garnered international attention — but probably not the kind they were looking for.

In an effort to illustrate why smoking marijuana is a Very Bad Thing, the videos depict teenage stoners as terrifyingly gigantic sloths in situations such as school or family dinner, where being an oversized South American mammal isn't ideal. "The campaign is designed to appeal to, and be ‘shareable’ among, teenagers, who are some of the most vulnerable to cannabis use. We know that younger audiences respond more to campaigns highlighting the short-term consequences of their actions," a spokesperson for the NSW Department of Premier and Cabinet told Huffington Post in a statement.

Of course, there are two things the Internet loves almost as much as cats: Watching adults fail to connect with teenagers, and pointing and laughing as ad campaigns crash and burn. Unfortunately for the NSW government, the "stoner sloth" ad campaign combines both of these.

In one video, the teen/sloth hybrid "Jason" flails around and moans at family dinner before accidentally passing his mother the salad, even though she explicitly asked for salt. (Perhaps he was worried about her sodium intake?) In another, "David" flails around and moans at a party rather than making conversation, eventually driving away everyone but his put-upon best friend. In a beautiful example of irony, The Guardian points out that the teen partygoers in this clip are all holding red solo cups, aka the universal symbol of alcohol, implying that drinking is totally fine as long as marijuana doesn't enter the picture.

In a third clip, "Delilah" — you guessed it — flails around and moans as she fails to finish a test, all while her fellow students shake their heads in dismay at her ineptitude. Each video concludes with someone expressing disgust at the teen's actions, condemning them as a "stoner sloth," followed by the tagline, "You're worse on weed."

It sounds like a modern-day adaptation of The Metamorphosis, but apparently, someone in the NSW government meant it in complete seriousness. "The Stoner Sloth public awareness campaign has been designed to encourage positive behaviors in young people before bad habits start, and motivate discontinued use of cannabis before they become dependent," a spokesperson told Mashable.

"Stoner Sloth" so abjectly failed to connect with its audience that Australia's National Cannabis Prevention and Information Centre (NCPIC) released a statement on its website distancing itself from the campaign.

At the NSW Government's request, NCPIC provided an initial basic analysis of other cannabis harms campaigns from Australia and around the world and general recommendations. In this case, those general recommendations were things like being aware that teenagers are intelligent and have access to a lot of information, so campaign approaches should respect them and give them credit by avoiding hyperbole... NCPIC was not advised of or consulted about creative concept — the stoner sloth idea — and learnt of it at the same point as all other Australians when the campaign was released this week, so cannot provide insights into its development.

To put icing on the (cannabis-laced) cake, the campaign shares a name with an online marijuana store, StonerSloth.com. Of course, "Stoner Sloth" is hardly the only failed anti-drug campaign out there, but it's certainly one of the most hilarious. Check out the videos below. They're guaranteed to give you the giggles — no marijuana necessary.