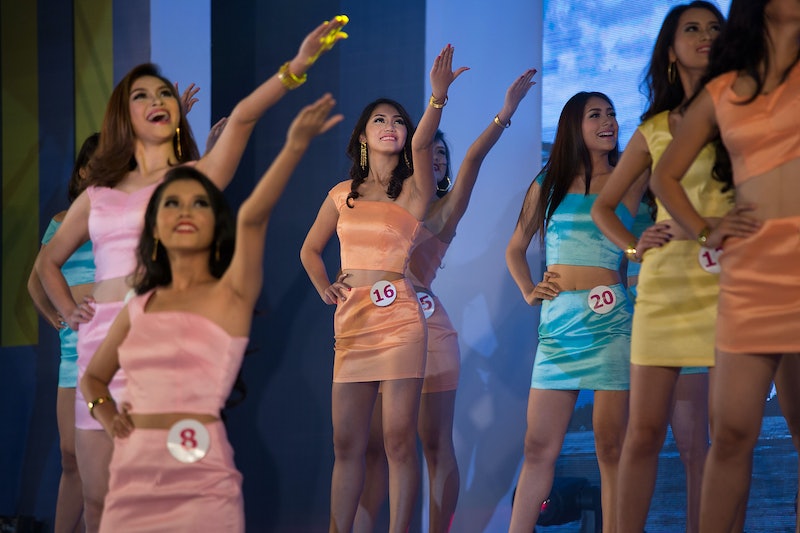 If you've been too busy getting into the holiday spirit to watch TV, you likely didn't realize that the Miss Universe 2015 pageant is airing on the night of Dec. 20. A lot of my fellow feminists out there might be rolling their eyes in disapproval over an organization that arguably perpetuates traditional and stereotypical forms of beauty, but hear me out. There have actually been some feminist Miss Universe moments that stand out throughout the pageant's history, all evocative of some serious girl power. And here's hoping there are many more as we wait for the next Miss Universe to be crowned tonight.

In terms of feminism, many might argue that beauty contests objectify women and feed into inequitable sexualization as a whole. While I understand that premise, and do agree, it's also important to remember that just because the underlying values of an event or organization might be sexist, not all of its moments — and not all of the people involved — necessarily are as well. Plus, something that may have originally been rooted in misogynistic ideologies doesn't have to stay that way. So in that spirit, let's take a look at some of the most feminists moments from Miss Universe, throughout history.

1. When Violence Against Women Was Addressed In The 2014 Question Round

At the 2014 contest, judge Emilio Estefan asked Miss Jamaica Kaci Fennell about the impact of violence against women. “One in three women will experience violence in their lifetime. What can be done to get that number down?” Asking a question like this not only helps bring awareness to an arguably under-served conversation, but also provides contestants with an opportunity to address a real issue that is relevant in their day to day lives.

2. When 2009 Miss Universe Said Men And Women Are Equal

Stefania Fernandez of Venezuela, the 2009 winner, was asked about gender equality during the Final Five Q&A round, to which she responded that she thinks men and women are equal already. "I feel we have reached the level that men are at,” she said. While some might feel that not addressing the gendered disparities that do still exist between men and women was problematic, at least she was open about believing in equality.

3. When Shanna Bukhari Shut Down Haters At Miss Universe GB

A version of Miss Universe that gets a whole lot less media attention is Miss Universe Great Britain, which is held every year in the United Kingdom. In 2011, Bukari was criticized for competing in the pageant, since she was an Asian woman representing Great Britain. Judge Rehna Azim spoke up for her, though, writing on The Guardian about how she was ultimately moved by the pageant and not swayed by the backlash.

You may remember the racist controversy that occurred in 2013, when the first Indian-American woman took home the title of Miss USA. Part of the beauty in her winning the crown was that representation of women of color at Miss Universe began to seem possible.

Paulina Vega of Colombia was the winner of Miss Universe two years ago. She answered judge Rob Dyrdek’s question, “What could women learn from men?” with, "I believe there are still men that do believe in equality. I believe that's what women should learn from men." I think it's important that everyone, of all genders, becomes more in tune with still-relevant issues of gender equality. That is what makes this moment shine.

This all being said, there are a lot of not-so-feminist moments from Miss Universe's past (the swimsuit competition being one of the most questionable segments of the show), so here's hoping for even more feminism to be celebrated at this year's competition.