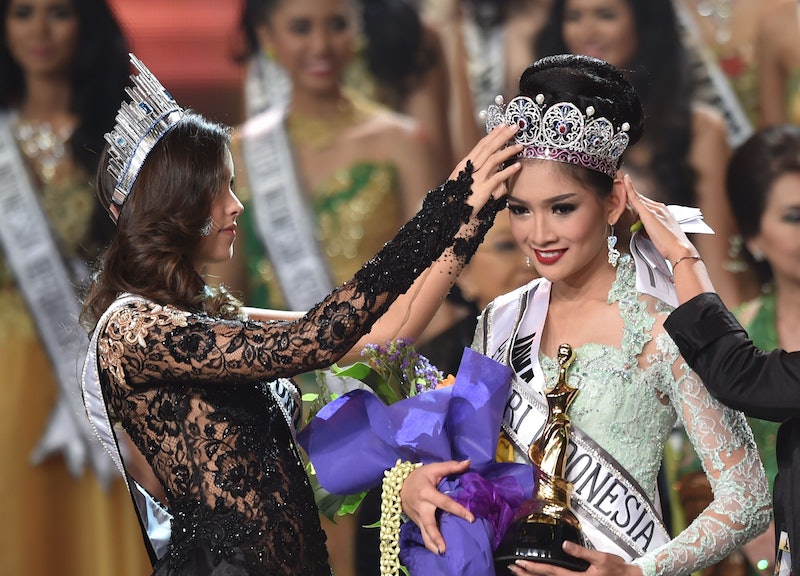 On Dec. 20, 88 contestants from around the world will compete in Miss Universe 2015, but only one of them will get the chance to wear the stunning Miss Universe crown. In past years, the crown has been adorned with diamonds, pearls, and even rubies. However, according to MissUniverse's website, the Diamonds International Incorporation (D.I.C.), one of Miss Universe’s sponsors, created a new crown for the 63rd annual Miss Universe Pageant last year. According to the site, the crown’s design is inspired by the D.I.C.’s Czech roots and the Miss Universe Organization’s home base, New York City. The crown, which is made up of 33 Bohemian crystals, five blue topaz stones, 198 blue sapphires, and 311 diamonds took over 3,000 hours to make and is estimated to cost about $300,000. The pageant professes that the crown symbolizes “the beauty, stability, and confidence of women around the world.”

This year’s crown costs significantly more than the crown before it, which was estimated at $250,000, according to hub for all things pageantry PageantsNews.com. However, it is not the most expensive crown in the history of the Miss Universe pageant. In fact, in 1954 the third Miss Universe crown, also known as “The Star Of The Universe,” cost around $500,000. Although this year's crown may not be the most expensive to grace the Miss Universe stage, I think its unique design and blindingly beautiful gemstones will look lovely on tonight’s lucky winner.

If you can't stop lusting after this year's crown, scroll down to see the eight other toppers that have graced the Miss Universe stage.

In 1953, the crown was changed to a metallic bronze and was worn by the second Miss Universe, Christiane Martel from France.

In 1954, the crown changed yet again to the "Star Of The Universe." This crown consisted solely of pearls and was estimated at a $500,000 value.

Marlene Schmidt of Germany was crowned Miss Universe in 1961 with the 10th Anniversary crown. This one was composed rhinestones and was only used for two years, 1961 and 1962.

From 1963 to 2001, the same crown was used. Dubbed the "Miss" crown, it consisted of rhinestones and featured the Miss Universe Organization's logo at the center: A woman holding a scepter.

In 2008, the tiara was changed to a white and yellow gold combination created by CAO Fine Jewelry, and was estimated to cost about $120,000.

From 2009 to 2014, the crown switched to a diamond and ruby version created by Diamond Nexus Labs, and its estimated worth is a quarter of a million dollars.

In 2014, Miss Universe winner Paulina Vega from Colombia was the first ever to wear the Diamonds International Incorporated crown. This one is composed of diamonds, bohemian crystals, sapphires, and topaz stones, and is said to cost around $300,000.

One thing's for sure: No matter the decade, these babies cost quite the pretty penny.

More like this
M.A.C. Is Launching An ’80s-Chic Stranger Things Makeup Collection
By Olivia Rose Ferreiro
I Tried Marilyn Monroe's Makeup Tricks, & They're Pretty Genius
By Olivia Rose Ferreiro
10 Nail Trends That Perfectly Capture The Early 2000s
By Paris Giles
The Most Extra Party Girl Beauty Looks From The Early 2000s
By Paris Giles
Get Even More From Bustle — Sign Up For The Newsletter