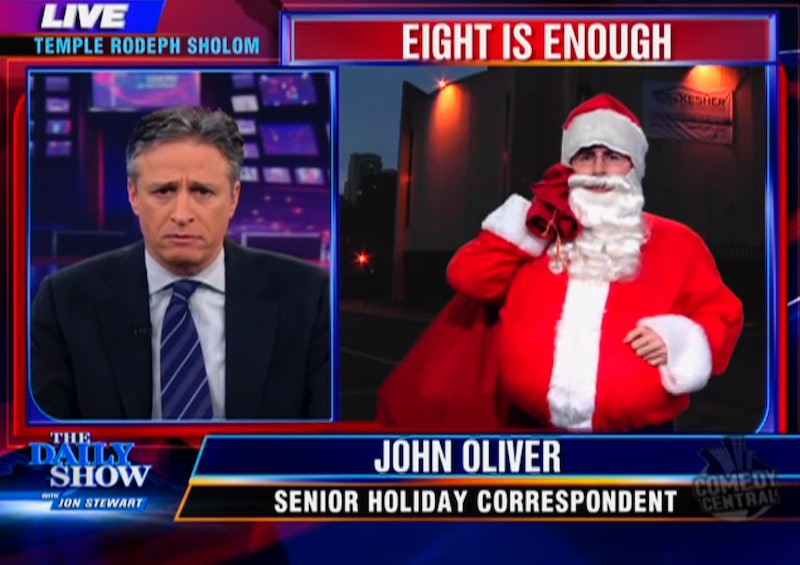 It's been a rough few weeks for Last Week Tonight fans. The HBO show is in the middle of a long winter break, which means such important events as the last two GOP and Democratic debates have yet to be lampooned by one of television's funniest hosts. Luckily, there are plenty of videos available to enjoy over the break that are fresher than sugar cookies coming out of the oven. These eight times John Oliver talked about the holidays should hopefully tide you over before the really hilarious faux journalist returns to his acclaimed show.

Although Oliver has been known to take on such high profile issues as FIFA and net neutrality, there have been plenty of moments where the comedian was dumbfounded by what he was reporting on, like online harassment. He's been known to take on holidays before, and his brilliant takedown of April Fool's Day was incredible. Oliver even got a jab in about Christmas when discussing the inanity of April 1. Oliver said:

We don't need a special holiday to disappoint our loved ones. We do that enough on every other holiday on accident. Okay, Nana, when are you going to yell “Christmas fools” and give me my real present? This Christmas sweater is an abomination.”

His treatment of winter is even better, as you can see from the videos riffing on regifting, the party fouls of New Year's Eve, and that extra second the universe has gifted us for seemingly no apparent reason.

The holidays are a time to show loved ones how much you care by way of presents. Sure, it's nice to see friends and family but Oliver also realizes the downside of catching up with people who may not know you that well. The comedian's guide to regifting is spot-on and even sets a hard limit on the amount of presents you can discard during the season. "Do not attempt to redistribute all of your gifts amongst your friends and family like a festive Ponzi scheme," Oliver warns.

Way back when Oliver was with The Daily Show, he served as senior holiday correspondent in 2009. The comedian took on the many ways he felt that Christmas was better than Hannukah in a hilarious segment that showcases all the over the top rituals of a seriously commercialized holiday.

Oliver may have been passionate about defending Christmas, but a 2013 segment showing The Daily Show's senior political correspondent celebrating Congress passing a budget is far more joyous. Oliver's praise of the two year budget simply oozes Christmas cheer. "Joy to the world. What an amazing, glorious day," Oliver begins and only gets more impassioned from there.

One of the few things I know I can count on during New Year's Eve is a dazzling display of fireworks as the clock strikes midnight and another year has ended. Oliver's original take on those explosions in the sky was released during the most fireworks-centric holiday of all, Independence Day, though it's still relevant whenever the classical music starts playing, the parking scene's a mess, and that pyro guy really needs to get home at the end of the night. Not headed out for the last night of the year? Put on Oliver's recap of every fireworks display ever, and it's like you haven't missed a thing.

Coffee shops around the country put their own spin on the passing of seasons with flavorful offerings available only in the autumn and winter seasons. Oliver may not want you to partake in pumpkin spice in December but baristas will still be serving PSLs up alongside peppermint lattes and gingerbread-tinged coffees. Revel in your love of "eggnog for morning people" and know that at least you're doing your part to consume the American average of five pounds of pumpkins per year.

The last day of the year marks an exhausting end to the stream of holidays dotting December. Oliver's guide to New Year's Eve might just be the only way you can shirk your partying responsibilities and actually chill out when the clock strikes midnight. "Do you really want to sit on a sofa and watch hummus turn brown?" Oliver asks, perfectly summing up the saddest passing of time at a party based on appetizers that people don't even want to eat.

2016 is going to be a seriously special year and not just because the Olympics will return for Last Week Tonight to lampoon. The whole year is technically longer, what with an extra second of time being added to atomic clocks in June due to the fact that the average solar day is now slightly over 24 hours in length. Oliver introduced the world to the leap second and gave people a way to reap the benefits of just a bit more time with one second videos "arguably [a] more important second than the big bang was."

The True Meaning Of Christmas

Judging by this elaborate clip from The Daily Show aimed at teaching host John Stewart the true meaning of Christmas, it's clear that Oliver seriously excels at spreading the joy of holidays. He concludes the segment as a Tiny Tim-esque character ready to go catch a movie and eat Chinese food with Stewart, who doesn't celebrate Christmas.