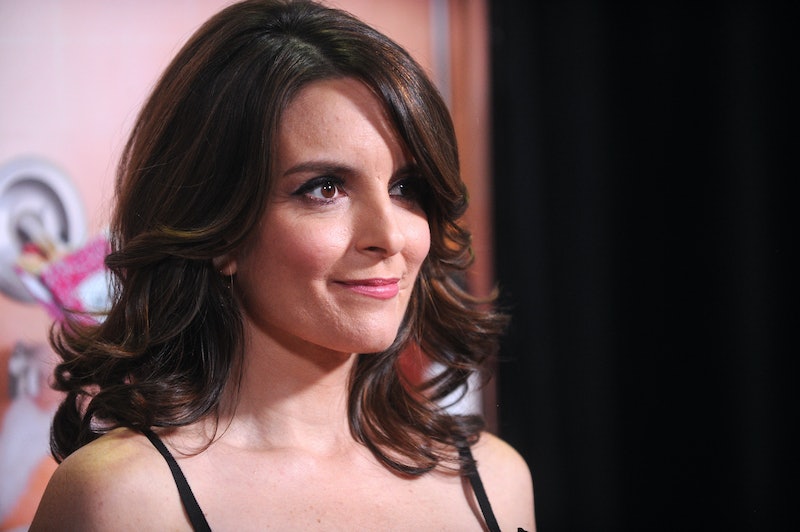 Back in March, I proudly marathon-ed all of Unbreakable Kimmy Schmidt on Netflix in one night. I started with a few episodes and loved it so much that suddenly, I was at Episode 13 — hey, it happens. I adored it all, except for one subplot — the one where New York City socialite Jacqueline Vorhees (Jane Krakowski) is revealed to be Native American. This storyline inspired some controversy from Native American groups, and back in March, I wrote an essay on Bustle all about my discomfort with having the white Krakowski play a Native American. Over the weekend, Unbreakable Kimmy Schmidt co-creator Tina Fey finally addressed the subplot at a Television Critics Association panel, although not to apologize — instead, Fey said that she's not going to explain that joke, or any joke for that matter.

In the hit Netflix series, Kimmy Schmidt (Ellie Kemper) moved to New York City to get away from her past as an "Indiana Mole Woman" who was imprisoned in a bunker by a deluded reverend for decades. Jacqueline, Kimmy's boss, has her own parallel storyline that begins in Episode 3, in which she's revealed to be Jackie Lynn, a Native American from Bear Creek, South Dakota, who refuses to embrace her own heritage. As said, that storyline garnered substantial negative feedback, as Fey explained at the panel: "Steer clear of the internet and you’ll live forever. We did an Unbreakable Kimmy Schmidt episode and the internet was in a whirlwind, calling it 'racist.'"

Still, Fey added that her "new goal is not to explain jokes," saying, "I feel like we put so much effort into writing and crafting everything, they need to speak for themselves. There’s a real culture of demanding apologies, and I’m opting out of that." And you know what? She's right. Although I didn't love the storyline, I'm glad to hear Fey opt out of explaining that joke, or any joke. If it's meant to be a multi-layered, multi-episode plotline, then let it be a laugh for those who see it that way. If some folks see it as a plot point to make the icy Jacqueline a more well-rounded character, then that's fine. And if you thought it was the worst thing in the world? I'm not sure an explanation from Fey will really change your opinion.

There's nothing that makes a joke less funny than someone sitting there and explaining why it's funny or why it matters — it doesn't make the joke or the teller any funnier, and it doesn't necessarily add anything to the argument about it. For instance, Kimmy co-creator Robert Carlock did try to explain the subplot a little bit, and, while I'm glad to have a bit more context, it doesn't change much how I feel about its existence. "We have a couple of writers on staff with Native American heritage," he said back in March at the Television Critics Association press tour. "So we felt like we had a little room to go in that direction...wouldn’t that be a crazy A-to-Z for her to deal with that, and maybe reconcile with it, and re-embrace who she really is, ultimately."

So how about we let Jacqueline and Jackie Lynn be for now and look forward to Kimmy Schmidt Season 2? After all, the reason why viewers love Unbreakable Kimmy Schmidt so much is because it's not afraid to take chances — not every joke may land with everyone, but that's OK. The point of comedy isn't to appease every single viewer, but to stretch boundaries and start conversations, as Kimmy Schmidt undoubtedly does.