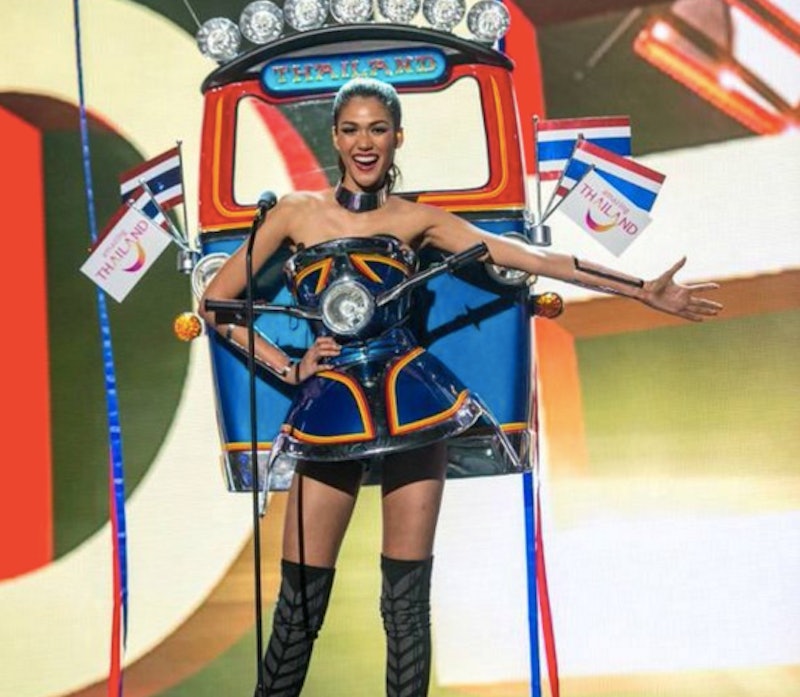 There are two times in the year when costumes take it to the next level: Halloween, of course, and the Miss Universe pageant. And this year, Miss Universe Thailand won best national costume at Miss Universe 2015 via fan votes for a look that was not only incredibly cute and modern, but actually super trendy. At its bare bones, I would totally wear the foundation for a night out.

Miss Universe Thailand, Aniporn Chalermburanawong, went with a "tuk-tuk" costume, rocking a strapless mini dress with handlebars. Hanging behind her was the front of a tuk-tuk, a common automobile in the streets of Thailand, complete with flags, lights, and streamers. And I've got to say, it was a pretty accurate representation! Personally, I loved how colorful the whole look was.

But aside from the tuk-tuk itself, Miss Universe Thailand added to her outfit a large, metallic choker, statement bracelets on each arm, super stylish boots, and over the knee socks. Though costume-y, it was still pretty ready-to-wear. It's no surprise that it was the fan favorite, appealing to the people that love the trendiness of the whole look. To take things even further, Chalermburanawong rocked a high, slicked back pony and a red lip. Trés chic!

And though there were dozens of gorgeous national costumes on stage, this one felt the most refreshing and up-to-date. Congrats to Miss Universe Thailand, for piling up all those votes.

And, of course, people on Twitter are loving this look too.=

Some are even comparing this national costume to Thierry Mugler's designs from the '90s.

I totally see that comparison, which basically goes to show how trendy and fun this ensemble is. And though there were gorgeous looks all around, the quirky, unique feel of this one pretty much took the cake for me (and for everyone else, apparently). Any chance I could borrow this look for my next night out? I'm being 100 percent serious.