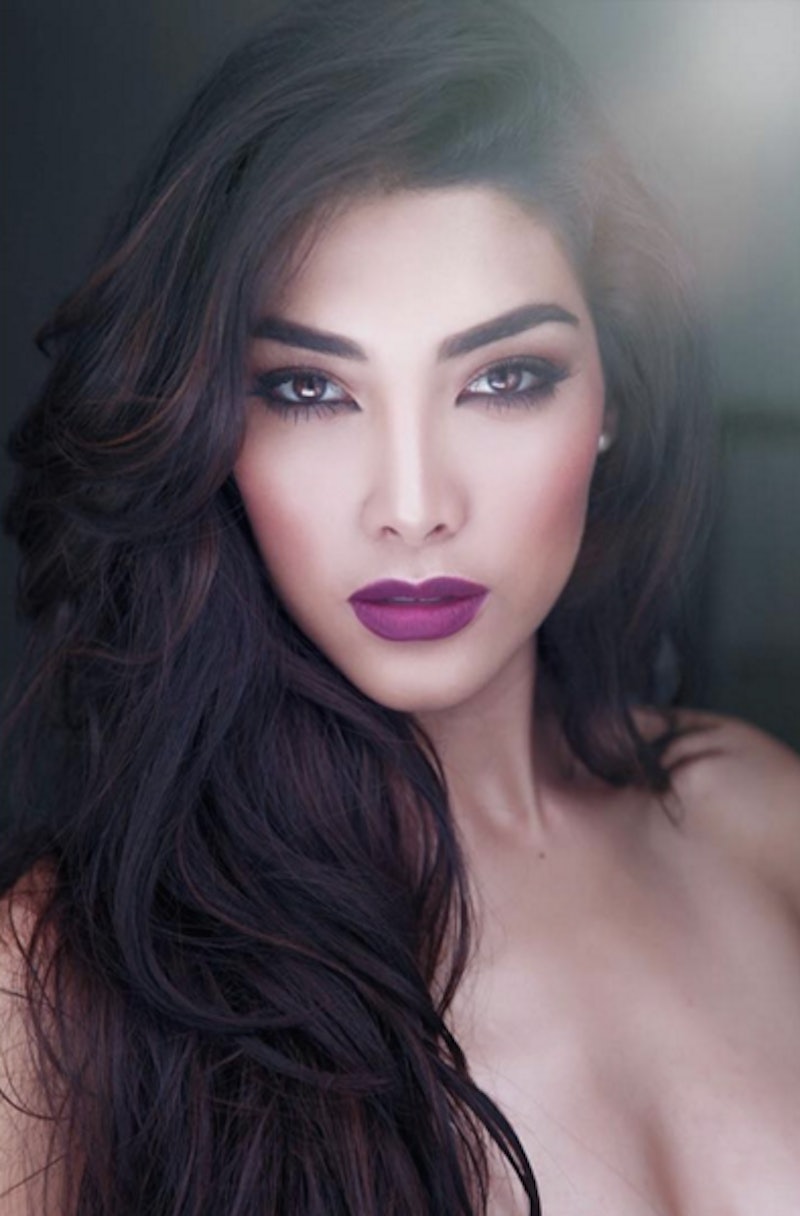 As someone who regularly self-identifies as a body positive feminist, beauty pageants such as Miss Universe 2015 can throw me into pure emotional calamity. I want to support women and the choices they make for themselves, but ideally not by supporting an industry built off perpetuating traditional and stereotypical standards of beauty.

Due to the latter issue, pageantry can come with its fair share of stereotyping of the contestants themselves: Women who must place so much value on the aesthetic — on maintaining "beauty" as it would be defined by social constructs — that they're perfectly happy to strut on a stage in their bikinis, being ranked based on how "good" or "bad" they look doing so by a panel of judges (which often includes dudes).

But at the end of the day, the questionable politics of beauty pageants don't necessarily have to align perfectly with the politics of the women involved. On this, Wendy Esparza, Miss Mexico 2015, has a little something to say.

"Sometimes people might not take me seriously or assume that I place an important value on physical appearance, which isn't true at all," Esparza tells me in a phone conversation. "I think it’s the title holder’s responsibility to demonstrate the contrary. Any pageant should seek to find an intelligent woman that can speak well, that has initiative, that is hard working."

Though a native of Evanston, Illinois, Esparza has grown up between the United States and Mexico, the daughter of immigrant parents. She attended Loyola University with a full ride, where she studied journalism and Latin American literature. But she's no stranger to the arguably cliched idea that those interested in beauty pageants mustn't also be interested in, well, anything else.

It's been difficult for the 24-year-old to reconcile a relatively new interest in pageantry with her goals and interests outside of all the glitz, glam, and high heels. "Since I have a journalism degree, it’s hard to balance my degree and this side of my personality," she tells me. And it makes sense. I mean, when you're an educated person who seemingly believes in feminist principals at heart, it must be trying to balance such beliefs with a passion for an environment that many might call anti-feminist. To such an argument, Emily Vrotsos wrote on Feminspire, "The problem is not the women who compete in them, the problem is how beauty pageants evaluate these women’s worth: physical beauty."

Most folks who believe in body positivity and feminism also believe that beauty is undefinable. Contrary to everything the media — and beauty pageant casting directors — might try to tell us, beauty isn't a formula. To be physically "beautiful" isn't only to be thin, fair-skinned, tall, made-up with a couple of layers of foundation, and topped with long, flowing locks. But more importantly, to be physically beautiful, as defined by the mainstream, just shouldn't necessarily be the be all and end all for feeling accepted and worthy in this world. Like Esparza tells me, "I define beauty as kindness. I’ve met many people who are physically beautiful, but once they demonstrate a bad attitude, that disappears."

The reality is that Miss Mexico isn't only interested in being "beautiful." She's a huge fan of Breaking Bad, deeming her favorite character Walter White because "he’s so intriguing and he’s so intelligent." She's a devotee of coconut oil, even in cooking. In a way, she even believes in holistic health, telling me, "I think it is important to take care of yourself — your body, your mind — and really show young girls that are looking up to us and seeing these images that may seem perfect that we also have imperfections."

Esparza is also interested in her heritage. After graduating from Loyola, she moved to her hometown of Aguascalientes in Mexico, where she worked at a local news station. Visibility for Latina women, and all minority women for that matter, in the media is something she places intrinsic value on. "The U.S. is such a mosaic of cultures, and we need to see that in our media," she tells me. "It’s so important to represent that rainbow of women."

Although Esparza has experienced living as a Latina in America during a time when there is still a very clear race problem in the country, she muses that she's always felt rather accepted here. "My parents were immigrants, and I studied in Loyola, which is very diverse in terms of political and racial backgrounds. I’ve been very lucky in that sense, because I didn’t grow up with hatred and discrimination," she tells me. But this doesn't mean she's naive or unwilling to recognize that there does exist a race problem. "The country is going through a lot of tension right now and a lot of hatred. And it’s sad. It’s very disappointing to turn on the TV and see so many problems. But I think we need to respect each other's differences, and recognize that it's OK to have different political views."

It's this celebration of differences that makes her want to pursue a career in journalism. "I love investigative journalism and stories that are inspiring. I'd love to find people or organizations that are struggling and help give them a voice," she says. "That’s the connection I’ve made with my career and Miss Universe. It’s a platform, and I can use it as a microphone to elevate thoughts, ideas, and initiatives."

While it's clear that Esparza's interests lie in things far beyond pageantry (heck, she wasn't even interested in beauty pageants until moving to Aguascalientes after college, where she entered a pageant in order to "connect with that part of my identity" that she felt she missed out on by being in the U.S. for so long), I do believe one must still look at pageantry with a critical eye. As Bustle's Kara McGrath recently noted, "Even as we start to see a bit more racial diversity in the competitions — nine women of color competed in the 2015 Miss USA pageant and there are contestants from 85 countries in Miss Universe 2015 — women who fit traditional beauty standards are still the only ones front and center." All it really takes to see the similarities in these women's body types is to take a peek at some of the official bikini photos from this year's competition.

So when Esparza tells me, "I personally don’t have a model body. I have curves and I have boobs and I have thighs," or, "If there's one thing I've learned being in Miss Universe so far, it's how different women are. We all have different bodies, and curves in different places. We're all so unique and distinct," I cannot help but cringe a bit. Of course, the women competing hail from 85 different countries, so there are bound to be differences in shapes and weight distribution and skin color. But we've never seen a plus size contestant in pageantry. Hell, we've never even seen a contestant who visibly appears larger than a size 8.

When asked whether she believes pageants such as Miss Universe will ever grow to become more inclusive, Esparza says simply, "I hope so," later adding that "you have to remind yourself that beauty is not conventional. Beauty is not one size. One color. One hair type." But until Miss Universe and other pageants have a goal outside of helping "every woman have the confidence to stand up in any situation and declare, 'I am secure and that's what makes me beautiful,'" it's still easy to feel like the pageants themselves place far too much importance on beauty as defined by social constructs.

Along the way to better things, I think it's important to remember that the contestants themselves aren't the ones who've made the rules. We mustn't shame women who choose to partake in traditional interpretations of beauty, when that's precisely what we've been conditioned to believe we should be doing. We can only hope that the contestants expand their own definitions of beauty and diversity as the pageant world at large does the same. And we can trust that many of the women involved are choosing to be involved for themselves above all else.

Like Esparza tweeted, "A woman who doesn't need validation from anyone is the most feared individual on the planet." Some might argue that participating in a beauty pageant is a ticket to validation from the masses. And maybe for some that's true. But for others, perhaps it's a way of reconciling an interest in beauty with an interest in a hell of a lot of other cool stuff. All the while refusing to apologize for those multifaceted preferences.

More like this
Here Are All 703 Outfits Rachel Wore On Friends
By Kat George
Here’s Your Daily Horoscope For December 2, 2022
By Mecca Woods
Everything To Know About 'Firefly Lane' Season 2 Part 2
By Gretchen Smail
15 Dreamy Perfume Gift Sets For Every Fragrance Lover On Your List
By Shea Simmons and Olivia Rose Ferreiro
Get Even More From Bustle — Sign Up For The Newsletter