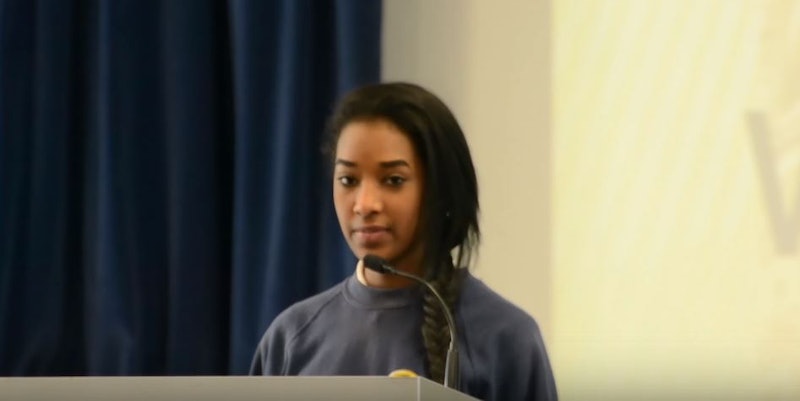 In the wake of the November attack in Paris, Islamophobic sentiment has seen drastic increase all over the world. This prejudice against Islam and Muslim people affects hundreds of thousands of Muslims worldwide, and in a presentation at her school, Isra Mohammed, a 15-year-old student at Kenton School in Newcastle in England gave a powerful and eloquent speech about Islamophobia anti-Muslim sentiment, stereotypes, and prejudices she and many Muslims across the Western world deal with everyday.

Mohammed started her presentation with an image of the Ku Klux Klan with a caption that read, "No one thinks that these people are representative of Christians." Under this image was another, this time of an extremist Muslim terrorist group, with a caption which read, "So why do many think these people are representative of Muslims?" Her speech covered a few different points, from inaccurate representations and stereotypes about Muslims in the media, to the actual values taught by Islam, to her personal experiences with being labeled a terrorist and watching her younger siblings get bullied due to religion.

Mohammed is not alone in dealing with Islamophobia and anti-Muslim bigotry. According to the Huffington Post, there have been 73 Islamophobic attacks and hate-crimes since the Paris attack, and that number only accounts for the reported ones and only covers North America. Think Progress also nostes that Muslims are developing mental health disorders at higher rates, the cause of which might be due to suffering from microagressions geared towards them daily.

Perhaps the most salient point Mohammed made was about ISIS. She discussed how it was misguided to call ISIS terrorists Muslims because, though they might call themselves Muslims, their actions and beliefs are far from the teachings of peace and love promoted by Islam. She also noted that widespread anti-Muslim sentiment, hate crimes towards Muslims, and refusal to accept refugees only fueled the fire ISIS has set, and is likely to create ISIS recruits out of those who have been marginalized.

Here are four things to know about Islam and Islamophobia as taught by Mohammed's speech. Scroll down to watch the full video.

In one of her opening slides, Mohammed mentions that a simple Internet search can yield some hateful results like the ones shown above. I even tried this out myself — when I went into the Google search bar and typed in "Islam is" the first suggested search I got was "Islam is the problem" followed by "Islam is a cult." When I typed in "Muslims are" my results showed "evil, terrorists, pigs, stupid" and "murders."

2. One of the Fundamental Pillars of Islam Is charity

Islam is all about giving back, and one of the core pillars of the religion is zakah, meaning "charity." Contrary to what Islamophobic sentiment would have you think, togetherness, unity, and giving back are key points in the religion. Even smiling at a stranger is built into the five pillars of Islam — as Mohammed mentions, it's considered to be a form of charity.

Bigotry can be easily sensationalized and sensationalism and fear-mongering sell. Mohammed encourages students to be alert readers and critical thinkers and not fall into media traps filled with misinformation.

4. Muslims, Too, Are Terrorized by ISIS

Mohammed mentions that most of ISIS' victims are actually Muslims. Syrians, for example, are trying to get refugee visas to other countries to save themselves from the same terrorists that attacked Paris.

Listen to Mohammed's entire speech below and prepare to get educated by an awesome teenager.