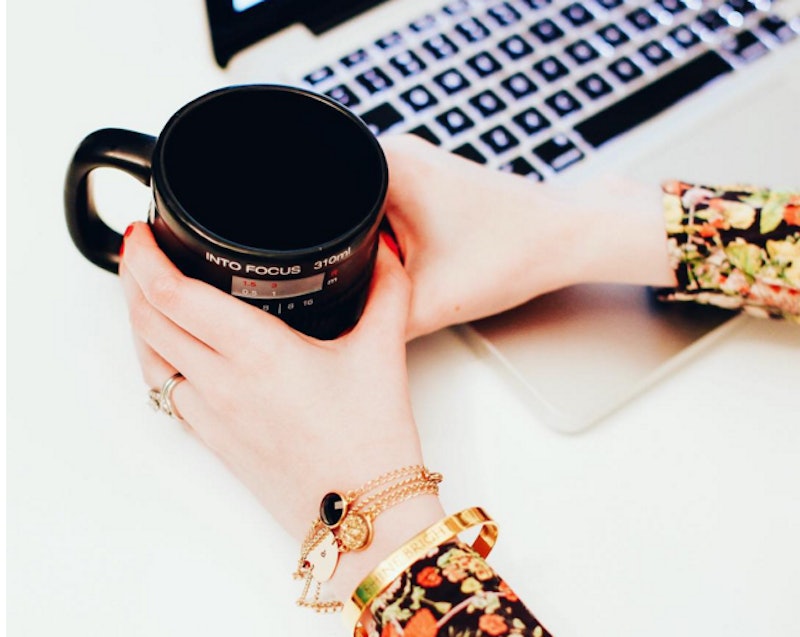 When someone takes time to help you reach a goal, help you look your best in front of the ol' boss, or just takes a moment to go out of their way to make your day better, it's important to show your gratitude at work. But how do you go about doing that without looking cheesy or, even worse, a brown noser? Office politics are a delicate house of cards, and you don't want sincere thanks to get mistaken for something selfish. Or worse yet, you don't want to embarrass someone with a flashy show of appreciation, or snub them with a canned "thanks" that feels like it was tossed over the shoulder.

See? It's a delicate tight rope you have to walk.

It's easy to show our loved ones and friends that we appreciate them (think bear hugs and rounds of drinks or cupcakes on us,) but it becomes a little more tricky when you want to show that same type of gratitude to people that we work with. Below are seven tactful ways to show gratitude at work without coming off as cheesy or fake, because it's important to give thanks where it's due.

First thing's first: Never say thank you with an email. Those have a tendency to sound canned and template-y, so instead walk right up to her desk and tell her. Be genuine and direct, but most importantly tell her exactly why you're grateful. Be specific and blunt. Tell her what it meant to you to have her help of confidence on your side.

Katie Douthwaite Wolf, editor for career-development site The Muse, advised "Face-to-face, specific, and full of appreciation — it’s a thank you that anyone would want to hear." Sometimes no frills and blunt "you rock" is the best way.

2. Make Sure It Doesn't Look Like You Have An Ulterior Motive

Sometimes people thank others in a humble-brag kind of way, letting others know of their own accomplishments by disguising it in public gratitude. It's like your project manager telling your boss how he worked till the eleventh hour and really wanted to thank you for making the copies. Ugh.

Harvey Deutschendorf, an emotional intelligence expert, speaker, and contributor to entrepreneur site Fast Company, further elaborated, "I once had a manager that had a habit of waiting until a meeting where his superior was present before giving out recognition gifts. Instead of feeling recognized, we all felt we were being used by him to gain favor with his boss." Don't be that guy. Find a time to thank them where it doesn't look opportunistic or like you're show boating. That way it'll come across as genuine and not like a strategic move.

3. Mention Them Casually In A Group Setting

You know those times you hear a co-worker singing your praises to your boss, or when your supervisor thanks you for a job well done during a meeting? It feels so nice being appreciated, and even nicer that the person thanking you wants the whole team to know you're essential to the group. If you want to show gratitude to someone at work, try highlighting how lucky you feel to have them part of the project or operation.

Wolf offered, "It doesn’t have to be big and flashy. Try working it in naturally, like as part of a project update that you were going to give anyway: 'The project is right on track, thanks to Joe, who reviewed it and helped me adjust the intro and conclusion — and I think it really hits the nail on the head now.'" The praise will feel natural, and they'll feel not only appreciated by you, but the whole office.

4. Tailor It To The Person You're Thanking

If you want to be genuine with your gratitude, take a moment to think about which way that person would be most comfortable thanked. For example, if it's a quiet, to-her-self type of co-worker that saved your butt on a deadline, maybe calling her out in the middle of a big meeting wouldn't be the best way. But if it's someone that's been trying really hard to catch the boss's eye in order to gun for that promotion, they'd feel delighted that you took the time to highlight their extra effort to the team.

Deutschendorf pointed out, "Some people are shy and even feel embarrassed to be called out in front of their peers or a group. Know the individual (or ask fellow colleagues that know them best, if you are not sure) and give some thought as to the best way to recognize them." Never use canned praise — if you want to come across as genuine, you have to be genuine.

Not every favor or act of kindness a colleague does deserves a parade, but when you want to show them you appreciate all they've done, a small treat can do just the treat. There's nothing that says "appreciation" like a cupcake especially bought for someone during lunch time.

Wolf reflected, "I don’t know anyone who doesn’t appreciate a donut or a cup of coffee that’s not from the lukewarm pot that’s been sitting idly on the break room counter for the past two hours." Show them your thanks with your own act of kindness.

Sometimes all it takes to express your gratitude properly is to show you understand what their help has done for the project or your position in the company. When thanking a colleague, be specific why their decision to help was important to you. Showing that you understand they were a huge part of your success will give them the fuzzies.

Lisa Evans, lifestyle journalist at Entrepreneur, explained, "Saying, 'Thank you for working on the weekend,' for example, recognizes the action of the individual, but adding, 'You really helped us meet this tight deadline,' is even more powerful because it highlights the reason the action was important." When people do you a favor or go out of their way to help, they know exactly what they're contributing. When you show you know too, well, they'll feel good and appreciated.

If you have someone that's always helping you out or quick to do a favor, showering them with thanks and love can feel like overkill. For moments like those, a quick but heartfelt thank you will do. But how do you express it in a thoughtful, non-canned way? Let's go all millennial with this one and say you use a GIF. Eli Epstein from Mashable suggested, "Animated GIFs are clever and unique ways to use technology to say thanks, and it doesn't take Steve Jobs to make them. If you have someone in mind, you can seamlessly create a GIF for (or of) them by uploading an image or video (either from your own device or Facebook) to Makeagif.com." By taking an extra step to personalize your appreciation or make them laugh, it'll feel genuine and memorable.

Showing your appreciation at work is an important tool to help strengthen relationships and to create a tribe that wants to help you (and keep helping you) succeed. Use these simple, non-cheesy tips and your whole office will be glowing with appreciated love and good vibes.