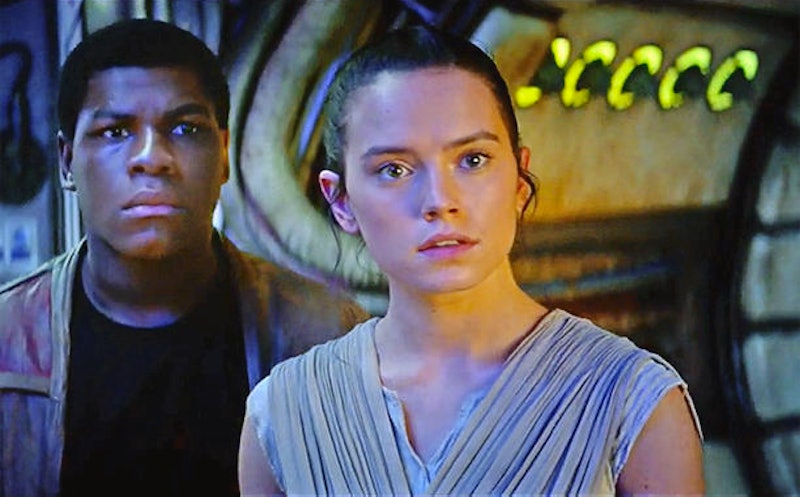 While watching Star Wars: The Force Awakens, the romantic in all of us might have had something niggling in the back of their minds: are Finn and Rey a couple in the Force Awakens ? Sure, it wasn't the main focus of the film, but who could forget the romance that was Han Solo and Leia in the classic Star Wars movies? Their subtle flirting, and Leia's kiss with her own brother (ew.. but totally not her fault) to basically make Han jealous, was ah-mazing. So, can we expect a new love story in the new Star Wars films? Well, at this point I'm not exactly sure. And this is coming after I've already seen the movie.

Because here's the thing: as much as the two new franchise leads, Rey and Finn, seemed to have flirted with one another, in the end, we couldn't tell if it would ever seriously evolve into something else. With Finn leaving us in an unconscious state and Rey gearing up for her own adventure, it's hard to tell when their paths might cross again (although, they undoubtedly will). But, with her pulling away from him holding her hand, his cheesy lines, and the insistence that Rey is strong female character that clearly doesn't need a man, it's hard to tell if Finn looking out for Rey really will actually lead to her falling in love with him after all. These two might just end up being nothing more than friends, and there's nothing wrong with that.

However, there is also definitely still a new hope that arises from all we've seen so far in this next chapter of Star Wars. For example, so far the story just includes those two. As of right now, a love triangle hasn't exactly come into play, thankfully. There is always the chance that a close friendship can turn into something more as time goes on (especially in a Star Wars movie), and, personally, I do think these two could end up being absolutely adorable together. (And maybe end up being Jedis that fight alongside one another? How cool would that be?).

In fact, the concept of a love story was even brought up while the cast visited The Ellen DeGeneres Show as they continued their promotional tour for the film. DeGeneres wasn't afraid to ask the new starlets if there was a love story in the film, and the most telling response we seemed to get? Daisy Ridley's very vague, yet alluring, "we shall see." Watch the interview here:

But from here on out, we'll just have to, well, wait and see. Star Wars: Episode VIII is expected to continue the world's biggest franchise come 2017.