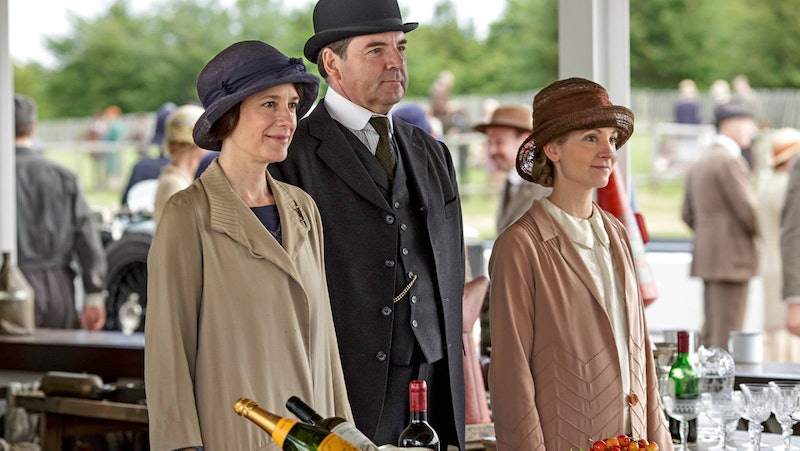 When the sixth and final season of Downton Abbey premieres on Jan. 3 in the U.S., marking the bittersweet end of an era, I know I won’t be the only one sobbing for months afterward. What could have been a totally boring period piece about a stuffy family out in the county of York, is instead a lively and spirited drama. Downton Abbey has carved out a special place in TV history for making American viewers wholeheartedly care about fictional British aristocrats. However, it's not just audiences that love Downton Abbey, as its been praised within the worlds of fellow TV shows too.

Downton Abbey has permeated the cultural zeitgeist, inspiring a host of fan fiction, fan discussions, and plain old fanaticism. There are Downton- inspired lines of tea, jewelry, makeup, and board games, as well as tote bags and apparel bearing what is perhaps the Dowager Countess’s most quotable line: “What IS a weekend?” Other TV shows have taken note of the phenomenon, some mockingly, but there are still those with reverence for the addictive and occasionally soapy drama. In honor of the quickly approaching end of Downton Abbey, here’s a look back at how TV shows across a spectrum of genres have best paid homage to the series over the years.

In “Fundraiser” from Season 8, the whole Dunder Mifflin gang is at a fundraiser sponsored by Angela’s husband, Robert Lipton, the (State) Senator. Oscar returns, shaken, to a table where Jim and Pam are seated and tells them that Senator Lipton hit on him. When Jim suggests that the Senator was simply schmoozing, Oscar reenacts the look that the Senator gave him, prompting Pam to respond, “Whoa!” Jim replies, “OK guys, not every glance means something, alright? Life isn’t Downton Abbey” to which Pam says, “Life IS Downton Abbey.” And she’s right. It is.

Downton Abbey is something of a recurring reference on The Mindy Project. In the series pilot, Dr. Mindy Lahiri makes a speech at her ex’s wedding, pointing out how he hates talking about TV shows he hasn’t seen yet. “God forbid you give away the ending to Downton Abbey,” she says sarcastically. Shortly after, Danny mutters, “What the hell is this show, and why does everybody keep talking about it?” Oh, Danny, if only you knew.

In the episode, “Santa Fe,” Mindy’s ex, Josh, and his rehab visitor, Clay Matthews, recap the latest episode of Downton Abbey: “So Matthew Crawley? He’s like gone.” “Crawley?... Dammit… What’s going on with Lady Sybil?” The pair would hardly seem like Downton fans, and that’s part of the hilarity, but the mention also illustrates how the Crawley family can attract even the most unlikely audiences. And more recently, in the episode “Mindy Lahiri Is a Racist” of Season 2, Tamra says that Mindy “can be condescending to people under you at work. Sometimes you get a little Downton Abbey.” “You’ve seen Downton Abbey?” Mindy asks. Of course she has!

3. How I Met Your Mother

A Downton Abbey-like show figures prominently into “The Fortress” episode of How I Met Your Mother’s eighth season and perfectly illustrates how many rabid fans feel about Downton. In the episode, Ted, Lily, and Marshall get addicted to Woodworthy Manor, which, as future Ted puts it, “was a show about an upper-class English estate at the beginning of the 20th century.” Ted tries to convince Marshall to watch an episode with him, but Marshall refuses because it’s his and Lily’s show. After Lily flakes on their plans, however, Marshall agrees to watch the show with Ted, effectively “cheating” on Lily. She finds out, of course, when Marshall reveals the latest twist. Near the end of the episode, the gang all gathers to watch an episode, but Barney and Robin think it sounds boring. “Kind of boring?" Ted asks. "Grab a seat guys, but trust me, you're only gonna need the edge.” Truth.

Although it’s just a passing reference, in the “Pontiac Bandit” episode of Brooklyn Nine-Nine , Captain Holt describes how Gina live tweets everything, which ruined Downton Abbey for him. It’s easily done — fans who stalk Twitter for updates but want to watch the events unfold along with the rest of the U.S. audience have to unfollow or mute the related accounts temporarily while the show airs first overseas. They can instead follow @voiceofdownton for spoiler-free updates in the interim. Unfortunately, I learned that the hard way.

Downton Abbey makes the Crawley family seem as relatable to a contemporary audience as it can, so it makes perfect sense that Modern Family routinely references the hit show. In the “Disneyland” episode of Season 3, Mitch tells Cam, “It’s Toontown, not Toonton. You’ve been watching too much PBS.” Cam, a man of such refined taste, would of course love the show, and he makes a later callout to Downton Abbey’s cutest guy — The Duke, according to him. Similarly, Manny in “Rash Decisions” tells Jay he needed a nap because he was so tired after the marathon. “The Downton Abbey marathon?” Jay asks. “That family is exhausting!” Manny answers. Truly they are, but real fans can never get enough.

Jimmy Fallon may not be a fictional character, but he’s a major TV personality. Taking note of the crazy popularity of Downton, he made a spoof called Downton Sixbey, in which he plays the Earl of Downton Sixbey, who is also, weirdly enough, the host of a late-night talk show. The downstairs servants in this reimagining are the show’s writers, and the Sixbey family are hilarious extremes of their Crawley counterparts. If the very existence of this on-point parody doesn’t demonstrate obsession, I don’t know what does.

At least Downton Abbey fans can take solace in the fact that when the series ends, our favorite TV characters will be mourning alongside us.