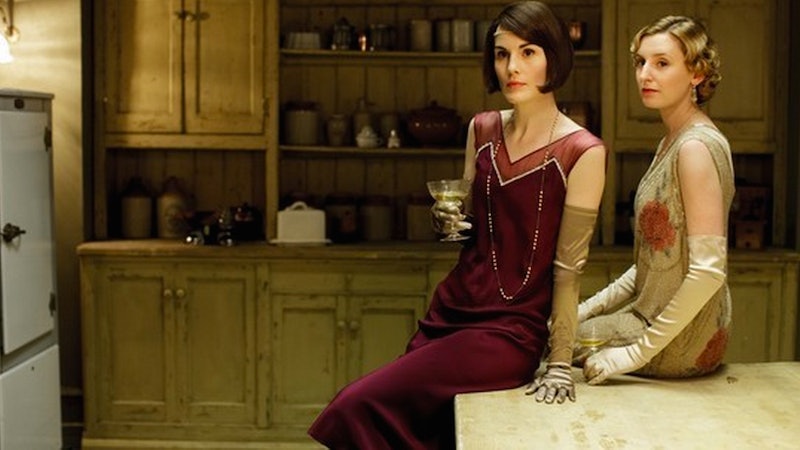 With so many changes occurring even before Downton Abbey Season 6 premieres Sunday night in the UK on ITV and in January in America on PBS Masterpiece, how can we know for sure what's to come for this final season of the historic series? What we can guess with certainty is that the final season will provide the same level of entertainment, passion, and beautiful character conflict and development that Downton Abbey has always provided— those factors that have made the series a critical and awards darling. Once again Downton Abbey has received numerous Emmy nominations including Outstanding Drama Series, Supporting Actor for Jim Carter (Carson), and Supporting Actress for Joanne Froggatt (Anna, of course). With the series dependable consistency in mind, what might Downton Abbey Season 6 look like?

It's always best to look to history for this series, since we know in which years the final season will take place, but when it comes to what will happen with the personal lives of the characters, imagination and past conflicts are always the best places to look for inspiration. Downton Abbey Season 6 will take place around 1925 and potentially a few years after, according to EW, so it's probable that we'll be seeing some big changes to the household thanks to that time period. But from the trailers that ITV has released, we could be in for a major change as the series ends.

1. Is Downton Closing Its Doors?

Considering how many financial issues the estate always seems to have and the fact that Lord Grantham refuses to acknowledge how any kind of change could actually help save Downton, it's about time to properly predict (based on the Season 6 trailers) that the Crawleys will be leaving Downton. My guess is that they will have to sell off all their assets to stay afloat, including Downton, and move away to start over. Perhaps Mary will make the final decision when her father realizes this dire situation is his fault.

2. The Countess & Isobel Are At Odds Again, But Who Will Win?

It's a little tiring to see Downton rehash old storylines including Anna and Bates drama and tension between Violet and Isobel. But the new conflict between Violet and Isobel regarding the hospital seems to be a true dilemma and anger-inducing topic for Isobel. She has poured her hardest efforts into the hospital and for Violet to do anything to jeopardize that and harm patients is certain to bring out the true fighter in Isobel. My prediction is that Violet will realize that she is in the wrong and allow Isobel's wishes to win over. Though how that happens is surely a mystery for now.

Alright, fine. This is more of a wish than a prediction, but I think it would be a huge relief and a beautiful sight to see these two actually get married without a hitch and live out the rest of their lives together, for as long as they may live. It seems to me that as long as both survive the end of the series, their B&B idea would definitely take off. And maybe Anna and Bates could help out.

4. Thomas Tries To Embrace His Identity

Rob James-Collier has revealed in interviews that Thomas will face "psychological torture" while trying to accept and embrace his sexuality. Now that the people of Downton know about his identity, there is bound to be prejudice. My prediction is that Thomas will have to fall hard before he can finally accept who he is and be proud of it for the first time ever. Perhaps even though he is persuaded to stay away from Thomas at first, Andy will help Thomas and they can become close?

In one of the trailers for Season 6, Edith says that she desires to have a life, and I predict that the final season of Downton Abbey will give her just that. Edith deserves to have something good happen to her for once, and now that she runs Gregson's publication, she can start a feminist revolution. It's the right time in history for feminism to start taking shape, and there's no one who is more fit to be an outspoken voice for change that Edith who is bound to live her life as a single mother with strength and class.

I know some people hope that Mary and Tom will end up together after figuring out that they're in love and reuniting in America (cough cough some Bustle writers that is), but no matter how it happens, I predict Mary will find proper love this season. She had quite the love triangle going in Season 5, but it's time for her to have one man again and to gain the strength to run Downton in potentially its final days rather than continuing Lord Grantham to stifle any changes. Could Mary's man be Tom in the end? Perhaps, but it's more likely that Matthew Goode's Henry Talbot will claim Mary's attention as it already did in the Season 5 Christmas Special.

Isobel sacrificing her love with Merton thanks to his insufferable children was unbearable in Season 5. So doesn't seem only fair that Merton finally put his children in their place and allow himself and Isobel to be happy together? I truly predict Isobel will hear from Merton again with the potential for reunion.

There will likely be more health issues on Downton Abbey Season 6 thanks to the flu epidemic of 1926. The flu epidemic at the time was so bad in many European countries including England that people believed it would become a global pandemic. It might not have been as deadly as the Spanish Flu epidemic, but someone is likely to fall sick or potentially even die from it. My guess is that it will be either Isobel, Violet, Carson, Hughes or maybe even Thomas.

I would be surprised if Tom didn't return for the predicted closing of Downton. It would make sense for Tom to come back to help close the doors and get one final look at the home where he fell in love and had a child, even though Lady Sybil did pass away.

Unlike like the Carson & Hughes point above, this is not a hope. This is just what Anna and Mr. Bates deserve. These two have been through so much drama that it's about damn time that everything bad in their life is resolved and my guess is that they go to a far away place (or to Carson & Hughes' B&B) to start a brand new life together.

We can safely assume that as technology continues to evolve, Downton Abbey will continue to show us how that affects everyone on the show, especially Lord Grantham and Carson who seem ill-equipped to handle any real change. We've already heard talk of cars and seen Henry Talbot race off in a rather awesome-looking one, so race car driving could become a topic of discussion on the show. Plus we have technology improvements like the first transoceanic phone call of 1927 and Lindbergh's transatlantic flight making travel and communication better for all. This could help keep in touch with Rose and Tom, but all the changes could also overwhelm people upstairs and downstairs at Downton.