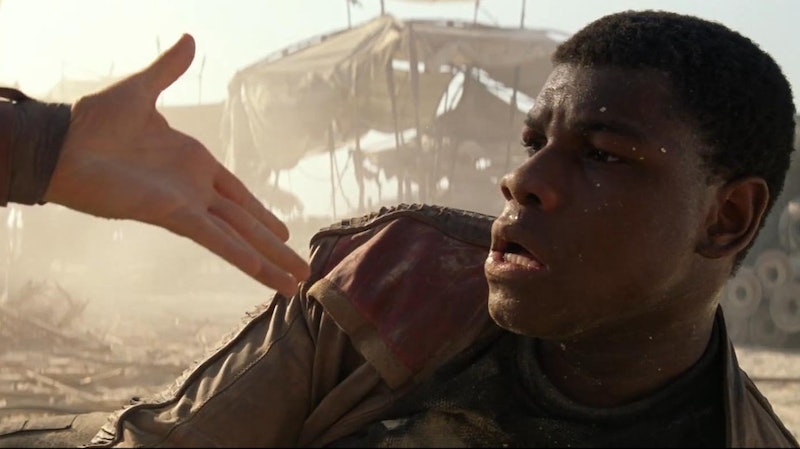 Among the cast of fresh new faces in The Force Awakens, we've been really excited to learn about Finn. I mean, up until recently all we knew about Finn was his name and his status as a Stormtrooper. So here's something decidedly amusing (and mild spoilers ahead): "Finn" is not the renegade Stormtrooper's name at the beginning of the film. He actually starts off with the title of FN-2187. Those four of you in the audience who haven't watched the movie yet must be wondering how does Finn get his name in Star Wars: The Force Awakens? Well, there's two answers for that, and it goes deeper than you'd think.

Let's start with the more literal answer in the context of the film: it happens very in-the-moment by way of Poe Dameron. Finn helps Poe escape First Order capture because it's "the right thing to do" (JK, he needs a pilot) and introductions are made as they're taking off in a Tie Fighter. Poe introduces himself appropriately, and then Finn stumbles because, well, he doesn't really have a proper name. It seems like this next gen of Stormtroopers is made up of kids that were ripped from their families when they were super young are trained, from that point forward, to become the helmeted soldiers you see today. Subsequently, Finn was never given a name so much as he was given an ID: one more time, that ID is FN-2187. Poe, bless his heart, is basically like, "Yeah, I'm not gonna call you that." So, instead, Poe christens him as Finn, which our new friend adopts for the rest of the film. Awesome.

But, as silly as Finn's non-name sound, there's actually a bit of Star Wars history that goes into his given number, one that goes beyond the galaxy far, far away. 21-87 is a Canadian short film that had a profound influence on original Star Wars director George Lucas and his works, this particular franchise included. In fact, in A New Hope, Princess Leia's cell number on the Death Star is 2187. Though the Star Wars legacy has been placed in another's hands (J.J. Abrams, what up), the legacy of 21-87 lives on.

So there you have it, folks. While Finn's name signifies a personal rebirth, his number pays homage to an ongoing trend in Lucasfilms. You gotta love this series for it's dedication to tradition, you know?