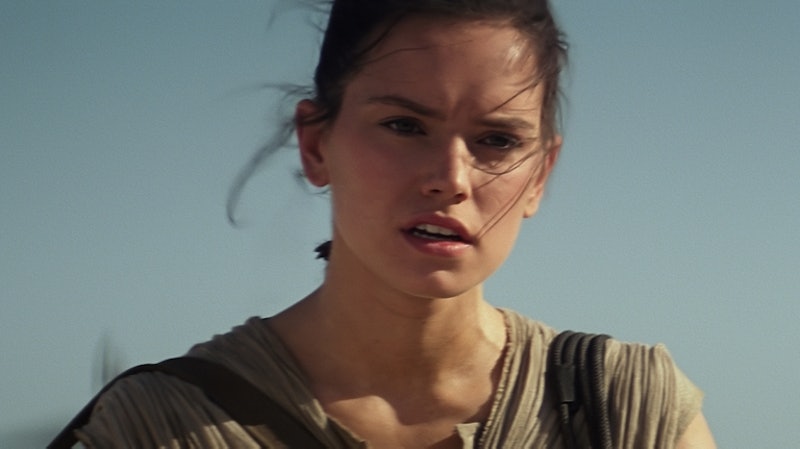 The moment is almost here. The day fans have been waiting for for decades; their entire lives in some cases. A sequel to the original Star Wars trilogy is arriving in theaters in the form of The Force Awakens on Dec. 18, and with it, a ton of new Star Wars characters. Sure, a lot of the excitement for The Force Awakens surrounds the return of players like Luke Skywalker, Leia Organa, Han Solo, and Chewbacca, but the film is also starting a brand new Star Wars trilogy. And that means lots of new characters to carry the torch for the next several years. But who are these newbies?

Unless you've somehow managed to avoid seeing any information about the new film (nearly impossible since it's all anyone ever talks about, and rightly so), you're probably at least familiar with the so-called big three of the new movie: Rey, played by Daisy Ridley; Finn, portrayed by John Boyega, and bad guy Kylo Ren, who's played by Adam Driver. You've also undoubtedly seen the adorable new droid, BB-8, who has already become the film's unofficial mascot and the most beloved movie character in some time. But they're just the tip of the ice planet Hoth. There are loads of new characters in the film, so here are all of the ones who've been revealed so far.

Rey is believed to be the main protagonist of the new trilogy, and she also happens to be female, which says a lot about how this new Star Wars is treating gender equality compared to the nearly womanless Star Wars of old. Rey was abandoned on the desert planet of Jakku at age five, where she learned to become a scavenger in order to survive. It's believed that she comes into possession of Luke Skywalker's old lightsaber, and at some point she joins up with the Resistance to battle against the evil First Order. She also rides around on a sweet hoverbike known as a Speedster, wields a kind of bo staff, and somehow comes into companionship with BB-8; who belongs to Poe Dameron (more on him later). She's also heavily rumored to be the offspring of Han Solo and Leia Organa.

Finn was a Stormtrooper for the First Order who becomes marooned on Jakku and meets Rey in the beginning of the film. He reforms his ways and joins the Resistance, and he might be a Jedi as he's seen wielding a lightsaber (believed to be Skywalker's original) in the trailers. There are also theories that Finn isn't his real name, and is short for his Stormtrooper ID number of FN-2187. Plus, he engages with Kylo Ren in a lightsaber battle at some point.

Ren is a commander of the First Order and a strong user of the Force. He uses an iconic crossguard lightsaber that he built himself. Ren is not his birth name; he adopted it after becoming a member of the Knights of Ren, a mysterious cult that formed sometime after the events depicted in Return of the Jedi. Kylo is rumored to be a religious fanatic, with the object of his fervor being Darth Vader.

Dameron is a talented X-Wing fighter pilot for the Resistance, and the owner of BB-8. His parents were members of the Rebel Alliance that fought against the Empire, and were friends with Luke Skywalker. At one point, he appears to become a prisoner of Kylo Ren, who uses the force on him.

The galaxy's cutest droid, BB-8 belongs to Dameron but spends a lot of time with Rey. He is an astromech droid, like R2-D2, meaning his job is to work on starships. He also rolls around like a ball, and was remarkably portrayed by a real robot — not CGI.

The leader of the First Order and the head bad guy in the film (unless you buy into the Luke Skywalker theories), Snoke is a CGI-rendered character that's about 25 feet tall. Very little is known about him other than that he's a very strong user of the Dark Side of the Force and he has a very distinctive face that would have been impossible to duplicate in real life.

Maz is a lot of things, but mostly she's shrouded in mystery. She is a pirate, a smuggler, lives in a castle, and is a thousand years old. She also wears special goggles because her eyes hold some kind of unrevealed power. She's the second (of supposedly only two) fully-CGI character after Snoke, and is rumored to be the character handing Rey Luke Skywalker's light saber in the trailer.

Hux is a general for the First Order and commands their main base, Starkiller. He's described as young, confident, and ruthless.

Zuvio is a law officer at a trading post on the planet Jakku. He's described as vigilant and humorless, and almost definitely comes across, and possibly into conflict with, Rey.

A green scavenger on Jakku, Teedo rides a semi-mechanical creature known as a luggabeast. He captures BB-8 at one point, though it's not known what his intentions were for doing so.

Yet another scavenger, probably on Jakku, Plank needs to wear a special mask that allows him to breathe the atmosphere of his home planet. He's believed to be very unfriendly, even for a scavenger.

Almost nothing is known of Leech, save that he is the leader of the Kanjiklub gang, an intergalactic crime ring. The only known image of the character is the above Lego figure.

Plutt owns a junkyard on Jakku, and maintains control of it thanks to a group of thugs he commands.

Toowers is a frog-like creature that works as a mechanic on the starfighters of the Resistance.

A member of the Abednedo species, Asty is a talented fighter pilot for the Resistance, but he's described as sometimes being reckless.

Nicknamed Buford, this droid helps worked on the Resistance's starfighters.

AKA Peazy, this is another droid of the Resistance. Peazy is a female droid who works in the base control rooms as a tactician. She's a protocol droid, like C-3PO, and acts as Leai's assisant.

Almost nothing is known about this character, save that he lives on Jakku and has some sort of interaction with Poe Dameron and BB-8. But given that he's played by screen legend von Sydow, it seems his role will be much more important than that.

There they are, 19 new characters in Star Wars: The Force Awakens. And keep in mind, these are just the ones who've been revealed so far. There will be more, and some may even prove important, but the characters provided here should provide more than enough ammo to come up with as many theories about the new movie as your heart desires.

More like this
Everything To Know About The Musical 'Joker' Sequel – & Lady Gaga’s Role
By El Hunt and Sam Ramsden
Stephen Graham’s Wife Plays A Vital Role In His Career
By Emma Madden and Sophie McEvoy
Revisit 1992’s 'A League Of Their Own Cast' Photos After The New TV Series
By Grace Wehniainen
Does 'Locke & Key’s Ending Mean There Could Be A Season 4?
By Sophia Moore
Get Even More From Bustle — Sign Up For The Newsletter