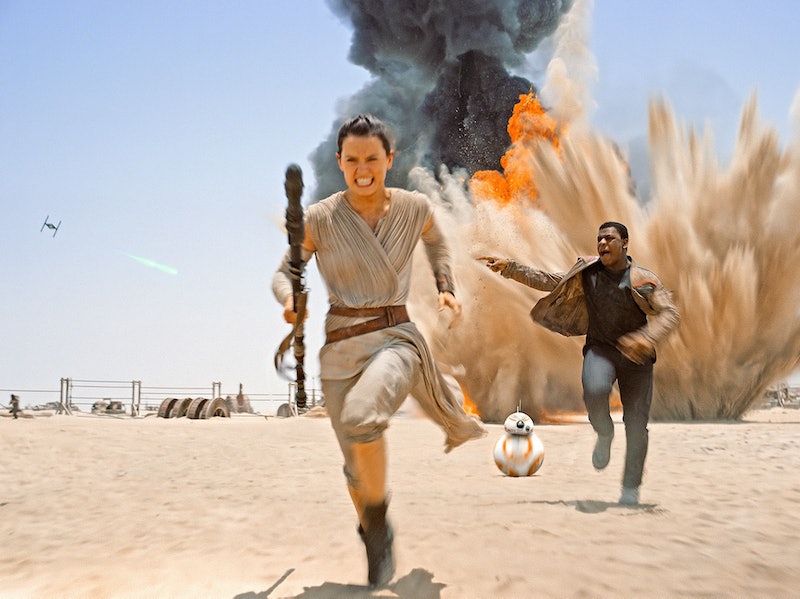 Everyone's favorite Stormtrooper is a source of unending mystery to me. While we get some clues about Rey's past and parents over the course of the film — what with her being the main character — Finn is more of a walking question mark. SPOILERS AHEAD. Hell, Finn isn't even his name; it's a name created for him by Poe, based off his Stormtrooper designation of FN-2187. Finn was raised as a child soldier and the only allusion to his birth parents is in the revelation that he, and other Stormtroopers, were taken from them young and raised with a fanatical devotion to the First Order. So is Finn related to a past Star Wars character? Will we ever get to find out Finn's backstory at all? Can someone give the kid a last name?

The strongest theory for a connection between Finn and the former Star Wars film is a fan theory held by John Boyega himself. Many people — Boyega and Samuel L. Jackson himself included — think that Finn is the son of Mace Windu. Jackson played the character in The Phantom Menace, Attack of the Clones, and Revenge Of The Sith, the latter movie in which he was killed by Emperor Palpatine and some Force lightning. He experienced new life in the Star Wars expanded universe, and, if Finn turned out to be his son or grandson, that would, at least, explain where one of his parents are — and how he was able to wield a light saber well enough to hold his own against Kylo Ren in The Force Awakens. It would also add a tragic twist to the fact that he ended up as a Stormtrooper before he abandoned the First Order.

The other popular theory for a connection between Finn and the former Star Wars film is the son of Lando Calrissian, a theory that's also particularly strong because Billy Dee Williams has teased that he will be appearing in these new Star Wars films. Lando is a gambler and smuggler who appears in The Empire Strikes Back, eventually joining up with the Rebels after a period of moral ambiguity — and moral ambiguity certainly fits in with Finn's journey from dedicated Stormtrooper-slash-human weapon to unambiguous hero and companion to Rey. However, Lando being his father wouldn't really explain how Finn can fight Kylo Ren with a light saber, so Mace Windu is still looking pretty good.

While theories abound as to Finn's heritage, the fact of the matter is that he has to be related to a Star Wars character. As The Force Awakens drills in, at the time of that film, Luke is the only Jedi left in the universe, hence why Rey had to go to him to get trained in how to wield the Force. If Finn can wield the Force well enough to hold his own against Kylo Ren, that means that his parents have a lot of explaining to do.