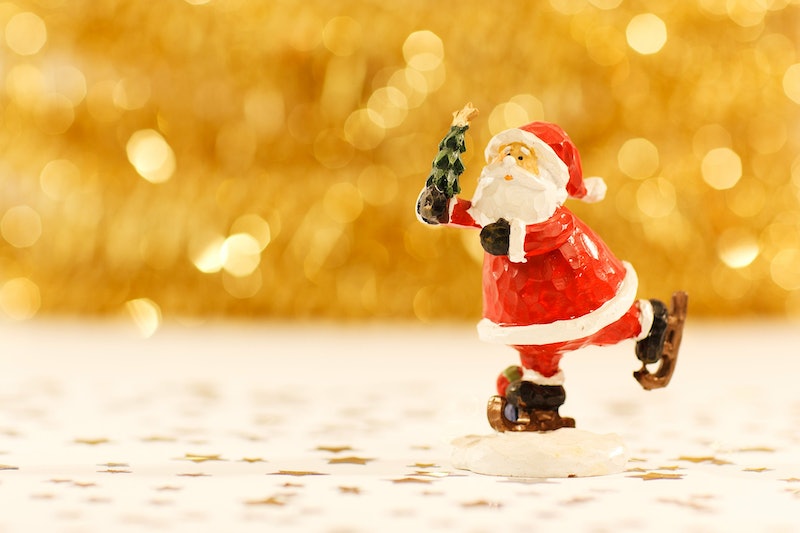 Every December, we regale each other with stories of Santa and his reindeer, his magical sleigh, and that one night of the year where he makes little kids' dreams come true — but where do these stories come from? Why does Santa Claus live at the North Pole? Why do naughty kids get lumps of coal for Christmas? If you want to punish kids these days, it seems to make more sense just to take away their iPhones and Instagram accounts, right?

But those are far from the only questions to which the legend of St. Nick gives rise. I'd really like someone to explain to me how Santa gets into homes that don't have chimneys, for example. Does he break in? Does he set off burglar alarms? Has Santa ever come close to getting arrested? Who would pay his bail? Mrs. Claus? Does she ever travel with him? What about the elves? What would happen to the reindeer and his sleigh? What happens if Santa doesn't like the cookies you leave out? What if Santa's gluten sensitive? My head is spinning.

Countless movies, books, and songs are based on Santa's story, and yet we often don't think abouts why he is the way he is. In an effort to get to the bottom of the mystery, I did a little digging; it turns out that some of these traditions stem from literature, while others are based on religion. Let's delve a little deeper into where this jolly man's story comes from.

Santa and the North Pole

The figure of Santa Claus is based on Saint Nicholas of Myra, who lived in a Roman town located in what's now Turkey. So how did his headquarters end up all the way at the North Pole? We can thank cartoonist Thomas Nast for that. According to Mashable, the Arctic was seen as a bit of a fantasy land during the mid-1800s, largely thanks to all of the expeditions held to the location (none of which would be completed until 1909). It was known as a place of constant snow — and snow had become associated with the holiday spirit and Christmas cheer. No one had seen the North Pole. No one knew what was happening there. It was mysterious and just out of reach. It made the perfect location for Santa's home and his bustling workshop.

P.S. Nast is also responsible for the physical appearance of Santa that we have grown to love. He was the first person to draw the famous figure as round and jolly.

Why Do Naughty Children Get Lumps of Coal?

There are a variety of explanations for this "gift" to kiddies who have been placed on the naughty list, but the most popular reason why bad kids get coal on Christmas is convenience. Santa is wriggling down the chimney to deliver awesome gifts to the kids who behaved all year, and he needs something for the little twits who've been causing trouble. So he's stuck in the chimney and he's like, "Oh, hey, look. Coal." And he grabs that and sticks it into naughty kids' stockings.

Another story behind coal is heat and Santa helping people in need. Remember Ebenezer Scrooge? He wouldn't give even a lump of coal to Bob Cratchit, who was freezing his butt off in his office.

Elves weren't always known as St. Nick's busy little workers, and forget about Will Ferrell for a minute. These youthful and immortal creatures, with their pointed ears, originated as magical beings living underground and in forests. They were believed to protect your home against evil spirits. They were mostly harmless; but if they didn't like you, they could give you nightmares! Eek. They were also commonly referred to as "house gnomes."

According to The Holiday Spot, elves as we know them today were shaped by Scandinavian writers of the 1800s. Since elves were already good at picking out people who are naughty and nice — and since they were already associated with storying-telling, magic, and fantasy — it makes sense that they were weaved into the story of Christmas. Although they were still viewed as potentially mischievous creatures, the stories around them shifted almost entirely to their roles as Santa's loyal helpers. Some looked after the reindeer. Some did repairs on the sleigh. Some cleaned the toilets. The mythical elf as it was created (that is, the house gnome) became virtually unknown, replaced almost completely with the story of Christmas.

Now, back to Will Ferrell.

The Tradition of Gift-Giving

One of the most prominent parts of the holiday is the act of giving gifts. It's not what it used to be though. There are unruly and sometimes violent crowds, parking spots that are only available in the nosebleed section, and that dreaded worry that someone you didn't buy a gift indeed got one for you. Christmas has a real way of making us feel like cotton-headed ninny muggins.

This tradition is deeply-rooted, however. Why do we give gifts on Christmas? In large part, this comes from the three wise men, who brought the baby Jesus gifts of gold, frankincense, and myrrh. Yet another version of this goes back to Saint Nicholas of Myra, who believed strongly in Christian principles and became famous for his love of giving gifts.

There is a whole psychology behind gift-giving, and research has shown that while many of us find it to be materialist (and sometimes a huge pain in the butt), giving and accepting gifts helps to strengthen relationships and often brings the most happiness and pleasure to the giver. So this Christmas, try to remember the joy of giving; and if you receive a special present, just say thank you.

Christmas will forever be one of the most special times of the year. Give thanks, have a cocktail, and spread Christmas cheer.