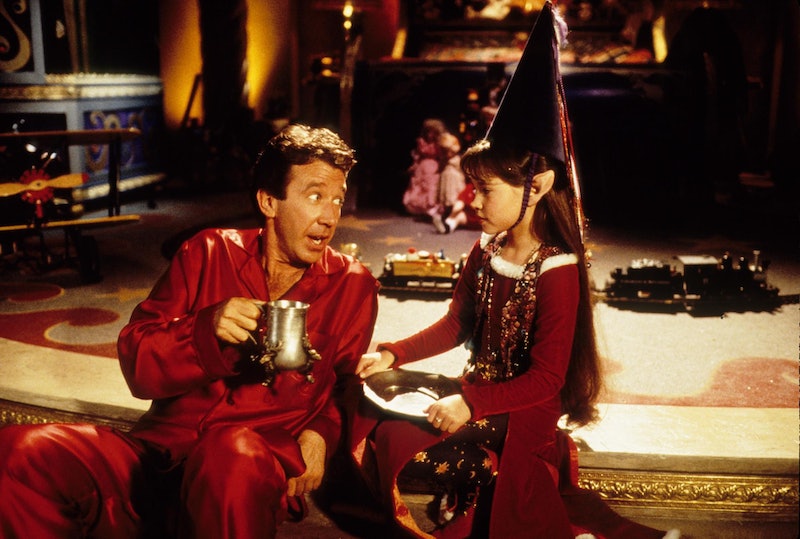 There are a lot of Christmas movies out there to choose from during the holiday season, but let's be real — only one of them really matters. The Santa Clause has been a classic must watch in my house every year since I was a kid, and I can't imagine wrapping presents without Tim Allen's voice in the background. There's only one problem: There are a ridiculous number of plot holes in The Santa Clause.

At its core, The Santa Clause is a pretty relatable story. A divorced dad wants to get closer to his kid, while he and all the adults around him are suffering from a serious lack of Christmas spirit. But then, the more magical details of the plot get introduced, and that's where things start to get a little hairy... and not just because Scott Calvin's beard quadruples in size and volume in a matter of days. And best of all, as an audience, we are just supposed to accept it as a natural part of the Santa process. You're telling me this guy accidentally murdered Santa, put on the dead man's clothes, and I'm not supposed to ask questions?

Here is everything that doesn't make sense about The Santa Clause... including the obvious. It's a good thing suspension of disbelief is a big part of any Christmas movie, right?

1. Where Did The Last Santa Actually Go?

When he falls off the roof, we see him vanish, leaving everything but his clothes. The idea is that Santa is dead, right? But there's no body to prove it, and when Scott and Charlie get to the North Pole, the original Santa is nowhere to be found, so it's not like he just went home to chill and let someone else take over his duties. So we're supposed to believe there's a dead naked guy in Santa Heaven somewhere, supposedly? That's the only explanation I can come up with.

2. How Was Scott Calvin Chosen?

Was it totally random that Santa fell off his roof, or did he commit Santacide because he knew Scott was a nice guy from the 'burbs who would do the job proudly and wanted him to take his place? And more importantly, if Santa's doing such a dangerous job that part of the contract details what happens if he dies, why does he not travel with a magical EMT for safety? Or at least strap a bungee cord or two to his suit?

3. Why Aren't The Elves Sad That Santa Is Dead?

This guy was their boss, and a beloved one at that. If Scott Calvin fell off a roof, I bet they'd be pretty heartbroken, because they all seem to grow attached to him pretty quickly. Does Santa die so frequently that the employees of the North Pole are desensitized to the sudden death of their coworker? And more importantly, why is this movie getting more and more morbid all of a sudden?

4. Better Yet, Why Is Santa's Actual Family Not Sad?

Again, if Scott fell off a roof, Charlie (and probably his mom, but probably not Neil, because he's a douchebag) would be mourning the death of his father. Assuming that Santa has a real family and friends the rest of the year like Scott does, surely they noticed he's gone. And since Charlie can come to the North Pole and bond with the elves, the last Santa's kids would have, too. So why are they not looking for answers?!

Thanks to The Santa Clause 2, we know that getting married and providing a Mrs. Claus is a requirement of the job that is so important that Christmas literally ceases to exist without her. So why wasn't she at the North Pole, mourning the loss of her husband? What happened to her? Is she OK? Wherever she is, I hope she's happy.

6. Where Did The Elves Come From?

Is this an entire race of people that has been kept under wraps for centuries? I'm assuming so.

7. And What Is Up With Bernard?

Why is he so much larger and older than the rest of the elves? Do we have an Elf situation on our hands? Was he born to human parents and adopted by Bob Newhart?

8. How Has The Secret Of How Santa Works Never Gotten Out?

Scott Calvin is kind of a blabbermouth. He talks to just about every child who wakes up when he's delivering gifts. And I don't know if you've ever met a kid, but they are horrible with keeping secrets. I don't care if they are trying to keep the magic alive, because there's always that one mean kid who wants to ruin it for everybody else.

9. Why Is Charlie's Mom With Neil?

This guy is the worst. He's kind of unkind to Charlie, he psychoanalyzes everyone he meets, and he sucks the fun out of every room he walks into. Charlie's mom seems like a really nice lady, and she could do better. So why not kick him to the curb?

10. Why Didn't Santa Bring Neil & Laura The Presents They Wanted In The First Place?

This whole Santa operation is a big deal. Elves are working 'round the clock, the North Pole law is forcing unsuspecting civilians to take on the Santa role at a moment's notice, and you're telling me the big guy couldn't bring Neil his Oscar Mayer Weenie Whistle and Laura her Mystery Date game when they were kids? It's not like either toy is expensive or hard to procure. Why did it take decades later for a Santa to finally get this right?

11. Where Are The Parents Of All Those Kids At The Park?

I'm telling you, if my child tried to sit on a stranger's lap at the park, I would call the police so fast that they'd need a Santa replacement again. I know things were safer in the '90s, but geez.

12. What Happens To Scott's Job While He's Being Santa?

No offense to his boss at the toy company, but he's kind of a jerk. There's no way that guy puts his job on hold for him from Thanksgiving to New Year's without hiring someone else.

He could probably live in the North Pole full time. Think of all that hot chocolate!

14. And, Most Importantly, Where Do The Parents Think All These Gifts Are Coming From?

Adults don't believe in Santa, right? But Santa is actually real and does exist in this universe (and ours, duh). So where did they think the gifts from Santa came from when their kids started opening stuff that Mom and Dad didn't buy? Wouldn't that be enough to convince them? Or at least make them concerned about a break in? And it's not just The Santa Clause that's guilty of this — it's just about every Christmas movie ever.

I need answers. Maybe we need a Santa Clause 4 to clear everything up? Just make sure it's better than The Santa Clause 3. That was a mess.