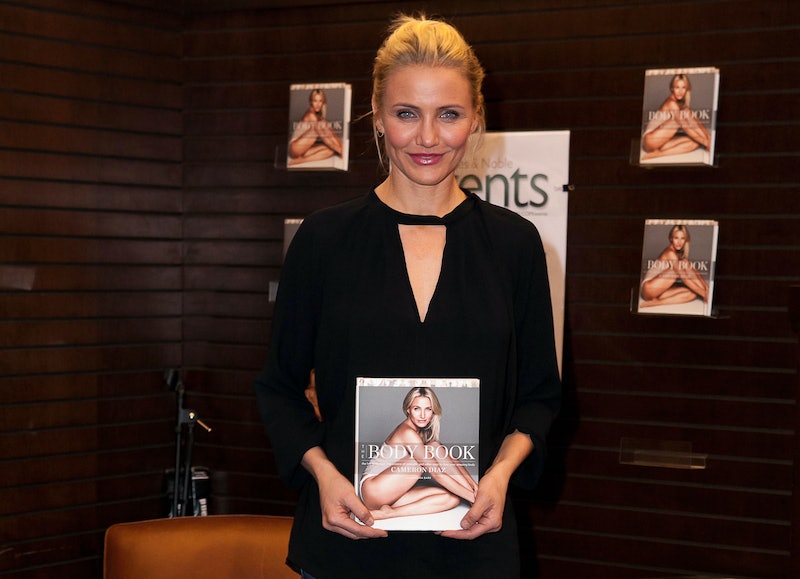 It's official, Cameron Diaz has an opinion about everything. Diaz is being both criticized and celebrated for comments made in her newly-released book, The Body Book: The Law of Hunger, the Science of Strength, and Other Ways To Love Your Amazing Body. The 263-page book covers topics ranging from health, nutrition, and exercise to, um, more sensitive subjects. Specifically, Diaz is receiving her latest wave of attention regarding thoughts on pubic hair; in a section called, "In Praise of Pubes" (yes, really) Diaz encourages women to keep their pubic hair in its natural state, claiming that the idea of permanent laser-hair removal sounds like a "crazy idea" to her.

And, in a week during which American Apparel debuted full-bush-baring window displays, Diaz's "pube-gate" lands during a time when there's more talk than usual in the media about lady grooming. But there are a few things here worth noting.

It's great that Cameron Diaz wrote a book on health — that woman is 41 years old and clearly doing something right. If there's a book telling me how to work toward a physique like hers, I'm at least going to flip through it in Barnes & Nobles while I eat a muffin. Even if she does start one section by saying, "let's talk about poop, baby!" I'm at least willing to hear what Diaz has to say about health because, well, she looks like she knows what she's doing.

However, Diaz's comments about pubic hair are a little disconcerting for a handful of reasons. First of all, remember when she was very vocal about being disturbed at her friend being "obsessed with having a '70s vibe bush?" That friend turned out to be Gwenyth Paltrow, whom Diaz said she "pinned down" to, uh, give her a trim.

Diaz has defended herself in response to criticisms by saying that she doesn't care what anyone does with her own pubic hair (I imagine Paltrow might feel differently), but is simply saying that pubic hair has a purpose and is there for a reason.

While I can appreciate encouraging women to embrace their natural body rather than the socially-driven idea of hairless femininity, there seems to be a double standard here. As Emer O'Toole touched on in her article for The Guardian, Diaz's views beg the question: well, what about other natural body hair? Something tells me you aren't going to see Cameron Diaz at any premieres or photo shoots with hair under her arms.

Despite good intentions, Diaz's espousal of going au naturel is just as bad as anyone's mission encouraging women a woman to get waxed simply because it is the assumed societal standard. Diaz's book should not be an evangelical treatise for her own (obviously inconsistent) ideas on body hair.

Diaz preaching to other women about what they should or shouldn't do only adds to the constant cycle of body shaming, leaving women questioning our own decisions and why we make them. Women should be able to choose how we do things — including our preferred grooming — without a dozen voices providing commentary on it.

While Diaz's comments may have dangerous connotations, her voice is certainly being heard and in many ways, this is important — regardless of what she is saying. Speaking on a subject that would have been considered taboo in the not so distant past and sparking a vivid, active debate driven almost entirely by women is something that can be acknowledged as a step in the right direction, certainly — even if what she is saying makes some of us a little angry.

You may have immaculately sculpted abs, Cameron Diaz, but you don't get to tell women what is right, wrong, or "crazy" in terms of pubic hair.