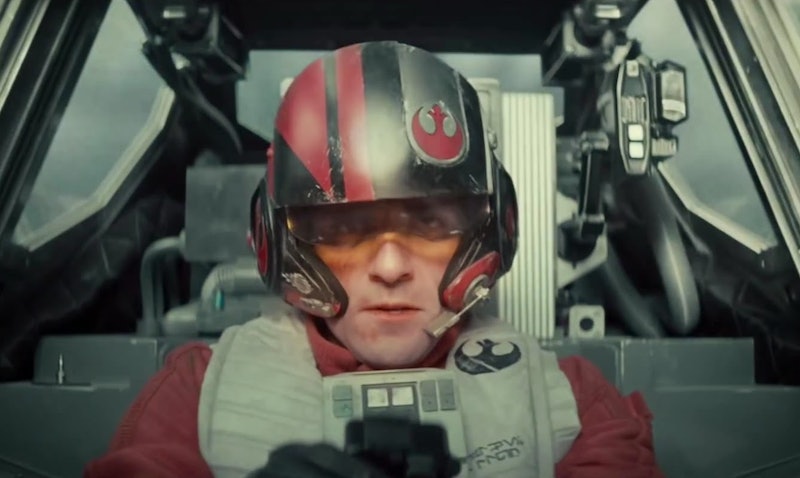 When Star Wars: The Force Awakens first begins, we're immediately introduced to new characters, but, for me, I can't help but wonder if they have any connections to the old. Take Poe for example. Is Poe related to any original Star Wars characters? SPOILERS AHEAD. The Force Awakens journey begins with the character Poe Dameron (played by Oscar Isaac) and the film's brand-new Droid, BB-8, as they fight to protect a hologram: The map to Jedi Master Luke Skywalker. While we don't quite know where they got it, or where it came from, what we do know is that they have it. We soon learn that their job is to deliver it to Luke's sister — and current General for the Rebellion — Princess Leia. So, basically, the movie seems to start off on a pretty random note... unless Poe is related to Luke Skywalker in some way.

Fate seems to guide the story as BB-8 and Finn stumble across Rey — the one person with the power of the Force that Luke has been calling on this whole time — and they team up to deliver the information, even when Poe is supposedly "missing." Interesting, right? The perfect timing of it all, the way that Poe magically disappears after his crash with Finn, and the way that he just happened to own the Droid carrying this information. So, was it a set-up placed by Princess Leia (as he is a Pilot for the Rebellion after all and she happens to be "searching" for her brother)? Or is he in direct relation with Luke? Or, perhaps, there's something more to it all?

My guesses are as follows: Luke sent Poe on the mission to deliver the map to his sister, and Poe "accidentally" crashed the ship (knowing they'd still survive) in the place where he knew Rey was currently living. Either that, or Poe is actually a Jedi himself. Perhaps someone training with Luke who has stayed with the light — and taken after his father in becoming a pilot — because Han Solo and Princess Leia are actually his parents. And Kylo Ren is his brother. Talk about brotherly feuds.

OK, I know. These theories are getting insane to think about! But, Han and Leia never said that they didn't have another son. And they never came in contact with Poe during the film to help give us any clarification about who Poe's character actually is — except that he works for the Rebellion and was sent to retrieve and bring back information on Luke's whereabouts. It's all left up to theory. Considering the importance of his job, I feel as if he needs to be connected somehow.

Overall, there's one thing we should take away from Poe's character in Star Wars: The Force Awakens. Don't underestimate him. I highly doubt he's just some random pilot. And whether you agree with any of these theories or not, the fact is this: He had to come from somewhere. And, soon, we'll find out where.