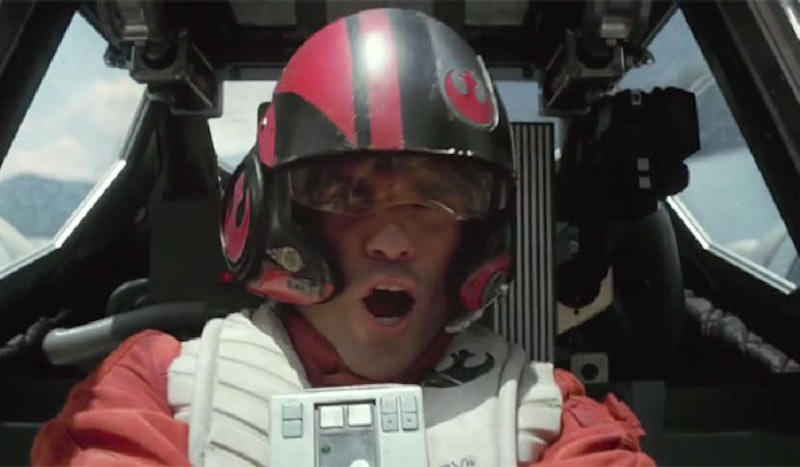 Do you have your light sabers ready, Star Wars fans? Because we're getting closer and closer to the release of Star Wars: The Force Awakens in theaters everywhere Dec. 18. What makes the return of this Star Wars movie, the first in over a decade, highly anticipated is the amount of mystery surrounding the plot and the surprises in store for the characters new to the series. The film is introducing a slew of fresh faces — faces who also double as rising stars in Hollywood. There's Adam Driver from HBO's Girls as Kylo Ren and Lupita Nyong'o, who won an Oscar for her role in 12 Years A Slave, as Maz Kanata. If you've been keeping up with The Force Awakens news, you already know that Rey (Daisy Ridley) and Finn (John Boyega) are major players. But let's talk more about Poe. Who is Poe Dameron from The Force Awakens , as portrayed by Oscar Isaac?

In the grand scheme of things, the introduction of new characters like Poe not only adds a sense of newness to an old franchise, but also helps draw in new fans who have been missing out. Here's what's known about Poe so far:

1. He's An X-Wing Fighter Pilot Of The Resistance

Furthermore, Isaac, at a panel back in April, described Poe as "the best freaking pilot in the galaxy." He's also a leader in the fight against the First Order.

That's right, this cute lil' droid belongs to him. Poe is one lucky guy.

3. He's More Than Likely From Yavin

"What’s actually very interesting is that Yavin... at the end of the very first Star Wars... that last scene was shot in Guatemala and you know, I think that Poe Dameron is from that planet... and that’s a beautiful coincidence," Isaac told the Associated Press about Poe. For a quick refresher, in the original Star Wars series, Yavin is where the Rebel base is located.

4. He Gets Tortured By Kylo Ren At Some Point

Maybe he's the one who gets kidnapped, as suggested by one of the soundtrack's titles?

5. ...But He Lives Because He'll Be For Back For Star Wars: Episode VIII

Isaac confirmed his return after The Force Awakens with Moviefone, though in what capacity remains unknown.

6. He Gets Sent On A Mission By A "Certain Princess"

"Princess" most likely refers to Leia, as Isaac has implied. It's through the mission that Poe comes to meet Rey and Finn to begin with.

7. Furthermore, His Fate Is "Intertwined" With Finn's

So we'll definitely get used to seeing them together.

It'll be interesting to see how Poe's story pans out throughout the next two Star Wars films. I have to confess, I have a weakness for guys who can fly cool aircrafts, so I'm hoping that that Force is with him all the way. Currently, fans really don't know much about him, making the wait for more to be revealed about him (and The Force Awakens in general) all the more unbearable.