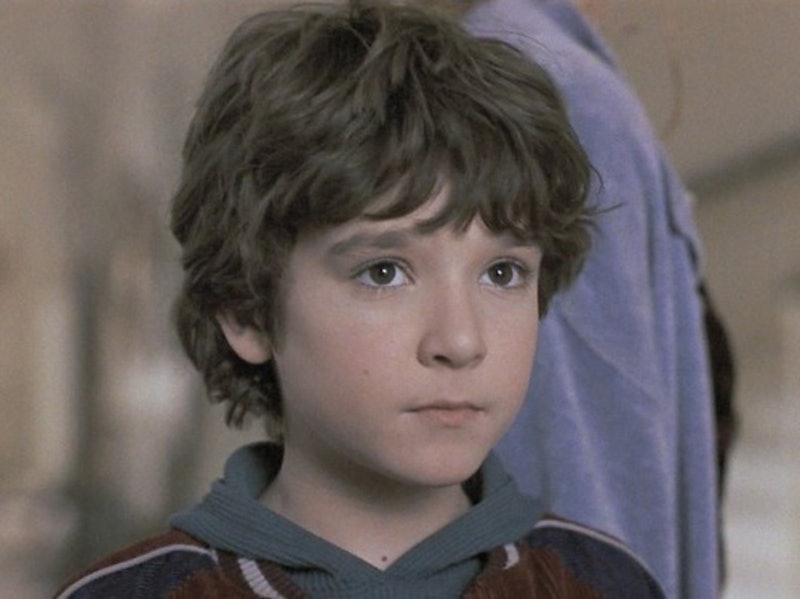 A lot has evolved since 1995's fantastical Jumanji hit theaters 20 years ago. CGI has advanced beyond what was possible two decades ago, the beloved Robin Williams has died, and there's already talk of a remake in the works. For the uninitiated, the movie goes like this: When children Peter and Judy Shepherd (Bradley Pierce and Kirstin Dunst) start to play a mysterious board game, they release a man, Alan (Williams), who has been trapped in the game for 26 years, and a handful of terrors — stampedes, floods, a dangerous poacher, man-eating vines, and more. Thirty-three-year-old Pierce, who played Peter in the film, recalls many special moments and relationships built while the filming the classic, but the co-star who had the biggest impact on 12-year-old Pierce was undoubtably the late Williams.

Just like Peter, who lost his parents in a car crash, Pierce also lost his father at a young age, and Williams acted as a temporary father figure, both on set and off. "Having a male role model like him was beneficial not because he was such a successful actor but because he was a good man. He was generous, and he was kind. I don't know if it was intentional or just the way I needed to have a friend at the time, but he was there to guide me," Pierce recalls.

"He gave me support beyond, 'This is how you become a good actor.' It was, 'This is how you you should treat other people. This is how you need to respect others.' Those were the lessons. And if you wanted to talk to him about anything he was there. Now, it was always with humor, but that was who he was. He was a really wonderful man."

Williams, who passed away in 2014, appeared in a handful of beloved children's films from the '90s including Flubber, Mrs. Doubtfire, and as the voice of Genie in Aladdin. This is a thread that Williams and Pierce share, another reason their bond was so strong. Similarly, Pierce also voiced an iconic Disney character in 1991's Beauty and the Beast. This is a commonality that Williams and Pierce share: They both voiced very famous '90s cartoon characters. "I was lucky enough to be a part of two classics. Two movies that still have huge followings: Jumaji and Beauty and the Beast — I was the voice of Chip. Those two movies have carried a lot of wonderful memories for me," the actor says.

Beauty and the Beast, which came out a year earlier than Aladdin, is getting a live-action remake starring Emma Watson in 2017. And it appears many favorite films of the '90s are getting the reboot treatment, Jumanji included. But Pierce isn't on board with the latter.

Pierce's admiration for Williams is the main reason the actor is opposed to a Jumanji remake, which may be hitting theaters Christmas 2016. "No one can ever be Robin Williams, and the magic of the original will never be there again," he says. "I'm sure there will be commercial success because it is such a classic, and so many people who grew up with it in the '90s will see it to revisit those memories, but I don't think it is a good idea. I think it would be a much better idea to take the story in a different direction, not use Alan Parrish as a character, and not use the storyline that was used in the original film."

Now a days, Pierce is a bartender, the co-founder of ZFO Entertainment — a "geek entertainment" company" — and a father. He's now driving his sons to their own auditions. "My eldest was watching Jumanji five years ago and he was like, 'Dad, can I be on TV, too?'"

It seems for Pierce, things have come full circle.