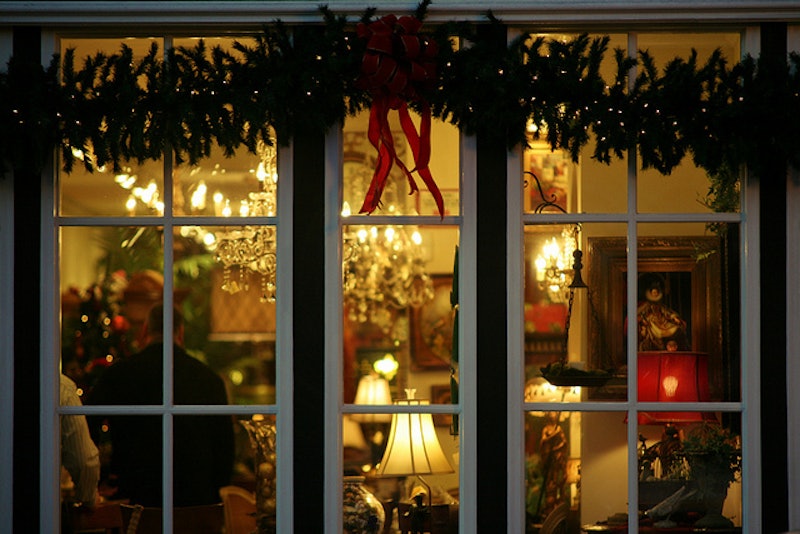 We hear the word "yuletide" all the time during the holiday season. It's kind of a weird word, right? Could you provide a succinct definition? "Oh, you know, like, 'something, something, yuletide carol'" does not count. I decided, because I have a lot of free time right now and enjoy doing research on seemingly useless things, to investigate the term. What does "yuletide" mean? Where did it come from? Why do we use it so much? Do we perhaps not use it enough? Oh ho ho, soon you will know. (I know. I hate myself for that, too).

According to Merriam-Webster.com, "yuletide" is a noun that means "Christmastime or Christmastide." This is simultaneously helpful and very much not, because who has ever heard the term "Christmastide" before? Am I the only person who thinks it sounds almost menacing? Like a giant, scary flood of red and green tinsel? To be fair, that is essentially what commercialism has done to the holiday season, but that is another grumpy rant for another time.

Anyway, an appropriate way to use "yuletide" in a sentence would be, "According to super stores across the United States, yuletide begins the day after Thanksgiving."

Turns out, the word "yuletide" is derived from an ancient Germanic lunar calendar period, "yule," and referred to a winter festival that took place around what we now refer to as December and January, probably falling close to the Winter Solstice. Scholars have connected the celebration to the Norse god Odin and the Anglo-Saxon pagan Mōdraniht, which meant "Night of the Mother" and may have involved a ritual sacrifice.

Yep: The word that so succinctly embodies all the rabid, sparkly Christmas spirit that we have to offer is in fact both pre-Christian and Pagan-based.

Following the mass spread of Christianity throughout Northern Europe, "yuletide" took on a slightly more familiar meaning and referred to the 12-day Feast of the Nativity. By the 1400s, "yuletide" had become a recognized Middle English term that has more or less retained the same meaning that we associate with it today. Like, doing Christmas stuff or whatever.

So there you have it. "Yuletide" is a badass word that goes back thousands of years, used to maybe involve some ritual sacrifices and like Norse gods and stuff, and now refers to Christmastime, or, more scarily, Christmastide.