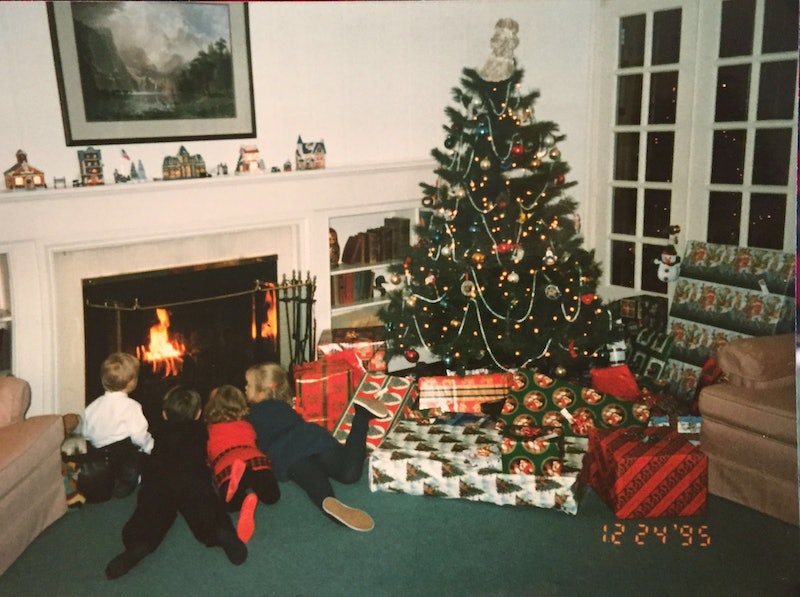 It was always my father who signaled the beginning of our ritual, a few hours after sunset on Christmas Eve. It was time to “drive around.” I’d lead the way, with my younger siblings close behind. We’d pile into our family minivan, and, barely constrained by seat belts, rock and squirm with larger-than-life delight as our father started the engine and backed out of the driveway — Christmas had begun.

For the next hour, we’d sail through the frigid streets of our suburban neighborhood, weaving along snowy sidewalks in search of the most glorious holiday lights we could find. Strung out on anticipation, we were dazzled by every plastic Rudolph, every swollen electric Santa, my dad chuckling at our incessant “oohs” and “ahhs.” While we swooned over “twinklies,” my mother, back at home, would be slipping a few choice gifts under the tree, piling her impeccably wrapped packages next to our lumpy, handmade offerings. Knowing this, we did not put up a fight when our father ended our tour, turning back home. When we pulled back up to the house — a few white lights over the door were our modest offering to the neighborhood display— my Dad was grinning, childlike, too. Like us, this was his favorite part: gift-giving.

My father, unlike us, had not grown up celebrating Christmas. Born into a proudly Muslim Palestinian family, he had only vague and second-hand notions of the holiday until he immigrated to the United States in 1983. Once here, he learned the importance of the holiday, as evidenced by the way malls, TV programming, and radio waves transformed by mid-November into a blizzard of Christmas jingles and “holiday deals.” It was exotic, new, fun.

For my mother, the season came as naturally, as invariably, as breathing — she was raised with Bible studies and church camps, attended Lutheran academies through highschool and college. As their relationship progressed, she introduced my father to her family's holiday traditions: warm dinners, gift exchange, lots of dessert. My mother attended church on Christmas Eve, too, which my father politely declined — but otherwise, he was at least as merry as the rest of them. He’d never eaten turkey before; to this day, it’s one of his favorite dishes.

As children, diving out of the car on Christmas Eve and plunging towards the stacks of presents, we never gave a thought to the fact that our parents came from two different religions. The overwhelming impression of the season, for us, was joy — Daddy was home, Mommy was smiling, our warm den was dripping with ramshackle rainbow lights, and outside, the world was all sparkle and glow. We’d drink chocolate (an equal number of marshmallows for each of us), then take giddy turns pawing open our brightly-colored gifts.

Islam, too, calls the faithful to give — annual zakat charity is a pillar of the faith, and karem, or generosity, is one of the highest virtues. My father’s Arab culture also taught him the art of feasting with loved ones. His mother, a legendary cook and impoverished divorcee, labored for days cooking elaborate meals to dish out to the dozens of neighbors and relatives who flocked to her apartment on Friday afternoons. The force of her hospitality could be overwhelming — seconds, and thirds, were thrust upon you. Kisses were not optional. Whenever we saw her, we left drowsy, full, and smiling.

Over the years, we grew to love and respect the noble traditions of both our parents. My mother and father are both deeply principled and incredibly hardworking, and their love of God and neighbor deeply informed the human being I’ve become.

Having two religions under one roof has also meant twice as many holidays — and sometimes-fraught conversations with proselytizers or skeptics. “Don’t you have to choose?” I've never understood the urgency of these questions. “Choose”? By this, of course, they mean to exclude — pick one faith over another, dismiss one set of beliefs in order to “truly” adhere to the other. I don’t see what would be gained by this — except, perhaps, a little bit of simplicity, a little more self-assurance, the kind of “security” that comes from believing that one knows the truth, the whole truth, and nothing but the truth.

I prefer a little mystery. I prefer to puzzle over the equal-but-different measures of wonder and worship that I see in my father and mother. If there is a God, couldn’t he be echoed in more than one language? Shouldn’t we be listening for him in the voice of the stranger? And speaking of Christmas, Jesus was born far removed from organized religion, and the disciples he led were a motley group with discordant ideologies and vehemently opposed affiliations. It seems to me that Jesus was comfortable with difference, too. Perhaps he learned it from Mary, that fearless young unwed mother who, the story goes, laid her reputation on the altar of God’s call. Let it be as you have said, she said in faith. I’m sure she was bewildered.

This year, as always, there will be signs of both my parents’ religions in our celebration. Our eggnog will be unspiked (halal), and there won't be any ham. We'll murmur a prayer in Arabic before we eat, thanking God in my father's tongue for another year of blessing, another Christmas Day together. And there will be carols, and candles, and cookies. There will be gratitude, and laughter, and games. And yes, Baba, there will be turkey, too. Inshallah, God willing.