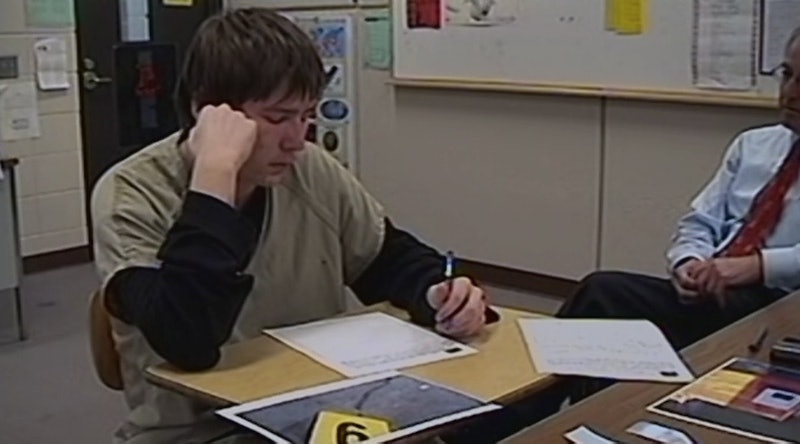 Netflix’s newest original true crime series, Making a Murderer , is already being lauded as the streaming service's answer to things like the show The Jinx and podcast Serial. Though Making a Murderer varies in some ways from Serial, one way that they they align is through the fact that there are two instances where a minor is questioned by police without the presence of a parent or guardian. Now, I'm no lawyer, but over the course of my intensive study of Law and Order: SVU over the years, I thought I gleaned that it was illegal to interrogate a minor without a parent present like what happened to Brendan Dassey, Steven Avery's at-the-time 16-year-old nephew in March 2006.

The creators of Making a Murderer do an excellent job of showing all sides of Teresa Halbach's murder trial that seemed like an irrefutable slam-dunk for the prosecution, especially after the alleged confession by Brendan Dassey from March 2006 (that he recanted during his trial in April 2007). In that now-recanted alleged confession, viewers of the Netflix documentary saw Dassey's taped interview with police in which he seemingly admitted his and Steven's alleged implication in the crime.

However, the specifics of this conversation are called into question several times throughout the course of the trial by Dassey's defense, according to Making A Murderer; they claimed Dassey's age and vulnerable mental state should be considered by the jury. (Avery's lawyer Strang described Dassey in the documentary as a "learning-disabled 16-year-old.") According to what viewers see in Making a Murderer, Brendan Dassey's defense team claim he was allegedly coerced into admitting to a crime he allegedly did not commit. In the docuseries, the sheriff's department strongly denied that and responded to those allegations claiming that Dassey's mother declined to be present, while she claims in the docuseries that she was never asked to be there.

However, here's where the law stands at least regarding the legality of the interview:

Police Are Allowed To Question Any Child

According to CriminalDefenseLawyer.com (a subsidiary of NOLO, an online legal information base) law enforcement officials are allowed under the law to question any child about their involvement in a crime. According to lawyer Peter Goldscheider, "The United States Supreme Court has approved such questioning of a minor in the absence of his or her parents. The police still have to give Miranda warnings if the minor is in custody ... In addition any statement the minor gives must be voluntary and not the product of coercion and/or promises." So, the child in question may refuse to answer any question, and may request to have a parent or lawyer present. This is something the investigators claimed in the documentary Dassey declined to do when he supposedly waived his Miranda Rights.

Police Aren't Required To Contact Parents Before Questioning A Child

In the series, Brendan Dassey's mother claims that investigators Mark Wiegert and Tom Fassbender did not initially inform her that they were going to be interviewing her son. Although, Mark Wiegert and Tom Fassbender claim in the documentary they did. "We contacted Brendan's mother told her we would like to take Brendan to the Manitowoc's sheriff's department so we could do a videotaped interview with Brendan to see what else he had maybe known," Weigart said during his testimony in Dassey's trial. In the documentary his mother responds to his comments saying, "He said I declined to go in with [Brendan] but I wanted to go in with Brendan, [the police] wouldn't let me." But hypothetically, is their interviewing Dassey without her permission within legal parameters?

According to the report on CriminalDefenseLawyer.com, police are not legally required to contact the parents of a minor they interview. As Dassey's public defender Len Kachinsky pointed out in the documentary, the police may not have wanted Dassey's mother present since she is Steve Avery's sister, and he was awaiting trial for the same case and could be a conflict of interest in the police department's search for the truth.

Anything A Child Says Can Be Used Against Them

In the scene featuring Dassey getting arrested, the investigators tell him that since he confessed to these crimes, he must be arrested. Even though he was a minor, if he agreed to speak with investigators, his admissions were considered voluntary and could be used against him, according to the previously stated law.

In Making a Murderer, Dassey was awarded a new lawyer in August 2006 when it comes to light that Len Kachinsky allowed him to be interviewed by a court investigator without the presence of an attorney. (Kachinsky, for his part, claims he was available by phone and that an investigator from his office was there.) The rights of the child are the same as an adult in which they are supposed to be read their Miranda Rights and have the right to remain silent, something the police claim Dassey chose to waive.

So, yes, technically it was legal for Dassey to be interviewed by police even as a minor and even without parental supervision. Whether he understood the implications of his words at the time is another question entirely, but it's worth watching Making a Murderer to decide for yourself.