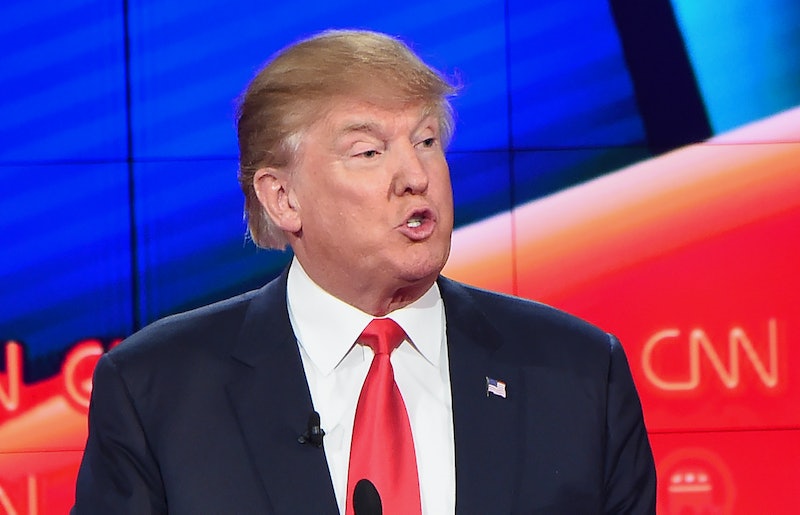 Not surprisingly, Donald Trump has once again said something flagrantly sexist; equally unsurprisingly, the target was Hillary Clinton. At a campaign rally in Grand Rapids, Michigan, Trump claimed that Clinton “got schlonged” during the 2008 Democratic primary race with Barack Obama, then called Clinton “disgusting” for going to the bathroom during the recent Democratic debate. These comments are amongst the many sexist things Trump has said in 2015, and like the others, they shouldn’t be quickly forgotten.

Of course, it isn’t as if Trump suddenly started being a misogynist this year. He’s been in the public eye for the better part of three decades, and many of his worst comments from his earlier years make his more recent sexism seem tame by comparison. There was the time he compared women to inanimate objects, the time he implied that sexual assault in the military is inevitable (“what did these geniuses expect when they put men and women together?”), the time he said that “a young and beautiful piece of ass” is all you need in life, and so on.

The point is, Trump makes sexist comments, and has done for some time. But in the interest of saving space, and retaining our sanity, let's look solely at the misogyny he's spewed in 2015.

Look at that face. Would anybody vote for that? Can you imagine that, the face of our next president?! I mean, she's a woman, and I'm not s'posedta say bad things, but really, folks, come on. Are we serious?

This clearly requires no context. It’s just a terrible, sexist thing to say about a woman politician.

Why does she keep interrupting everybody?

As I wrote at the time, Trump was playing to an outdated and misogynistic expectation regarding how women should behave when in the company of men.

This was actually the second time Trump referred to Huffington as “unattractive inside and out.” It was just as bad the first time.

Trump was referring to Kelly’s performance moderating the first Republican debate. To most, it was a clear reference to Kelly menstruating, but Trump later claimed he was referring to blood coming out of her nose. Then he retweeted someone who called Kelly a “bimbo.”

He made this comment in an an interview with The New York Times. Klum’s response was positively sublime.

Trump retweeted a supporter who sent this awful tweet about Hillary Clinton, then deleted it. Whether a copied-and-pasted tweet from someone else counts as Trump “saying” something is up for debate, but he indisputably gave the comment his stamp of approval.

She was gonna beat Obama. I don't know who would be worse, I don't know, how could it be worse? But she was going to beat -- she was favored to win -- and she got schlonged, she lost, I mean she lost.

“Schlong” is a Yiddish word for penis. “Schlonged” is not, as Trump later claimed, a word for “defeated.”

Trump said this after it was reported that Clinton took a bathroom break during a Democratic debate. Soon thereafter, Clinton’s Democratic rival Bernie Sanders remarked that Trump “has discovered that women go to the bathroom, and it’d been very upsetting to him.”

Trump made this remark while pointing to Tur, an NBC reporter with whom he’d recently had a combative interview, at a campaign rally. Tur tweeted that she got “sympathetic looks” from women in the audience.

More like this
We’ve All Had Bad Sex. Nona Willis Aronowitz Is Talking About It.
By Sophia Benoit
Why Eurovision 2023's Host City Won’t Be Revealed For A While Yet
By Sam Ramsden and Rachel Mantock
Naomi Osaka & Emma Raducanu’s Experiences Have Inspired A New Amazon Show
By El Hunt
It’s Official: 'The Bachelorette' Is No Longer A Fairy Tale
By Samantha Allen
Get Even More From Bustle — Sign Up For The Newsletter