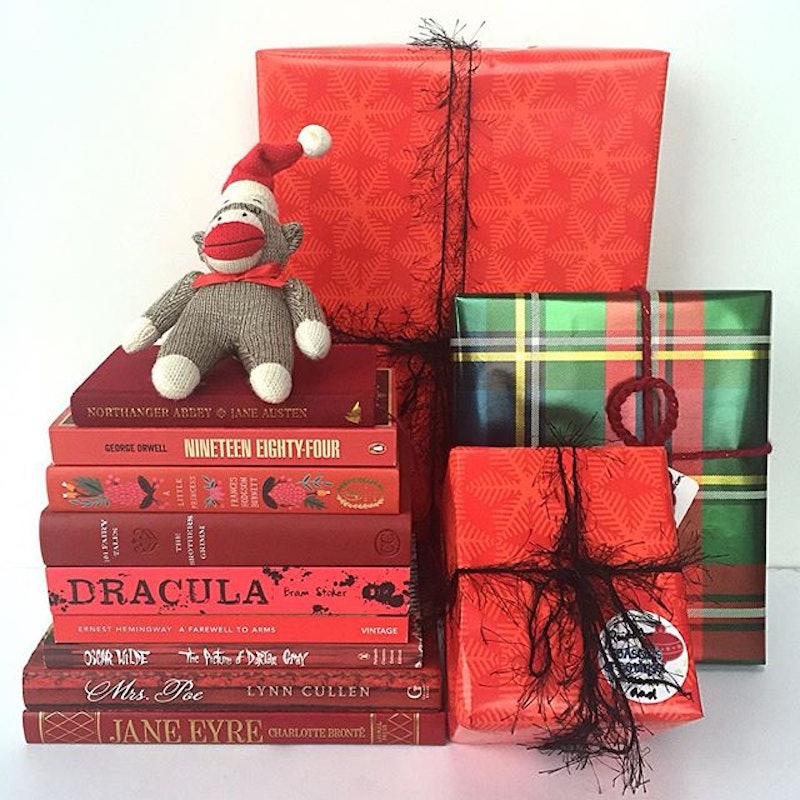 I love shopping online. No lines, no crowds, no searching for my size in a ransacked store display. Now, I don't spend a lot of money, as a general rule. But when I have to shop for other people, it's so easy to say, Oh, I should go ahead and buy this for myself while I'm at it. You can imagine the problems I have when it comes to holiday shopping.

Despite my personal issues, I think buying yourself a holiday present is a good idea. Now, I don't recommend going on a full-blown shopping spree before the gift-giving season, because — if your family and friends know you at all — you'll probably just end up with duplicate gifts by the time the new year rolls around. But there's nothing wrong with buying yourself something nice after the holidays are over.

You probably do something like this already, between spending gift cards and exchanging unwanted presents. Still, that's just buying your own gift on someone else's dime, isn't it?

We put a lot of focus on being selfless during the winter season, but sometimes that means sacrificing your own well-being for the sake of making others happy. That's not necessarily a bad thing, but it can be toxic, especially when it makes you neglect your self-care routine.

I think you should buy yourself a late holiday present — with your own money — to show that you care. These 20 books are great titles your loved ones might have overlooked this year.

1. Under the Udala Trees by Chinelo Okparanta

Set in the war-torn Nigeria of the late 1960s, Chinelo Okparanta's Under the Udala Trees centers on Ijeoma and Amina: two teen girls from different ethnic groups who fall in love.

The stories in Thomas Pierce's collection, The Hall of Small Mammals, rest where the cosmic and banal collide. From theoretical particles to formerly-extinct species, Pierce has all the absurd delight you can handle here.

I talk about this book every chance I get. Kate Bolick's Spinster is a memoir, a microhistory of single womanhood, and several biographies — all rolled into one.

4. Voyage of the Sable Venus by Robin Coste Lewis

The titular "Voyage of the Sable Venus" is the middle work in this three-poem collection from Robin Coste Lewis: an exploration of depictions of black women in Western art from antiquity to the present.

Aziz Ansari's debut examines dating in the digital age, from the perspective of a Millennial who's old enough to remember personals columns in the newspaper.

6. The Book of Speculation by Erika Swyler

Erika Swyler's debut novel, The Book of Speculation, follows a lonely librarian who must investigate a centuries-old mystery to find out whether or not there is a curse on the circus-folk in his family.

7. An Ember in the Ashes by Sabaa Tahir

In order to save her imprisoned brother, Laia becomes a spy for a resistance faction. Sent inside a military academy, she meets Elias: one of the academy's top students, and one of the Empire's most passionate enemies.

Another short story collection for the weird-minded, Lincoln Michel's Upright Beasts features romance among zombie hordes, disappeared adults, and a building full of neighbors with the same dark past.

This is the other book I couldn't stop talking about in 2015. Elizabeth Gilbert's Big Magic is a customizable road-map to creative living that anyone can use.

10. The Light of the World by Elizabeth Alexander

First Lady Michelle Obama's favorite book of the year was Elizabeth Alexander's The Light of the World: a memoir of the single motherhood that followed the unexpected death of the author's husband.

11. The Wake by Paul Kingsnorth

Paul Kingsnorth wrote this novel in a version of Old English updated for the modern reader. Don't let that put you off, though. The Wake flows like poetry as it describes the adventures of a band of landowners set on revenge against the Norman invaders who have destroyed their way of life.

12. Hunger Makes Me a Modern Girl by Carrie Brownstein

This memoir from Sleater-Kinney guitarist and Portlandia star Carrie Brownstein is a fierce and funny reflection on coming of age with Pacific Northwest punk.

13. A Manual for Cleaning Women by Lucia Berlin

This posthumous collection of short stories from Lucia Berlin reads like a survey of Tumblr's most-inebriated thoughts, mixed with the harsh realities of blue-collar life. It's utterly brilliant.

14. Between the World and Me by Ta-Nehisi Coates

In Between the World and Me, Ta-Nehisi Coates reflects on his experiences growing up black and male as his son is faced with the same in the wake of Ferguson.

Honestly, I'm still shocked that this book didn't take away honors from this year's Goodreads Choice Awards. If you're on the autism spectrum, or know someone who is, you need this microhistory on your TBR.

The Fifth Season marks the beginning of a new trilogy from acclaimed science fiction writer N.K. Jemisin. Three narrators tell the story as they journey across a continent-in-flux known as "The Stillness."

17. Signal to Noise by Silvia Moreno-Garcia

In late-1980s Mexico City, music-loving outcast Meche discovers that she can cast spells using vinyl records. Twenty years later, her father's funeral calls her back to the metropolis she left behind. When Meche meets up with a friend from her adolescence, she's forced to confront what happened to change everything.

18. Daughters of the Samurai by Janice P. Nimura

In 1871, the Japanese government sent five schoolgirls to the U.S., in the hopes that they would return to raise a new, modern generation of sons. But when the girls returned a decade later, they were on a different mission: to revolutionize education for women in Japan.

19. Not Dark Yet by Berit Ellingsen

After an affair brings up his violent past, Brandon leaves his boyfriend to live in the countryside. He teams up with his new neighbors to combat global starvation and applies for a new and different career path. Brandon's on a mission to completely change his life, but he might not know that yet.

Humankind has just made first contact with an alien race, and no one's quite sure what to do. As world governments debate nuking the potential threat, it's up to a rapper, a biologist, and a soldier to investigate and keep the peace.