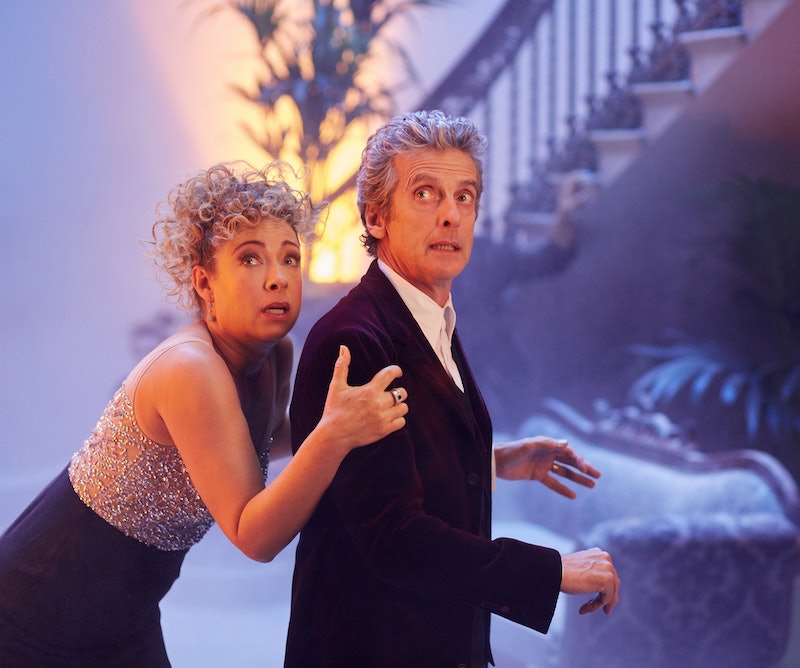 Endings are rarely permanent on a show that hinges on the concept of time travel. And thank the TARDIS for that freedom, because it enabled the return of Alex Kingston and her character River Song to Doctor Who in Friday night's Christmas special. Whovians have said goodbye to Dr. Song a handful of times already during her tenure on the series. And so, for that matter, have two regenerations of the Doctor. But with Clara Oswald's "beautiful" and "sad" exit in the season finale "Hell Bent" still stinging, another jaunt through time and space with the baddest girl he knows is just what the Doctor and his fans needed this holiday season.

The Doctor jokes in "The Husbands Of River Song" that one would need a "flow chart" to keep track of his acquaintances, companions, and — in this case — spouses. Any River Song appearance involves a quick assessment of the state of the Doctor/River union. Their timelines are wonky; their dates happen out of any semblance of a traditional relationship order; and one of them usually has the advantage of knowing the other better when they meet again face-to-face. Or maybe it's a disadvantage. The Doctor is clearly peeved to stumble in the path of a River who seems intent on not recognizing him. (He could tell her who he is, of course, but he wants to get his bearings in her scheme first. And he's hoping that she'll somehow figure it out on her own. That's his ego talking.)

But this episode marks the first time Kingston and Peter Capaldi have shared the Doctor Who screen, so this is a new face (and body) for River to get used to. Posing as the surgeon River called for her other husband King Hydroflax, The Doctor immediately allows himself to get wrapped up in her latest plot: to steal and sell the diamond lodged in the King's brain, even if she has to take his head along with it. The Doctor wants to do what he can to keep her safe and in check, but the cheeky banter is also too good to resist.

Headless androids, hissing Hydroflax subjects, and a prestige space cruise for genocidal maniacs all figure into this Doctor Who Christmas romp, but, in the end, the episode is all about the relationship between River and the Doctor. While he's still incognito behind his new face, the Doctor takes his chance to really see his sometimes-companion. He doesn't like what her demeanor reflects back on him. I've been frustrated with River's usage in the past, because she sometimes reads as a plot device to magic the Doctor out of scrapes instead of a robust character with her own motivations. This scene, where the Doctor realizes how careless he's been with River's feelings in part because her own exceptional origin tempted him to overlook what's human about her in favor of what's anomalous, seems to address that very critique.

Kingston gets to deliver a monologue that lends welcome vulnerability to River Song. It's always been my reading that, for all her confidence, River loves the Doctor more than she believes the Doctor loves her. ("Don't expect a sunset to admire you back.") And even if romantic love is either above, below, or beyond the Doctor, his affection and respect for River Song will not go undemonstrated this time. With Hydroflax defeated and the Starship Harmony & Redemption out of the sky, the Doctor plans the perfect date for his "known consort." He's booked them the "finest table in the universe."

River has always been a big talker, but the most insecure individuals usually are. And unrequited love is a special kind of pain, even for someone who could have any husband or wife in the universe. The Doctor tells River that she looks "amazing" at the restaurant overlooking the Singing Towers of Darillium, and she counters that he's not even able to make that determination. And maybe the Doctor's not able to woo her, or to love River in the way that she'd like, but how can she feel cast aside when her happiness means so much to him?

The Doctor has never come to terms with the fact that "ever after" isn't a promise that he can make — not to any of his companions. But River reminds him that humans (and pseudo-humans) can't even begin to understand the concept. She just wants to know that they'll be some time left to flirt, be beautiful, and enjoy each other before either of them has to go. The Doctor can't promise River forever, but 24 years isn't a terrible compromise.